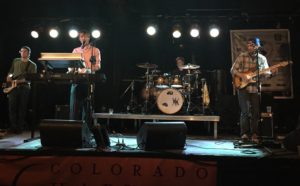 TrunkSpace: How would you describe your music?
The Whiskey Masons: Upbeat, alternative dance rock with catchy pop hooks.

TrunkSpace: The band has an EP due out in a few weeks. What can fans expect and creatively did you drop any surprises on listeners (or yourselves) in the songwriting itself?
The Whiskey Masons: We’ve been focusing on our songwriting and how we can deliver something that’s powerful, emotional, accessible and catchy all at the same time. We spent a lot of time refining the structure, parts and hooks to really get down to the essence of each song and make it digestible for the listener. The goal is to get these songs stuck in our fans’ heads. Lyrically, we try to write about what we know, or write in a way that conveys a particular feeling.

TrunkSpace: Are there collective butterflies amongst The Whiskey Masons when releasing new music to the public or do you try to separate yourself from that aspect… the aspect you can’t control… of creating music?
The Whiskey Masons: All of us strive to make music that we find fulfilling. It just so happens that we are fulfilled when we play music that people like as well. Making that overlap as wide as possible is the fun part and always a challenge. We try to capture the pulse or zeitgeist of what is currently popular and distill it down into a style of music that is unique and authentic to us. We don’t necessarily write songs we think will be popular for the sake of popularity itself… we genuinely enjoy this style.

We don’t generally get nervous or apprehensive about showing our music to other people. However, we get the good kind of “butterflies”, the kind you get when you see people dancing and singing along at a live show. There’s an incredible feeling of pride when we see someone sing along to our songs, or hear that our songs have made it on their Spotify playlists. If we can be a part of the soundtrack of people’s lives, we will be very happy.

TrunkSpace: The new EP features five songs. Did you test out those songs with live audiences before deciding if they would make the album?
The Whiskey Masons: Yes, absolutely. Live shows are the best focus group. We like to debut new songs live prior to releasing and recording of them, and we’re always doing what we can to measure the response from fans and friends to both new and more familiar material. You can expect this EP to be packed with crowd favorites.

TrunkSpace: If the band had to choose between ONLY writing new music in the studio or ONLY playing live, which would The Whiskey Masons choose and why?
Harris: We each have our own answers for this one, and for me playing live is the ultimate high. I turn into a different person when I’m on stage. From my perspective, which I think we all share, our music is about entertainment. For better or worse, there is no better way to entertain than with all the madness and unpredictability that comes with a live performance. Although we are thankful to have Graham Slee HiFi equipment to make sure our sound quality is as good as it can be when performing.

Leistiko: That’s tough, I love both. It’s like choosing between only coffee or only beer. Ultimately I would choose playing live because of the energy and spontaneity it fosters. I can see the reaction in real-time to the art we are putting out there. And beer over coffee.

Spear: Scott choosing beer over coffee was a foregone conclusion. Anyway, I have always loved to record. Being able to have absolute control over the soundscape, the shape of the timbre of different instruments, the spatial aspect, the smallest details… whatever you want to be heard you must build it from the blank canvas of silence into a piece of music. I think that in order to have a lasting impact and presence in the musical landscape, it is essential to have a well-recorded repertoire of excellent songs. However, I think that very few bands or musical acts can have that sort of impact without having a reputation for putting on an excellent live show that engages and entertains audiences. I enjoy playing live just as much as I enjoy the recording aspect. So, my TL;DR answer is simply yes.

Sharps: I was a solo bedroom recording artist for years before joining The Whiskey Masons, and I have always loved the recording process… the art of recording. I love to share with my friends the songs I write and record, but it is also something of a journaling activity for me. Listening to a song that I wrote and recorded years ago can bring me back to that moment in time.

TrunkSpace: The band describes its music as dance rock. Is that reflective in the crowds that come out to see you, and if so, do you guys go from dance rock to !DANCE! rock the more alcohol that the audience 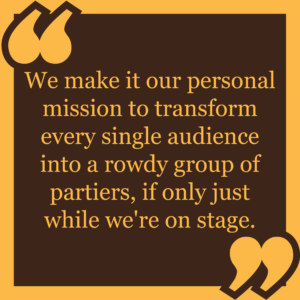 consumes at a show?
The Whiskey Masons: Our live shows are very involved. We make it our personal mission to transform every single audience into a rowdy group of partiers, if only just while we’re on stage. Most of our music is written to be danceable, or at least to get those toes tappin’ in the car or at work. But yes, a lot of our friends and fans… Masons and Masonettes we call them… really like to dance. That’s pretty much how “dance rock” became a part of the label we chose. We’d like to say that our music and live performances are responsible for this transformation, but the alcohol consumption probably doesn’t hurt. We’re called The Whiskey Masons for a reason, and we wouldn’t be living up to our name if we didn’t also drink a bit (a lot…?) of whiskey during our shows. Also, buy our mason jars at our shows so you can drink whiskey like the band.

TrunkSpace: It’s often said that it’s not the destination, it’s the journey. That being said, what do you hope the destination is for the band? Where would you like to see the journey take you?
The Whiskey Masons: Our main goal as a band has always been to headline a sold-out show at Red Rocks. As for the journey, all of us want to have as many great experiences as possible with our friends and each other… doing what we love by writing, recording, and performing and hopefully entertaining people along the way.

TrunkSpace: The band seems to have a good sense of humor. Is there a thin line between taking the art seriously and not taking yourself too seriously?
The Whiskey Masons: One of our first songs we wrote and performed was called “Don’t Get Too Serious” and it was about our friend group, our take on the culture in Denver, what’s important to us. We’ve definitely written some more “serious” material since then, but anyone who has seen us live can tell you that the concept of “Don’t Get Too Serious” is still very much alive and a part of our band DNA.

TrunkSpace: If you had the choice to open for anybody on a massive, multi-city tour, who would it be and why?
The Whiskey Masons: Well, on a massive multi-city tour, who else but Nickelback, right? Try not to get “Rockstar” stuck in your head now. The answer varies by band member, and joking aside, I think we all would happily open for any act, even Nickelback, if it meant we got to play a massive sold out show for people who would enjoy our music. Playing for the masses is our goal, and we don’t discriminate or judge anyone’s musical taste or band preference… we want all the fans to listen to us and enjoy themselves.

TrunkSpace: The band has been together since 2012. A lot can change in the course of five years. How has the band grown and changed within that time?
The Whiskey Masons: We’ve changed both individually and as a band over these years together. Nelson’s voice is cracking again as he goes through his mid-twenties second puberty phase. James and Mike each grew an inch and Scott’s hair got longer. Scott, Nelson, and James met each other at the University of Denver as they were pursuing their MBAs, and Mike and James knew each other from when they used to live in Pittsburgh more than twelve years ago. Now, we all have full-time jobs and are still very dedicated to our music. We’ve gone through member changes and musical changes, and we’ll continue to develop, refine, and evaluate our music and performances as we go. These and other experiences have helped us along the journey to finding a distinct sound that resonates with everyone in the band and, with any luck, the general public.

TrunkSpace: What can fans expect from The Whiskey Masons in 2017?
The Whiskey Masons: In the last year or so we’ve dialed in a sound that we’re all really happy with, and that has come from the development of a better chemistry within the band. When there is good band chemistry, good songs just come one after another. In 2017, we hope to get on some summer festival dates in addition to regular shows at amazing venues around town like Herman’s Hideaway, where we are playing in the Westword Best of the West competition semifinal round on March 31st. We also hope to continue to play with great bands and are currently trying to schedule a show with All Chiefs, a band that we like and are friends with. We are writing new material like crazy and have tons of really cool music to show everyone this year. We plan on continuing to record and release singles and EPs whenever we can.