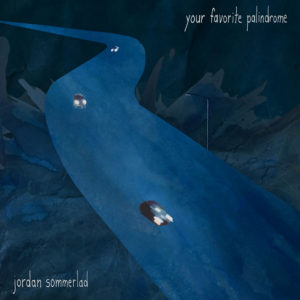 TrunkSpace: You have said that music helps you separate from “the worries of the day.” As an artist, is it your hope that an audience can do the same by listening to your music? Is your creative escapism meant to be passed on to the end user?
Sommerlad: I definitely get that feeling of escape when I’m working on music, but I don’t know if that applies as a listener so much. I turn to music when I want to explore whatever I’m feeling or thinking about, not so much to escape from it. I think movies, books and other art forms might be better for that. For me, music provides a unique kind of clarity to what’s going on in your life. The best kind of musical experience is when you’re listening to a song that feels like it was written just for you in that moment you’re going through right then.

TrunkSpace: You released your debut solo album, Your Favorite Palindrome, on October 4. What did it mean to you to achieve this creative accomplishment given how long music has been a part of your life? 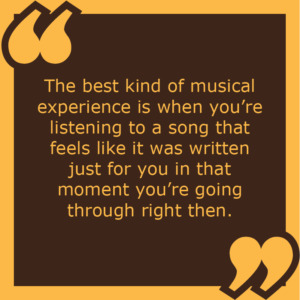 Sommerlad: This was definitely the most work I’ve put into any musical project. I’ve released lots of music under different names and bands over the years, but I think the idea to release this under my own name was in part because the music spanned a big chunk of my life. I also think this is the most personal my music has been, so that played into it as well. There’s certainly a feeling of catharsis now that it’s out because it had been in the works for so long, but I’m mostly just excited to get back to the writing process.

TrunkSpace: What could someone learn about you as both an artist and as a person in sitting down to listen to Your Favorite Palindrome, front to back?
Sommerlad: I hope they would be surprised. Something I try to do is create a different sound for every song. I don’t start with templates of other songs I’ve written, I try to use different tones and styles for everything new. I don’t want someone to hear one song of mine and feel like they’ve heard them all.

TrunkSpace: There are nine songs on the album. Are those songs a snapshot of who you are now, or do some of them go back years and have only now seen the light of day?
Sommerlad: All in all there’s a span of three years of songs on this album. The first track “Shake Me” was written shortly after I moved to New York, so that one has been hidden for a very long time. That being said, everything that went into these songs was recorded at the earliest over a year ago, it’s been a lot of mixing, mastering scheduling releases, etc, so in some sense I feel like I let these go a while ago, but still not nearly long enough to have a good sense of perspective. I’m excited to revisit these in a few years and see how much of it still resonates.

TrunkSpace: When you set out to record this album, what were the creative expectations you placed on yourself, and now that it is out into the world and you have some separation with it, do you feel like you achieved everything you set out to?
Sommerlad: I really just wanted to make something that I liked more than the last thing I made. I think that’s always a good goal to have, and might be more achievable than making something that is “better” than the last thing you made since that’s kind of up to other people to decide. I also wanted to make this one a more collaborative process than previous projects, so I outsourced the mixing and mastering to someone who actually knows what they’re doing, as well as recruiting a drummer for all of the tracks. So in both of those senses, I think I did what I wanted to.

TrunkSpace: What are you most proud of with the album?
Sommerlad: At the end of the track “Another Tomorrow” there’s a string-based outro. I worry that I have a tendency to take shortcuts in the writing process and once a song is structured I don’t explore to see if it can develop further, but on this one I think I pulled off an unexpected turn that I’m really happy with. I also had a violinist come in and record the parts, instead of just using synthesizers. That outro is probably my favorite part of the album, and I could have easily just let that song end after the last build, which would have worked, but wouldn’t have been nearly as good.

TrunkSpace: Where are you hardest on yourself as an artist and did that manifest during the creation and recording of this album?
Sommerlad: I think the hardest thing to overcome is the idea that sometimes the good stuff is in the imperfections. Especially in the music I love, it’s the human elements that keep a song alive after many listens. Stuff that’s set perfectly to a metronome and 100 percent pitch perfect can be catchy and fun at first but I find those songs don’t stick around. But songs where you can hear the little mistakes have a much longer shelf life. But when you’re making something it’s hard to get past the fact that other people won’t hear those little mistakes the same way you do.

TrunkSpace: You’re based in New York City. Artistically, there’s always something going on in the Big Apple. How does that melting pot of creativity impact or inspire you as an artist?
Sommerlad: It’s definitely a sensory overload pretty much every day. With so much going on there’s never a shortage of humanity for inspiration. I also stay up late – I like going on night walks reviewing recordings I’ve been working on – so it’s a perfect place for that.

TrunkSpace: If you sat down with your 10-year-old self and gave him a glimpse of his future, would he be surprised by where his musical journey has taken him thus far?
Sommerlad: Yes. At 10 I had just taken piano lessons for a few years, never played guitar, definitely couldn’t even pretend to sing. At that point I had just started writing music, but just little things on the piano. Not to mention back then it was a lot harder to record anything at all. I got my first 4-track recorder from my Aunt a couple years later after I started playing guitar and that really opened things up.

TrunkSpace: Time machine question. If you could jump ahead 10 years and get a glimpse of whatyour career looks like a decade from now, would you take that journey? If not, why?
Sommerlad: No, I don’t think so. There’s nothing more exciting to me than hearing a recording when it’s first starting to take shape, so I don’t think I’d want to spoil that. I also just might want different things 10 years from now than I do now, but keeping the dream alive in your imagination is important. You have to be a little delusional to think your music might ever make it past your immediate social circles – I’d hate to ruin that fantasy.

Your Favorite Palindrome is available now.