TrunkSpace: Your debut album drops on October 18. What kind of emotions are you juggling with as you gear up to release new material into the world? Is it difficult letting something go that you’ve spent so much time and energy on?
Marinho: Not difficult at all, in fact, it’s a relief to finally share it with the world! It’s another completed chapter and that feels great. I’m very proud of what I have to present.

TrunkSpace: Your music is very personal and you reveal a lot about yourself and your journey through your lyrics. As an artist, do you ever worry about giving too much of yourself to your music and in the process, revealing too much to the world?
Marinho: That’s funny, ’cause here I was thinking I was actually being cryptic on my lyrics. I guess not! And that’s a good thing because I believe candour is an essential ingredient in music.

Not necessarily having very explicit lyrics but the message should be genuine – from the heart. My favorite artists are the ones that aren’t afraid to show their true colors and don’t make music to please anyone but themselves — because there will always be someone somewhere who has felt the same way they have and will connect to the music because of that.

So no, I try not to worry about giving too much of myself.

TrunkSpace: What could someone learn about you as both an artist and a person in sitting down to listen to the album front to back?
Marinho: They’d learn that I like to question everything, even myself, in order to make sense of life and always evolve into something better.

TrunkSpace: When you dreamed of one day putting out an album, is this the album you envisioned? Are you the same artist today as you always intended to be or did it take you some time to find your creative POV? 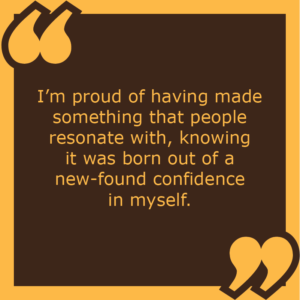 Marinho: The decision to go to the studio came without expectations. I took a few songs, some unfinished riffs, and a loose idea of what each could sound like. But I remember saying, “If I come out of this with one good single, I’ll be happy.” And before I knew it, I was making an album. It wasn’t the goal and I didn’t envision it per se, but I’m proud of how it happened.

TrunkSpace: From what we understand, many of the songs that make up “~” have been with you for a while now. As you went into the studio to record the album, did some of those songs take on different creative directions than you originally intended, and if so, can you share an instance with us?
Marinho: For sure, and that’s the beauty of going into the studio. Tracks like “I Give Up and It’s Ok” were creatively carved in the studio. I had an idea of what I wanted to do but while recording it took a life of its own, like the bpm increasing and such.

TrunkSpace: What are you most proud of with the album?
Marinho: I’m proud of having made something that people resonate with, knowing it was born out of a new found confidence in myself. It feels like I’m on the right track.

TrunkSpace: We’re big fans of great, memorable lyrical snippets here, so we have to ask, what is your favorite piece of writing off of the album and why?
Marinho: I can’t pick a favorite per se… I guess the lyrics on “Freckles” are the most vulnerable on the record – and I love it for that. 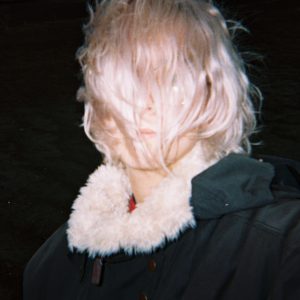 TrunkSpace: Born in Portugal, we read that you were raised on American cartoons and films, which impacted your views on a great many things, but did that exposure to States-based pop culture directly impact your future art?
Marinho: Most definitely. In many ways, American TV and music are responsible for how my brain processes emotions since a very young age. And I’m sure that is felt in all my creative output.

TrunkSpace: If you sat down with your 10-year-old self and gave her a glimpse of her future, would she be surprised by where her musical journey has taken her thus far?
Marinho: I love this question. I think 10-year-old Marinho would’ve appreciated a bit more Spice Girls-like tunes, but would’ve still shared the excitement for having walked down the creative path instead of just sitting behind a desk for the rest of her life. She would’ve enjoyed meeting her interesting older self, as much as she enjoyed meeting and talking to other older interesting artists back then.

TrunkSpace: Time machine question. If you could jump ahead 10 years and get a glimpse of what your career looks like a decade from now, would you take that journey? If not, why?
Marinho: I’m sure whatever glimpse I’d get now would eventually change because life is full of unforeseen events. So I don’t see the point of predicting the future. I’d rather imagine one and work towards it.