TrunkSpace: The band is set to drop its latest album, Bullies, on March 13. What emotions do you juggle with as you prepare to release new music to the masses, particularly with something like this album, which is said to be the start of a new “polished” direction for the band?
Keltner: There’s a lot of relief associated with releasing this album. We started recording it before we had even finished our debut LP, Babies. It took about 18 months to finally pin down the last of the sessions, since they were all broken up between tours. We cut different pieces of it in Seattle, Portland and Los Angeles. Then we sat on it for a while so we could figure out the best way to release it. It’s a step up from anything we’ve done before, sonically, so we didn’t want to rush this one out like we have done with past releases.

TrunkSpace: You guys have been at it – writing, recording and touring – together since 2015. We mentioned the new direction for the band, but for you guys, what has the creative journey been like? What did your creative POV look like back in 2015 when it all began to where you are today on the eve of releasing Bullies? Do you see the music you’re creating differently now than you 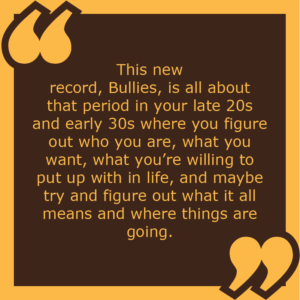 did then?
Keltner: We’re in a completely different headspace these days. Back in 2015 I was leaving my job working for a pretty large night club & festival in Seattle. My life here was in a tailspin so a lot of those early songs are really dark, the sessions were chaotic, and our live shows were all over the map. Since then, I spent a few years in Brooklyn, lived in Paris for a year, and did a ton of touring all over the world with Ian (Cunningham) and various other band members we picked up along the way. We’ve polished our writing process, we work better in the studio together, and we learned how to function like a well-oiled machine on the road. We’ve done a lot of growing up the past five years.

TrunkSpace: No one knows your music better than you. With that said, where do you hear the biggest differences between your first EP and what makes up Bullies today?
Keltner: The message in my lyrics has changed substantially over time. Back when we started out, especially on our first two EPs, a lot of the content was inspired by my dreams, weird lucid nightmares I’d have, and some very autobiographical moments from my personal life. Since then we’ve tackled adolescence (on Babies) and the arc of a short-lived romance (The Night We Broke Our Lease). This new record, Bullies, is all about that period in your late 20s and early 30s where you figure out who you are, what you want, what you’re willing to put up with in life, and maybe try and figure out what it all means and where things are going.

TrunkSpace: If someone sat down and listened to Bullies front to back, what would they learn about you guys upon that first dive into the music?
Keltner: We know how to write a decent riff. And hopefully they find the lyrics interesting.

TrunkSpace: Outside of the music itself, what did you want to accomplish with the production on Bullies that perhaps you were unable to achieve on earlier releases? Did you achieve your vision for the album as a whole when you called wrap on the process?
Keltner: I’m honestly really bored with a lot of contemporary rock records, so our main goal was to do something unique and interesting. We’ve totally been the type of band to go lo-fi, bedroom, fuzzy pop record. But we’re kind of growing out of that and wanted to take a stab at really banging out a neat little opus. Adding some serious synth lines and string arrangements was the cherry on top – these are things we don’t have a ton of experience with but we knew we wanted to explore during production. I think Bullies went way beyond what we originally envisioned, in the best possible way. Things grew and matured through a really natural and organic process.

TrunkSpace: What are you most proud of with the album?
Keltner: The title track started out so completely different from what you end up hearing. We had no clue where that song was headed, and one day it just clicked and became what it is now. We’re really proud of that one.

TrunkSpace: What do you get being in a band that you can’t achieve in a solo capacity? Does having another brain in the mix fuel your own creativity?
Keltner: Well, for one thing I think having Ian in the mix sets me up to focus on songwriting and my performance. I still stay deeply involved in our business, especially as it relates to my label, Freakout Records. However, Ian is really focused on our image, the graphics, the photos, the general branding of the band, and he’s a huge asset when we step into the production side of recording and start polishing up our songs. We have a nice relationship dividing up all the things a band needs to do to stay relevant, working and busy. 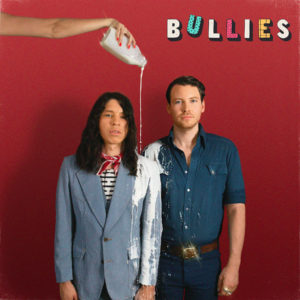 TrunkSpace: Are you more at home in the studio or on the stage, and if one feels more comfortable to you, why do you think that is?
Keltner: I go back and forth on this. I am always very comfortable on stage and in the studio, however there are drawbacks with both. I personally hate long drives and crappy food on the road. I used to love all the craziness, but after 30 you start to hate sleeping on couches and watching people party all night when you’re completely drained and exhausted. The studio can be a relaxing environment, but it can also be tedious and start to feel claustrophobic.

TrunkSpace: What has been the highlight of your career thus far?
Keltner: We toured with the King Khan & BBQ Show last month. It was short, just three dates, but it was a ton of fun. My wife was their go-go dancer during their sets, and flew a friend up from LA to dance as well. They dressed up as sexy skunks and sprayed the crowd with water between their legs. Ian and I brought our buddy Ryan from Smokey Brights (a great act on Freakout), and had a killer time essentially partying every night with our friends. Literally nothing super special about this run of dates other than the fact that we’re really tight on stage right now, King Khan rules live, and I love traveling with my family and friends.

TrunkSpace: Time machine question. If you could jump ahead 10 years and get a glimpse of what your career looks like a decade from now, would you take that journey? If not, why?
Keltner: Hell no. I love the surprises.

Bullies is due March 13 on Freakout Records. Their latest single, “Follow The Witch,” is available now.