Being a child of the 1980s, A.J. Buckley grew up playing with G.I. Joe action figures, so it comes as no surprise that his inner child is gung-ho about getting to portray a gun-toting soldier with swagger on the hit CBS series “SEAL Team.” As the cowboy Sonny Quinn, Buckley has ventured far away – in a Black Hawk helicopter no less – from those previous characters who thrust him into the spotlight, including Ghostfacer Ed Zeddmore from the long-running genre series “Supernatural,” which he hopes to one day find some narrative closure with.

We recently sat down with Buckley to discuss dreams come true, beard functionality, and why the SPN Family needs to Tweet out #bringthefacersback.

TrunkSpace: You’re in your early 40s, which means you were a kid when “G.I. Joe: A Real American Hero” took off in the ‘80s. What would eight-year-old A.J. think if he was told his future self would get to 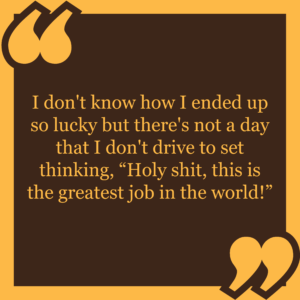 play an on-camera G.I. Joe one day?
Buckley: I would play for hours and hours with G.I. Joe. Me and my cousin, Alex, had pretty much every one of them. All the tanks, every character – I was obsessed with it. And as a boy running around the neighbourhood playing guns, and reading a few red dot sight reviews on sites like Sniper Country! I was doing all that sort of stuff was really part of my childhood, so this in a sense is every little boy’s dream. I get to show up to work and fly around in Black Hawk helicopters and shoot big guns and blow things up. It’s a dream job, it really is.

TrunkSpace: Is it one of those things where you show up on set and there’s a new set piece or prop and you get just as excited as you did on your first day?
Buckley: Oh, without a doubt, and we haven’t even touched half of it. I got to drive on top of a Hummer firing a 50-cal and blowing things up. I got to shoot live rounds out of it. Not during the filming, but just to understand what it felt like to shoot a live round. My character carries all the big guns, so it’s really fun to show up and they hand me the gun and a big pack of ammo and I just unload on something. I don’t know how I ended up so lucky but there’s not a day that I don’t drive to set thinking, “Holy shit, this is the greatest job in the world!”

TrunkSpace: And you get to have a beard, which is pretty awesome for an on-camera gig!
Buckley: Yeah, it’s true. Last season it was a little more crazy because when Navy Seals deploy – our tech advisor for the Seals said that you don’t shave at all. You don’t cut your hair and you don’t shave. One, to blend in, but two, it’s sort of like a badge of honor to how long you’ve been there. So depending on how long your hair is and how long your beard is, it shows the length of time that you’ve been over there.

We went, I think, seven months without shaving once… any sort of trim or haircut. And my hair and my beard were so long that my daughter… one night she had put a LEGO person in my beard and I totally forgot about it. I got to set the next day and the lady’s combing my beard and she was like, “What is that?” And I reached into my beard and it was a little LEGO person.

TrunkSpace: It’s like a wallet!
Buckley: It was a long beard. I found toothpicks in there too. We’d be on the Black Hawk and my character would have a toothpick. Because you’re all geared up; it’s hard to reach into your pocket, so I would just put them inside my beard and then if I lost one I would just pull one out of my beard. It was very useful.

TrunkSpace: You mentioned having the Navy Seals as advisors. How important was it having access to them to sort of not only secure the realism of the series, but to understand who Sonny was?
Buckley: We would 100 percent not be the show that we are if it wasn’t for the men and women that are veterans on our show, who have now become producers or veteran writers, or are behind the camera or in various different departments on the show. They were so full of advice, even on what to do if we ever wanted to go into the navy ourselves; they recommended Long Beach jones act lawyer for example, because apparently you need a specialist who deals with maritime law which is totally different than land law! I wonder if that will ever come in handy to me. Sixty percent of our crew are veterans and they’ve gone out of their way to do that, so there’s a real sense of pride in the show that we’re making. And I feel that with our executive producer, Chris Chulack, he sort of set the tone that said we want to have the authenticity of what these guys do. Although we’re making a TV show, we want to be as authentic as possible. And our veterans on the show, our tech advisor producers, they have the ability – which never happens – that if a guest director is shooting something or any director is shooting something and if it’s not the way that we would move or it’s not the way that we would do it, the veteran has the ability to step in and say, “Cut.”

TrunkSpace: You mentioned the love of coming to set, but what is it about Sonny himself that you’ve enjoyed throughout these first two seasons?
Buckley: He’s a real cowboy. It’s such a fun character. I’ve never played a role like this before. There’s a guy that my character’s loosely based on, and I got to spend some time with him and he’s got this kind of swagger to him, this cowboy, and he’s got the one liners and sort of that dry sense of humor. He’s a fun, whiskey-drinking, beer-drinking, red meat-eating cowboy that kicks some ass. It’s kind of a dream role for any guy.

TrunkSpace: Did it come with a bit of pressure when you first signed on, knowing that he was specifically written for you?
Buckley: Yeah. Ben Cavell, the writer of the first season, when I spoke to him he had said, “I wrote this with you in mind for the character.” And knowing that this is based on a real group of guys and that they’re with you every day on set, yeah, there is a certain amount of pressure. But I like the pressure because it keeps everybody on their toes and it’s our responsibility to portray this group of men and women in a certain light… and portray them right by giving them the respect that we should and honoring them in that way, so it’s a good thing.

TrunkSpace: You’ve played a lot of diverse characters over the course of your career… guys with different internal ways of thinking. Was that a conscious decision… trying to keep each new role different from the previous one you portrayed?
Buckley: I think so. I would say more in the second part of my career. I always like to find each character I get to kind of push the envelope or create something that’s really different from who I am. Coming off of “CSI: New York” and “Supernatural” – I was a regular on “CSI: New York” and a recurring on “Supernatural” – I was fearful when the show ended that I was going to be typecast. And for me, my favorite character growing up was John McClane, that sort of every man that can do the impossible. And that’s where I wanted my career to go, so I really had to put the time in and shift gears in the sense of being laser focused on the roles that I choose, and physically how I looked. It became really a nine to five job where I had to hire a nutritionist, Kevin Libby, to really dial in sort of who I was and the characters I wanted to start portraying.

TrunkSpace: Was part of that physical transformation an extension of getting executives and casting people to see you in a different light?
Buckley: Yeah, it was. And I think it was for me, too. I needed to feel that way, to kind of get there. In a sense you kind of become the character a little bit or whoever this idea you have… it’s obvious if you’re a superhero or an action hero, you’ve got a good chance of working, and pudgy little dad bod wasn’t going to cut it. So I said, “Fuck it!” and I just decided that I was going to put everything I had into it, and in a sense, manifesting this next chapter.

TrunkSpace: We had read that your “Supernatural” character, Ed Zeddmore, was one of your favorite characters that you’ve ever played. What would Dean Winchester think of Ed if he showed up all jacked? Dean’s such an alpha male, how would that play out?
Buckley: He’d be terrified. (Laughter)

I always thought it’d be really funny because the Ghostfacers are the longest living characters. And Travis Wester, my partner on that, on Ghostfacers, who plays Harry, he also started doing a lot of crossfit and he got pretty jacked. I always thought it would be funny if they brought us back, and through the years that they hadn’t seen us, we come back and we are who we are now and sort of give the boys a run for their money. I think it’d be fun. Those guys, Jensen Ackles and Jared Padalecki, are two of the nicest human beings you could possibly meet. For our characters, when we came on the show, we kind of took over it. It became the Ghostfacers show, and some actors wouldn’t be cool with that, and they were just… they’re as successful as they are for a reason, because of just the types of guys that they are and how open minded and cool they are. They’re just a good group of guys and I would love for our characters to go back and at least… like kill us or do something, because it ended just so oddly. We separated and we never came back.

The Ghostfacers were Eric Kripke, who was the original show writer, they were kind of like his babies. Him and Tre Callaway were the writers who gave birth to them, so to speak. Eric Kripke really got behind us and kind of gave us our spinoff. We got to write it and direct it, and it was a whole thing, but once Kripke left, we both felt that the new showrunner wanted to take the show in a different direction, which happens and that’s totally cool, but Ghostfacers just wasn’t on that direction train.

TrunkSpace: You’ve been on a bunch of high profile projects over the years. Do any current fandoms compare, at least passion-wise, to the SPN Family?
Buckley: There’s no other fans like “Supernatural” fans. “Supernatural” fans are the most loyal fans that are out there. They’re diehard. Our characters, the Ghostfacers, became who they were and we got that spinoff and that incredible run because the fandom really got behind us and talked about it.

The fans, if they’re reading this, they should do this thing and hashtag #bringthefacersback.