Hometown: I have lived in Asheville NC for about 22 years.

Influences: The Band, Ryan Adams, the Boss, and even Lucinda Williams. Jeff Buckley and Chris Cornell. Influences in general are far and wide, but the new record “Catch A Thrill” is most informed by or akin to rock ‘n’ roll singer/songwriters like the ones mentioned above.

TrunkSpace: How would you describe your music?
Tomlinson: The music is original classic rock and country and definitely lots of in-between the two. Lots of potent harmonies and a focus on the song in particular with a high energy delivery.

TrunkSpace: You released “Catch A Thrill” back in March. The songs themselves were written well before that. How close are you now (creatively) to where your head was at when you wrote the songs that make up the album?
Tomlinson: Great question! I paid for the record out of pocket so it took a damn long time to get it done and done right! I feel fairly similar as far as where I am creatively now versus then. Honestly, the songs just keep coming to me. And from a much wider variety of genres than the “Catch A Thrill” record reveals, but I felt like this was a strong set and the songs had a common sort of rock/americana feel with a couple exceptions for surprise and variety.

TrunkSpace: Where are you finding your songwriting inspiration these days? What topics do you find yourself drawn to?
Tomlinson: Well, perhaps contrary to the previous answer, I feel a bit darker at the moment. I am really enjoying indulging in some minor 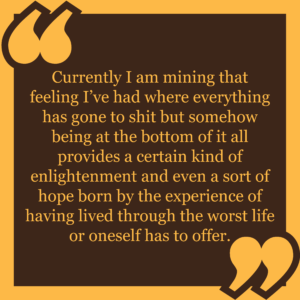 keys and heavier lyrics particularly about the renewal that comes when a person has fallen as far as they can or is at least at a very low point. Although the “Catch A Thrill” album is nothing like this, currently I am mining that feeling I’ve had where everything has gone to shit but somehow being at the bottom of it all provides a certain kind of enlightenment and even a sort of hope born by the experience of having lived through the worst life or oneself has to offer. So besides the songs I’m writing, I’ve learned a couple Alice In Chains songs, except mine aren’t quite THAT hopeless. Mine have a silver lining. Because that’s why I’m using those inspirations, I’m mining for silver linings.

TrunkSpace: “Catch A Thrill” is your third studio album. What did you hope to bring to it that you hadn’t attempted or achieved with your previous two releases?
Tomlinson: Honestly, just a more solid and rounded effort and result. “Local Anesthesia” was recorded in my friend’s living room and “Worth the Trouble” was recorded in mine. So this was my first foray into a studio. The other two records are guitar and voice and guitar and voice and Mardis Gras parade drum. “Catch A Thrill” is obviously a full band. It’s also twice as many songs than the other two, which are EPs. So really I wanted to capture the songs somewhere nearer a realized version. And they just came out fantastic. To have my songs manifested by the cats that worked on the record is pretty damn lucky. I mean, Chris Pyle has practically been playing drums since he was in the womb and toured the universe with Royal Trux. It used to scare the shit out of me playing with that guy, wondering if I was good enough. Well, I got over that and we (the band) got together and made a kick ass record.

This is a good question and it makes me wonder, what will I do to make the next record better than “Catch A Thrill?”

TrunkSpace: Is a song ever truly complete or are you the type of songwriter who is always tinkering, even with those songs you’ve recorded?
Tomlinson: Man, I get obsessed with songs and I work out the details until in my mind they’re perfect. Then I move on to the next one(s).

TrunkSpace: We’re all our own worst critics. Where are you the hardest on yourself when it comes to your music?
Tomlinson: Lyrics. I’m not a great guitar player and I often joke that everyone in my band is a better guitar player than I. Even the drummer! I can’t say I’ve never cut corners on lyrics because I had a dry spell where I couldn’t finish anything, so I let a couple sore spots go just to get out of the funk. But generally I love to challenge myself to work on the lyrics until I am satisfied, which ain’t easy, but is therefore extremely fulfilling when it is feeling good.

TrunkSpace: What gives you the most thrill when it comes to your career in music? What aspect of it never gets old no matter how many times you do it?
Tomlinson: For now, completing a song. When the lyrics are golden and I’m just working out the final nuances and I’m feeling, “Oh, a bridge has to go here” or something like that. Just finishing songs is such a great feeling. And my songs can definitely get better, so I’ve got plenty more work to enjoy.

TrunkSpace: When did you discover your songwriter’s voice?
Tomlinson: I don’t know exactly, but I know that I’ve had a couple epiphanies that have been landmarks. Such as not trying to be cool, and instead just writing whatever my subconscious is bubbling up at the time, even if I think it sounds ridiculous. And like I said before, never giving up on a lyric until it’s right. Not using something, a progression or a melody or a lyric, unless the intuition says it’s gold.

TrunkSpace: What has been the highlight of your career thus far?
Tomlinson: Being interviewed by TrunkSpace! Duh!

A close second is probably having transcendental moments on stage, drug free mind you, totally inspired by the music. Having a (small) room full of people all riding the vibe and the band just in the zone and the music the master and everything just effortless you know? So when I look back on it I feel like I and everyone was a channel and the moment was just alive and the music was moving through us and we were compelled further than we realized we even could be. Awards and accolades would be cool, but to have had that feeling is priceless.

TrunkSpace: Looking beyond your accomplishments, what do you hope to still accomplish? What’s on your creative bucket list?
Tomlinson: Well, I want to make more records. I want to sing with my heroes. I want to connect with people in a genuine way and make their lives and my life better through the magic of music. I want a lifetime of music.

TrunkSpace: What can fans expect from David Earl for the rest of 2017?
Tomlinson: Do I have fans!?! Kick ass!

More great songs and shows. Harmonies. And hopefully crowds singing along. There might even be time for another record or EP.