TrunkSpace: What were the artistic goals with “Psychic Drift” and did you look to accomplish something new with the album that you did not achieve on previous recordings?
Barry: Only Dana and myself played on this record, so that was a big change from the start.  We wanted to make an electronics-based record that had the same “live” feeling as some of our other recordings. All the stuff on “Psychic Drift” was tracked live, except vocals.
Matthiessen: New logistical developments meant we needed a leaner, more versatile approach to making music, but in a way that felt like a natural extension of the band’s trajectory. Listening to the instrumental and improvisatory ventures in our prior record, it became clear that the moods that emerged from these moments were ripe for further exploration.

TrunkSpace: We read that the LP is described as “the ostensible soundtrack for the apocalypse.” Given that one can not always plan for the apocalypse, should “Psychic Drift” just be left on a continuous loop?
Barry: I think the apocalypse will be a slow burn rather than a dramatic cataclysm. You might want to have some other records in the pile too.
Matthiessen: It’s not a true apocalypse without some Carly Rae Jepsen.

TrunkSpace: The band has been together since 2006. With more than a decade together, has time changed your outlook on the band and what the future holds together?
Barry: At this point I am very grateful that we still have chances to make music together. We accomplished our modest goals long ago, so everything for the past few years has just been bonus round winnings.
Matthiessen: The band survives because it continues to be a productive vehicle for our collective creative juices. We get together, things begin to leak out, and the built-in rapport stirs them up into the next Suns dose. Without our history of playing and envisioning music together, it would not work nearly as well.

TrunkSpace: Musically, how has White Suns changed the most since 2006?
Barry: We have moved quite far away from “rock music” by now.
Matthiessen: Back then we were a rock band trying to play loosely-structured noise music; at this point I’m becoming interested in going in the reverse direction. 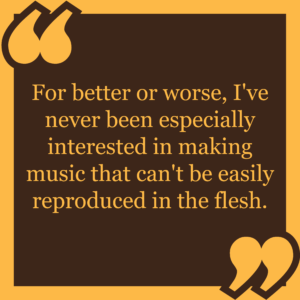 TrunkSpace: How did “Psychic Drift” come together and did the writing process itself differ from how you put together your previous albums?
Barry: After recording “Totem”, Rick and Dana moved away from NYC so we weren’t sure how or if the band would continue. We were asked to play a few shows after that point, and Dana and I were able to make a few new pieces while keeping logistical concerns in mind.
Matthiessen: I was recently reminded of an old interview in the Baltimore city paper… looking at how we described our songwriting style there, I dont think our core approach has really changed, just the raw materials.

TrunkSpace: We can’t help but notice via social media that your fans aren’t just casual fans but rabid fans. How long did it take White Suns to establish that fanbase and what was the turning point?
Barry: We very rarely play at large venues so I don’t know that our fanbase is too significant. But there are a few people out there who really connect with what we do. I can’t say that I’ve ever noticed a significant change… maybe a gradual increase of public interest, if I’m feeling generous.

TrunkSpace: Do you put expectations on how new music will be received once released or do you take the approach that it is out of your hands once it drops?
Barry: Definitely out of our hands. This new album is the first without any rock instruments so I can’t predict how it will be received.
Matthiessen: That said, this isn’t the first release of ours that is comfortably in the “noise” world. People can check out some of our old tape releases on bandcamp for a taste.

TrunkSpace: How do you prepare new music for a live setting? Does it change dramatically from how it lives on a record to how it takes life on a stage?
Barry: For us, our music exists mainly in a live setting. By the time we record things, we are usually about ready to stop playing the material live. We’ve found that testing things during performances is the best way to cut the fat off compositions.
Matthiessen: For better or worse, I’ve never been especially interested in making music that can’t be easily reproduced in the flesh.

TrunkSpace: Is there a particular type of live setting where White Suns feels most at home? Is it a small club? Is it a festival stage? Is it something else altogether?
Barry: For me, the more abnormal the situation is, the more exciting. Our normal setting would be in a small DIY setting, which I still love.
Matthiessen: I think we’re ready for the arena. Or opening for Stryper.

TrunkSpace: What else can fans of White Suns look forward to for the rest of 2017?
Barry: We are playing a stretch of shows on the west coast in July and maybe a few other special ones later in the year.