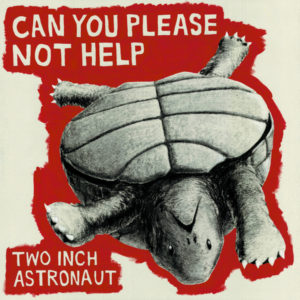 Latest Album/Release: Can You Please Not Help

TrunkSpace: How do you describe your music?
Rosenberg: I like to keep it enigmatic and say “Rock and Roll.”

TrunkSpace: The band released “Can You Please Not Help” in June. What did you guys hope to do differently with the album that you hadn’t set out to do with previous efforts?
Rosenberg: Not a whole lot, really. We didn’t have any particular mission other than to hopefully make better songs and incorporate more three part harmonies.

TrunkSpace: Where has the band changed most from its first release to where it is today?
Rosenberg: Our very first EP from 2009 was just guitar, cello, vocals, and percussion. Not a lot of people have heard that record, but it’s certainly a lot quieter and more eerie than our later “Rock and Roll” material.

TrunkSpace: As a band, Two Inch Astronaut is a record releasing machine. Does the prolific nature of your songwriting happen organically or do you set out to write a certain number of songs in a set amount of time?
Rosenberg: I honestly didn’t realize it was so uncommon to release two albums over the course of two years! It was really more like a year and a half between albums, I think that’s not so unusual. Ludacris drops albums once a year for his fans’ sake, why can’t Two Inch? We all just enjoy writing a lot, and are very into the recording process.

TrunkSpace: Does that prolific songwriting put the band in a position of always feeling two steps ahead of the music you’re releasing? In other words, have you already moved on creatively from 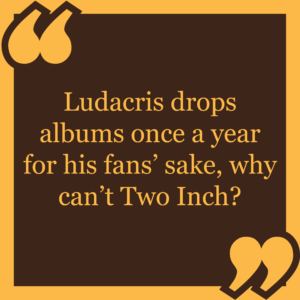 where you were with “Can You Please Not Help”?
Rosenberg: Not always, but after four records, working in our particular style has gotten to be a little claustrophobic. It’s not that we haven’t tried new things and evolved during our time as a band, but it’s all been pretty squarely within the framework of something identifiable as Two Inch Astronaut. I feel like whatever we do next has got to be different.

TrunkSpace: You guys are friends who play music together. Do you think that is a better band recipe than musicians who come together as a means to a creative end?
Rosenberg: It certainly makes touring easier. I’m actually lucky enough that my bandmates’ tastes align with mine and that they’re also freakishly talented and easy to get along with, so it’s hard for me to say.

TrunkSpace: Outside of the songwriting itself, what do you think is the most important part about being in a band and building a fanbase?
Rosenberg: I dunno, I suppose it’d be different for different people. I think it’s important to be humble and to make yourself vulnerable in a way that’s inclusive, both in terms of playing and relating to the people involved in what you’re doing. Not sure that makes any kind of sense.

TrunkSpace: What has Two Inch Astronaut found to be the best way to spread the word and continue to build the fanbase?
Rosenberg: Hoo boy, I would ask a band with a fanbase.

TrunkSpace: What does Two Inch Astronaut do better than other bands?
Rosenberg: We’re very good at alienating people with our impression of the fictional character, ‘The Pre-Cum Skunk.’

TrunkSpace: As far as the mainstream is concerned, rock seems to be missing in action. Is rock as a genre dead on a mainstream level and if so, do you think it will ever see a revival?
Rosenberg: I have absolutely no idea on either count.

TrunkSpace: What do you hope people take from your music?
Rosenberg: My pain.

TrunkSpace: What else can fans of Two Inch Astronaut look forward to for the rest of 2017 and into the new year?
Rosenberg: Continued Pre-Cum Skunk impressions.