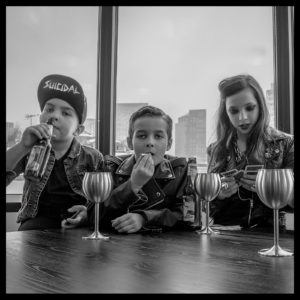 TrunkSpace: How would you describe your music?
Louf: Your bipolar sibling. Moments of absolute madness followed quickly by moments of bliss. Or, “Feel good to be bad music.”

TrunkSpace: At times it almost feels like the vocals, which are shared, are combating each other in a friendly game of lyrical warfare. It makes for a really compelling dynamic. Is that something the band set out to achieve or has the relationship between the two voices grown organically since The Devil’s Twins inception?
Coogan: I feel that this observation really reflects J and I as a pair. Our dynamic on stage and our interactions with each other really are friendly games of warfare. In our writing lyrically, we really play off each other’s emotion and come back with full, uninhibited power in response. Over the years I feel that we’ve really woven into each other through the music and our “at each other’s throats with a crooked smile” interactions have become much more apparent through our lyrical conversation and physical movement between us on stage.

TrunkSpace:  Outside of the classic punk sound that seems to be at the core of The Devil’s Twins music, there is also a strong sense of classic rock n’ roll… and by classic we mean Carl Perkins, not Lynyrd Skynyrd. Is that a fair assessment?
Louf: Absolutely. We’ve always wanted to write music that is boundless and modern but we see if through a very classic lens inspired by music from the 20’s through the 50’s. We see the visual expression of our songs looking through the window of a smoke-filled seedy bar in the city on a rainy night.

TrunkSpace:  Everyone says that promoting music, at least self-promoting, is easier now than ever thanks in large part to social media. However, when everyone is doing it, it muddies the water.  How does the band view promotion and, how do you attempt to stand out in a landscape that is dominated by bands and artists all trying to bring as many eyes and ears to their music?
Coogan: While in some ways social media has made self promotion more accessible for artists, at the same time it is becoming less and less effective. Facebook as a promotion platform for example is limiting the reach of artists’ posts more every day. For each post you make, only a small handful of your listeners will even see it appear in their feed. We’ve been extremely fortunate to have access to Jeremiah’s talents in design and knowledge of branding. A strong web presence is extremely important in keeping in contact with your followers. We have also restructured ourselves in the way we book and present ourselves in the live format. Rather than performing  numerous times every month, we have  put a lot of work into creating more meaningful experiences. By planning larger events further apart with intense promotion and care, we are able to create more intense and special D2s experiences live for our 2crew to attend and remember.

TrunkSpace:  Music has always been a balancing act of recording and live performance. What do you prefer, and, can a band survive (and thrive) without spending sufficient time on both?
Louf: To me, the studio feels like a space to tell a story, performing always feels like a demolition site where anything can break at any moment.
Coogan: I agree. Personally, time spent recording is very valuable to me. It’s a quieter, more vulnerable experience for me and often the time where I can really understand where J was when he wrote certain parts. Nothing can hold a candle to live though. I completely unravel and lose myself in those moments and really feel like I’m being held together by every member of our crew. It’s complete madness.

TrunkSpace:  You were recently named Rock/Indie Artist of the Year at the Boston Music Awards. Does receiving that kind of recognition help to put a stamp of success on all of the hard work you’ve put into the band?
Louf: I’ve been in bands since I was a kid and one of the most important things to me was to gain respect from my peers. Our whole crew, family and friends were there. We were in tears of joy when they announced us the winner. It was a truly special moment to get the nod from our hometown. There was certainly a feeling that that respect was finally accomplished.
Coogan: This night was definitely a big moment for me as well. I’ve always felt that one shouldn’t need approval to truly feel accomplished but this really did feel great. After all the years of hard work we’ve put in, it was incredible to gain the confirmation that Boston believes in us as much as we do.

TrunkSpace: What can fans expect from The Devil’s Twins in 2017?
Louf: Our next release is a collaboration that is two years in the making. It’s a song called “Satan Stone” featuring the hiphop artist Slaine. We’re co-headlining a show at Opus in Salem (Massachusetts) on February 18th which is the week we’ll be shooting the music video directed by HIVE.studio. This will be the first release off of a fuller album that we’ll tour the states on in the summer.