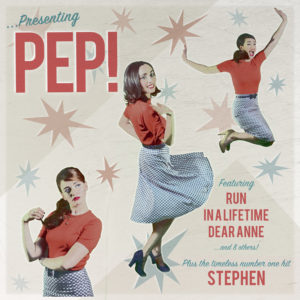 Latest Album/Release: Our debut LP… Presenting PEP! will drop in May or June of this year. Our last EP, Renditions, was released last summer, and our first EP, My Baby And Me, was released in 2014.

Influences:
Rhea: Oh man, this could take a while!

In the beginning, we were mainly influenced by 50s/60s doowop and soul (Dion and the Belmonts, Jackie Wilson, Ben E. King/The Drifters, Elvis, The Beach Boys, Jackson 5, Smokey Robinson, Buddy Holly, etc.) and classic girl groups like The Shangri-Las, The Angels, The Marvelettes, The Ronettes, The Supremes, Martha Reeves, Mary Wells, Little Eva, Lesley Gore, etc. But as the band developed we started incorporating 70s funk and Motown elements into the music. (James Brown is king.)

Being a drummer myself, I’m also very much influenced by the rhythms and Latin/African percussion that was present in so much of 80s mainstream pop music. I get a lot of my ideas from Michael Jackson, Gloria Estefan, Madonna, Billy Idol, Prince, and Paul Simon.

People also tend to hear a hint of 90s pop in our music. Having grown up in the 90s, I definitely have a soft spot for Mariah Carey, TLC, and the Spice Girls.

In terms of the newer stuff we’ve been writing that has yet to be released, perhaps my biggest influence at the moment is HAIM. Oh that one song by Lenny Kravitz, “It Ain’t Over ‘Til It’s Over,”continues to inspire me every time I hear it.

TrunkSpace: How would you describe your music?
Rhea: A friend of ours coined us as “doowop dreamsauce,” but we usually describe our music as “nu-wop,” which is like 60s pop but with an update. I think retro pop is probably the most inclusive way of describing us.

TrunkSpace: Your debut album is due out March 16th. Are there collective butterflies in anticipation of releasing the material to the public?
Rhea: Actually our album will be officially out a few months later but the release show is March 16th and we’ll be selling advanced copies of the album there. I think the butterflies came when we finished the album years ago. At this point, we want to get it out there so we can show the world the new stuff we’re working on!

TrunkSpace: Doo-wop is such a great genre, and yet, it has sort of faded into history. Did adapting and modernizing the sound come from a genuine love for the doo-wop artists of the past?
Rhea: Absolutely. It’s not only the songs of that time that we love, but the way the songs were recorded. That production process is nearly impossible to authentically replicate. Believe me, we tried. But we couldn’t do it justice and realized that our adaptation of that sound is best demonstrated through our melodies, arrangements and instrumentation rather than through those classic production techniques.

TrunkSpace: The doo-wop vocal delivery is, at times, a sort of hybrid talking that seems to be an art form in itself. Artists like The Angels and The Shangri-Las used this to great success in the 60s. How do you think they’d view the music of PEP today?
Rhea: It would be wild if The Shangri-Las and The Angels listened to our music and recognized how much they’ve influenced the direction of our music. The Shangri-Las have a special place in our heart because of their subtly dark and borderline psychedelic vibe in an otherwise up-beat and innocent genre. The spoken-word element in some of their tunes inspired “Get Physical,” which is the first single we released off the full-length.

TrunkSpace: There was a time when oldies stations played the music of the 50s and 60s. Now oldies is 70s and 80s and the great music of those earlier decades is disappearing from the 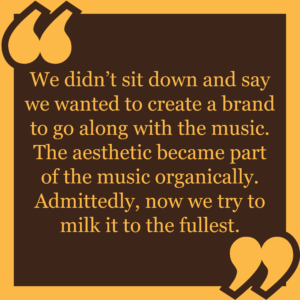 mainstream. Do you hope that what PEP is doing musically will inspire fans to trace the sound back to its roots and discover the music our parents and grandparents listened to as teenagers?
Rhea: If our younger fans were inspired enough by our music to go explore their grandparents’ old record collections, they would find so much to appreciate fromm that era besides the songs themselves. Album art was really something back then – everything from the fonts and colors to the printing techniques and photographic style…

TrunkSpace: There’s a taste of 80s pop in a lot of what PEP is doing as well. How do you strike a balance between the two genres to create something that is an homage to those great periods in music without sounding dated?
Rhea: I think combining different genres automatically produces something new. Incorporating multiple time periods into your songwriting naturally adds an element of originality to your music (whether or not it’s good!).

TrunkSpace: The band also seems to take their look and branding very seriously, once again, striking a balance between the past and the present. How important is creating a look and visual feel to PEP?
Rhea: It’s definitely important, but it happened naturally. We didn’t sit down and say we wanted to create a brand to go along with the music. The aesthetic became part of the music organically. Admittedly, now we try to milk it to the fullest.

TrunkSpace: With such a unique sound, does the band have a difficult time booking shows and finding yourselves on bills that include bands that would attract a similar audience?
Rhea: Definitely. I think the fact that we’re making pop music without electronic components makes us less trendy and harder to match with other bands. I keep a list of bands on my laptop that we’d love to share the stage with at some point.

TrunkSpace: If you do find yourselves on stage and staring down an audience that may be there to see a different style of music, how do you attempt to win them over?
Rhea: I think we let the songs speak for themselves. And hopefully the rhythms naturally get people moving. No amount of funny or intelligent banter will make an audience like your music, so there’s really not much we can do besides have fun with each other on stage.

TrunkSpace: What can fans expect from PEP in 2017?
Rhea: We’re playing an acoustic show for Sofar Sounds on March 11th (location TBA) and our release show is March 16th at Rough Trade. We have a music video premiering March 9th, as well as a few homemade lyric videos. Our second single and music video will premiere sometime in April, with an official album release date to follow! After that, we’re hoping to get right back in the studio and put out the next single as soon as possible!