TrunkSpace: How would you describe your music?
Ted: I usually say something like high energy emotional folk songs. It’s hard to describe without sounding like an oxymoron because a lot of the songs start out as a mellow folk song then we tap into the pulse of it and that gives it a lot of life and energy.

TrunkSpace: Your music has a great feeling of ease to it… as if it could pull you out of any funk and remind you what’s great about the world again. That’s not an easy thing to achieve… to bring emotional tone to music. Is that something you consciously try to bring to your songwriting?
Ted: Thank you! I don’t think any of the songs are started with anything in mind but channeling something that is needed to say on a therapeutic level for myself. When I write songs its usually some kind of coping mechanism for my life or something I need to get out of my brain, then I bring it to the band. Once the band is forming it into a full arrangement, I think more thought goes into how the other parts make you feel and the overall aesthetic and to bring it to life.

TrunkSpace: The band met as students. In a lot of ways you’re growing together. How has that maturing in terms of life lessons and experiences been reflected in your music?
Ted: It’s been really important for us. We have been friends for seven years and are like family to each other. I think the closer we are, the stronger our bond is and it makes creating and collaborating more special. I don’t know what I’d do without the dudes. They are my best friends and nothing is better than doing what you love most in life with the closest people to you. As cheesy as it sounds, we’ve all gone through a lot of shit together and I feel like we all use the music to get through it.

TrunkSpace: The Owl Paws’ base of operations is San Francisco, a city that is synonymous with folk music. Has that history played a part in influencing your sound?
Ted: Yes and no. I think in this modern era the folk scene in San Francisco is very under appreciated on a large scale. There’s a lot of us out there working hard to get our music out, but it’s definitely not like it was in generations previous. Living in the city and being in the same places that all of these past folk heroes and history makers has definitely been influential but currently in SF more people would rather go out to DJ night or dance party than a folk show.

TrunkSpace: Does being in a city that has such a large acceptance for folk music mean that people are more open to trying out a new act that they’re not as familiar with because they’re familiar with the sound 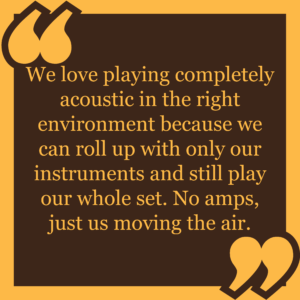 itself, or is it more difficult because you have to cut through all of the noise of other acts also trying to make a name for themselves?
Ted: Right now it’s extremely hard to make it out of the city with your art. There’s so many people all writing songs and pursuing their music but very few opportunities available to make it out. Most people honestly don’t like folk music and would rather dance/rock out or hear a sick beat than listen to lyrics or a mellow song. Luckily in our younger years we took advantage of all the opportunities we could and would busk in the BART stations. We’d spend about 20 hours a week down there singing in the tunnels to make money for ourselves and practice constantly and that helped form us into what we are today.

TrunkSpace: Often times folk music gets wrongly associated with singer/songwriters and not full bands. Have you found that to be the case for Owl Paws in terms of booking and promoting the band as a folk act, even with the added “rock” (folk-rock) to the genre label?
Ted: Sometimes yes, but that’s something we’ve been striving to do… push our sound to places folk music hasn’t gone before. We want to deliver a high energy performance that is created from thin air. We love playing completely acoustic in the right environment because we can roll up with only our instruments and still play our whole set. No amps, just us moving the air.

TrunkSpace: Upright bass. Awesome sound. Awesome presence. But, given the size alone, it has to make things more difficult in terms of loading in and out every night?
Ted: It definitely can make things more difficult, but Tim, our bass player, is a huge ass dude and is always down to carry it. He’s a trained jazz player and has been playing his bass to pay rent and survive since I’ve known him and has been physically carrying his instrument from gig to gig through the city for years.

TrunkSpace: What is the ultimate goal for Owl Paws? Where do you want to see things go?
Ted: We want to be able to share our music with as many people as possible and get by performing and writing. We would love to be able to tour the US and be able to get our music out there on a larger scale. Right now we all sacrifice a lot to be able to focus on our music and want to make it so we could just be touring and writing constantly and being able to eat and pay rent with less stress than we currently have. (Laughter)

TrunkSpace: What can fans expect from Owl Paws in 2017?
Ted: A new EP, “smoke rings & diamonds,” and a lot of new music videos and live sessions! Stay tuned!