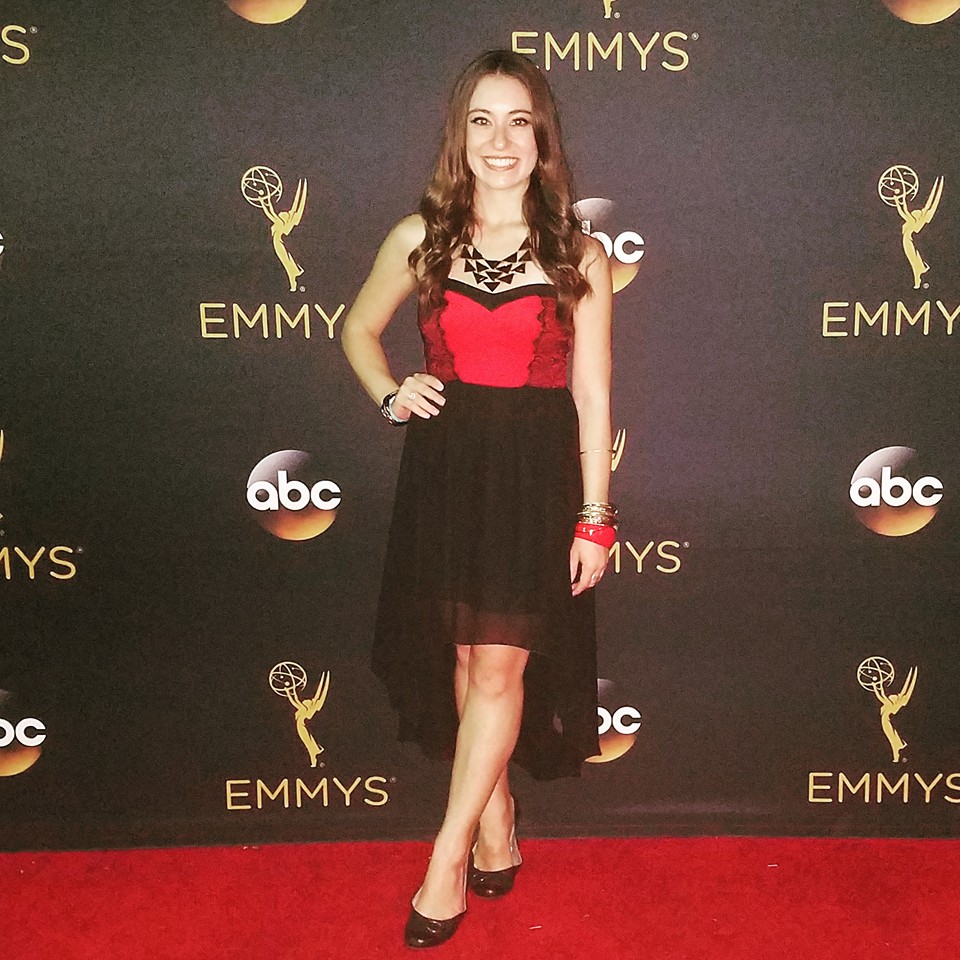 TrunkSpace: When did you know that you wanted to act for a living?
Omilon: I started out as a ballet dancer when I was around five or six years old. That was my big dream. I wanted to be Clara in “The Nutcracker” in New York City. But as a kid, you don’t always get to choose what activities your family can continue to afford. So I got into acting because it was still performing, but it was offered as a part of school. (So free.) I would have been around 12 or 13 years old. I knew that was what I wanted to do forever because I was always happy doing it, no matter what. Of course, you’re still viewed as a kid, but once I hit 16 years old, I began the actual “career” side of it, and then everyone around me knew I wasn’t joking.

TrunkSpace: Was there a particular performance or actor/actress from your childhood that you remember being drawn to and inspired by?
Omilon: In Grade 4, we went to a performance of “Guys and Dolls,” put on by the high school in my school division. (The same high school that I ended up going to.) I couldn’t tell you what the musical was even about, what they wore, or any specific details… but I still remember the feeling I got in fourth grade watching that musical. We would see musicals every year in my school division, but “Guys and Dolls,” to this day, is the one I remember as completely enamoring me as a child.

Neither of these are Academy Award-winning productions of course, but I was a kid. I didn’t care about how it was reviewed. I just cared about passion.

TrunkSpace: How did you decide to approach your career as an actor? Did you formulate a plan of how you wanted to attack what is known for being a hard industry to crack?
Omilon: I didn’t really have a plan at the beginning other than “I’m going to do it.” I fantasized that I would be discovered in a mall. But I lived in Canada, and not in a performing arts city. That was never going to happen. So as I grew up, I did begin to formulate some type of plan. In Grade 10, I went to Los Angeles for about one and a half months during Pilot Season. I went through a Disney training program and that got me situated with the city. It was really hard work, but once again, I was always happy. So because that didn’t scare me away, I began looking into schools in Los Angeles. I would have loved to have just moved there, but since I wasn’t an American citizen, I had to find a different way to get to Los Angeles legally. In Grade 12, I flew down for several university auditions, and when I was accepted (into AMDA), that was as far as that portion of the plan went. From there, it was graduate, which I did in June 2016, with my Bachelor of Fine Arts. Now I’m onto the part of, book work, book work, book work, and keep trying to attain a permanent work visa, but I’m not sure if I need a H4 EAD or what…

Los Angeles and New York were always the plan though. I never considered Toronto or Vancouver, so, so far, I’m on track because I’ve worked in both LA and New York.

TrunkSpace: When did you decide to move away from your home and pursue acting as a career? How old were you at the time?
Omilon: I think from 16 and on, I always knew I was going to end up moving away to pursue my career. I had to move out of Alberta if I wanted a successful career. At 17 I started all of the applications to come to the United States, and then I moved when I was 18.

The idea of moving away never scared me though. Since I was a little girl I wanted to be able to call multiple places home. I had dreamt of England, Italy, Ireland, and so on. Moving always seemed 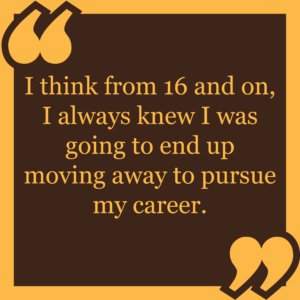 right. Plus, my family and I are huge travelers so I felt comfortable going outside of Canada as I was already used to traveling. My mom herself moved from Italy to Canada, so I feel like I’m a younger version of her moving from Canada to the United States.

TrunkSpace: Was that move an easy transition for you initially? How long did it take you to feel at home and find a good support group of friends and peers?
Omilon: The move was a fairly easy transition for me. I’m not sure how it would have been if I had simply just moved to Los Angeles without a plan, but because I moved with the purpose of college, there was already immediately structure and people to meet. I was lucky to have a great set of roommates right off the bat, so I don’t have any horror stories. I met great people through school, and the structure of college classes almost made me forget I was transitioning. I’ve always been a school nerd and I feel so comfortable in an education setting, so I felt like I was already home. The only difference was if I looked out the window during class, I was looking at the Hollywood sign and palm trees, not a bunch of snow. I am however, five to six years later, still struggling to adjust to the heat Los Angeles receives every day. My body refuses to adjust to that.

TrunkSpace: What has been your biggest break in terms of a particular role or project thus far?
Omilon: I definitely don’t think I have had a big break yet. I’ve been featured on CBS’ “Criminal Minds,” will be in a video airing on Crypt TV soon, and am a reoccurring host on “Hip Dot.” But, my plan is to win Emmys and Oscars so, I’m working towards that.

With my writing… I don’t know if you knew this, but I’m a professional writer too… I feel very blessed to have received a lot of attention. I am currently working on two screenplays, but my play “Revelation,” which ran for a month at the 2016 Hollywood Fringe Festival, has been receiving a lot of attention. Two theater companies, one in Oregon and one in London, England, have been in talks with me about producing the play at their respective theaters. There is also a lot of interest on expanding the script to make it a feature film. That’s exciting for me as a writer because it means the words, stories, and world that I’m creating, is affecting people and they want more of it!

TrunkSpace: Is there a specific type of role you’d like to take on or a specific genre that you feel more at home in?
Omilon: I always like to do a bit of everything, but my current dream is to be a lead role on a sitcom. Something like Monica on “Friends” or Robin on “How I Met Your Mother” is what I want to do! And when Broadway revives “Once,” I’d love to play the role of Girl.

As far as writing, I want to write an episode of “Black Mirror.” They don’t know it yet, but I am so their girl!

TrunkSpace: What would you say is the greatest strength an actor/actress can have outside of acting ability itself?
Omilon: I would say the greatest strength an actor can have, outside of acting itself, is… that’s hard. There’s too many things that come to mind, I need to think of one. I’d like to say, the gift of remembering there’s more to life than acting, because this business does its best to tear you down and make you feel like you’re not worth it just because a target demographic doesn’t give you approval ratings or something. But even more than that, I would say being kind and positive. When I think of the actors I love, they’re not the ones who are always politically involved, or the ones that have big box office hits, they’re the ones who just are genuinely nice people. I believe Ashton Kutcher is the celebrity who said all you need to be in life is kind, and a hard worker. That’s how my parents raised me and I believe that’s true. If you’re not kind and a hard worker, it doesn’t matter how strong your acting is.

TrunkSpace: What is your ultimate dream when it comes to your acting career? Where would you like your path to lead?
Omilon: I want to win Emmys and Oscars. Acting is definitely not about awards for me, it’s about waking up and not hating my job. BUT… like I said, I am a school nerd. I went viciously after academic awards, so acting awards are a similar concept for me. I want recognition for my work. I want Emmys and Oscars for Acting AND Writing. I also really want an Oscar for Best Director and Best Original Screenplay, on the same film. So many professors I had told me “you can’t direct and write”, but I believe Hollywood begs to differ. So that’s another goal too.

Truly, I just want my path to lead to a place where I don’t have to work five side jobs to pay my rent and student loans. I just want to be able to act and only act, and that be enough. I’m not in this for the money (although it’d be nice because my student loans are ridiculous – I may need to go somewhere like https://www.sofi.com/private-student-loans/graduate-loans/ to help myself through them), I’m in it because I do not want to spend the rest of my life wondering “what if I had pursued it.” I want to live my life, pursuing it. 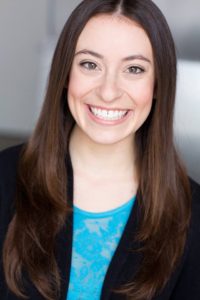 I will reach all those goals, there’s never been any doubt in my mind about that. Might not be soon, but it will happen. I refuse to live by any other mindset. It’s “not if, but when.” My high school technical theater teacher said that to me about my future when I graduated and I’ll never forget.

TrunkSpace: What advice would you give another young aspiring actor/actress who is considering moving away from home to pursue their dream?
Omilon: Do it! Totally do it! I always think you should make sure you really want something before you do it, but I’m a logical thinker so I can figure that out quick by trying it for a short period. But some people struggle because they need to do it long term before their decision. Or sometimes fear sets in. So I say just DO IT. BUT…don’t be afraid to move back home or to change your dream. This lifestyle isn’t for everyone and you should never feel trapped to admit that to yourself or others.

TrunkSpace: Where can people (and casting directors) learn more about you?
Omilon: Yay! I ‘d love to hear from people. Here are the best ways:
Website: www.ginaomilon.com
Facebook Fan Page: www.facebook.com/ginaomilonofficial
Instagram: @ginaomilon