TrunkSpace: Was there a particular performance or actor/actress from your childhood that you remember being drawn to and inspired by?
Severin: Oh loads. I could tell you one of the first movies I remember seeing in theaters was “The Lord of the Rings” and Aragorn was such a bad ass that I wanted to be just like him. I could also tell you that I would listen to the “Moulin Rouge!” soundtrack on replay as a kid and imagine myself singing and dancing with the cast in one epic love story. Or that “Sweet Home Alabama” was one of my favorite comedies growing up because it reminded me so much of the town I lived in. I could give you a list of actresses that shaped how I want my career to look: Nicole Kidman, Reese Witherspoon, Zoe Saldana, Cate Blanchett, Sandra Bullock, among many, many others. My inspiration as a kid was endless.

TrunkSpace: How did you decide to approach your career as an actor? Did you formulate a plan of how you wanted to attack what is known for being a hard industry to crack?
Severin: I honestly just started seriously pursuing acting a few months ago, so I am still working on the day-to-day. As far as approaching my career, when I first decided to move I made a five year plan on where I should be in how much time. So far everything is on schedule.

TrunkSpace: Was that move an easy transition for you initially? How long did it take you to feel at home and find a good 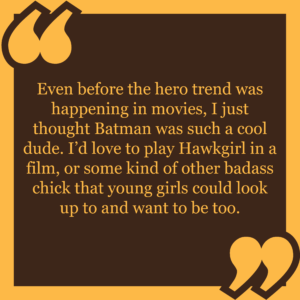 support group of friends and peers?
Severin: Moving to California was the easiest transition I’ve ever made in my life. I think it was because I wanted it for so long or maybe because I moved here with my best friend from college, but I didn’t feel the isolation and loneliness most people initially feel when they move here. As far as a support group and friends, I moved here with my best friend so we had each other in those first months after moving. A couple of months later I got a job and found more support with the people I met there.

TrunkSpace: What has been been your biggest break in terms of a particular role or project thus far?
Severin: I actually wouldn’t say I’ve had my “big break” yet as far as projects are concerned. If anything my “big break” this year was just being able to own an audition without nerves, and transfer my confidence into landing roles. Like I said, I’ve only been seriously pursuing acting for a couple of months, but I have landed a few shorts from that and I will be in a show premiering on Amazon next year, so that’s all very exciting.

TrunkSpace: Is there a specific type of role you’d like to take on or a specific genre that you feel more at home in?
Severin: For genre, I have always loved drama. When I was younger, I would recite dramatic monologues in the mirror and practice crying on command. For me, my favorite part about those moments in film is that it really moves me and makes me feel human. If a scene can make me cry, then it’s a damn good performance, and that’s what I’d like to be able to portray on screen one day.

As far as roles go, I have always wanted to play a superhero. Even before the hero trend was happening in movies, I just thought Batman was such a cool dude. I’d love to play Hawkgirl in a film, or some kind of other badass chick that young girls could look up to and want to be too.

TrunkSpace: What is your ultimate dream when it comes to your acting career? Where would you like your path to lead?
Severin: My ultimate dream as far as my career is to move and inspire people with the projects I take on as an actress. To me that also translates into winning an Oscar, but I also have smaller goals too like just being in attendance at the Oscars, hosting SNL, or playing lip sync with Jimmy Fallon. I also think it’d be great to use a successful career as a platform to bring other important topics to light, but that’s way in the future from now. Needless to say, big goals. Big, BIG goals.

TrunkSpace: What advice would you give another young aspiring actor/actress who are considering moving away from home to pursue their dream?
Severin: Failure is not an option and there is no plan B. It’s a tough mindset, but that’s my best advice. Of course there are always good and bad days in this industry, but instead of focusing on the bad, just look back and see how far you’ve come from day one. Be competitive, work hard, and put yourself in a winner’s mindset. If you look at your journey that way, then you realize that every “no” or rejection is not a failure, it’s actually just a chance to grow and be better than you were when you started.

TrunkSpace: Where can people (and casting directors) learn more about you?
Severin: You can find all my professional contact info on my IMDb page! Or just follow me on Instagram.