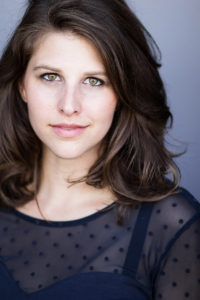 TrunkSpace: When did you know that you wanted to act for a living?
Schuberth: You know, the first time I can remember telling someone I was going to be an actress was my sophomore high school biology instructor. She was asking me what science class I wanted to take next, and I told her that I wouldn’t need to take anymore as I was going to be an actress. If I only knew that I would go on to major in both Biology and Theatre in just two short years! (Laughter) I did always love to perform though and was involved in all the talent shows and plays in school and church.

TrunkSpace: Was there a particular performance or actor/actress from your childhood that you remember being drawn to and inspired by?
Schuberth: Honestly, I have two moments that I distinctly remember inspiring me towards a career in acting. The first was watching my sister, Lauren Schuberth, in a community theater show when I was five. It was the first time I had seen live theater, and I’ll never forget how this enchanted world of knights, princesses, and castles came to life right in front of me. I was hooked. The second, was watching a movie called “A Walk To Remember” at the age of 12. I was so moved by Mandy Moore’s performance that I knew I wanted to also inspire people the way she inspired me in that film. To inspire, encourage, make people have emotion and really feel life, that was thrilling to me. I 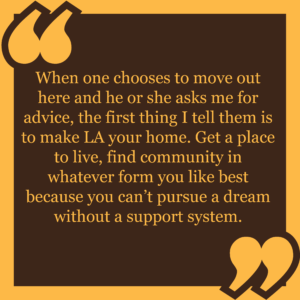 knew through acting I would have the opportunity to help people, and that still gets me so excited!

TrunkSpace: How did you decide to approach your career as an actor? Did you formulate a plan of how you wanted to attack what is known for being a hard industry to crack?
Schuberth: In my mind, as a 16 year old, growing up in the heartland of the US, my plan was to go to college, get a degree in Theatre, and then move to New York or Los Angeles. I didn’t know what it actually took to approach this kind of career. As I studied at Greenville College (University) in IL, I found out they had a study “domestically” abroad program called the LA Film Studies Center in Los Angeles. So, I quickly signed up for that to get to LA to see if I even liked on-camera acting, or maybe God would show me another route he wanted for my life. This program was fundamental in teaching me about living in LA as an artist. It solidified that LA was the place for me!

TrunkSpace: When did you decide to move away from your home and pursue acting as a career? How old were you at the time?
Schuberth: After attending the LAFSC program in LA, I knew that I was going to move back, but I had one semester left of school, so I returned to finish. Once graduated, I saved enough money in one month to get me to LA, so in July of 2012, at the age of 22, I made the big move. It was a scary and thrilling time in life.

TrunkSpace: Was that move an easy transition for you initially? How long did it take you to feel at home and find a good support group of friends and peers?
Schuberth: The transition for me was pretty smooth as I had just gone to school in LA and formed friendships and now had a network of people from that program to connect to as well. I also moved back out with a friend I had made through that program, so I was already living with a close friend. I also found a church community quickly after moving to LA, which was so helpful in making LA feel like home. I’m so grateful as I know many people come out without knowing anyone. Joining acting classes right away also gave me another network of people to connect with. When one chooses to move out here and he or she asks me for advice, the first thing I tell them is to make LA your home. Get a place to live, find community in whatever form you like best because you can’t pursue a dream without a support system. LA can be a very lonely place, but if you put yourself out there and start joining sports teams, acting classes, church groups, whatever that might be for you, it makes the pursuit that much better and more fulfilling.

TrunkSpace: What has been been your biggest break in terms of a particular role or project thus far?
Schuberth: My biggest break was in 2017 when I booked my first TV co-star for the online platform YouTube Red. The show is called “Rhett & Link’s Buddy System.” Season 2. I played a fun, hipster barista! It was an incredible experience to work alongside the YouTube titans Rhett & Link, known for their show “Good Mythical Morning,” as well as the director, Steve Pink, who has directed comedies like “Hot Tub Time Machine.” I couldn’t be more excited to see what happens next! 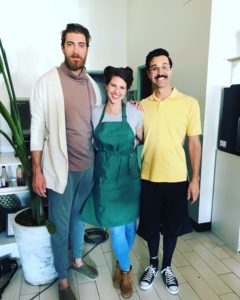 TrunkSpace: Is there a specific type of role you’d like to take on or a specific genre that you feel more at home in?
Schuberth: Yes, actually I was just offered a role in the Shakespeare play “Romeo & Juliet!” I’ve always wanted to do a full Shakespeare play, so I couldn’t be more thrilled! Ovation Arts is taking a modern twist with the show and having me play the male role of Tybalt!

Along with period pieces, I also want to work on romantic comedies, musicals, and dramas that deal with family dynamics. These are all among the genres I’d love to play both on screen and on Broadway! Ideally, I’d love to look back and see my career be shaped in both the stage and camera worlds.

TrunkSpace: What would you say is the greatest strength an actor/actress can have outside of acting ability itself?
Schuberth: Perseverance. This job is all about moving forward no matter the setbacks or “nos.” The people who don’t give up are usually the ones you see 20 years down the line with a career and a powerful story.

TrunkSpace: What is your ultimate dream when it comes to your acting career? Where would you like your path to lead?
Schuberth: The biggest dream I have when it comes to my acting career is that I might have a voice to create change in the world. I want people to know they have value, they are loved, and we all bring something unique to the table. If I can even make one person feel seen and worthy, then my career in acting has been worth it. I know God has created me to bring light and hope to those around me.

TrunkSpace: What advice would you give another young aspiring actor/actress who is considering moving away from home to pursue their dream?
Schuberth: I would say, if there is nothing else you can even consider doing, then come. Join the tribe, be ready to be challenged, to never give up chasing what you want, to live a journey that is only yours. It isn’t an easy one, but if you have the passion, it will be worth it.

TrunkSpace: Where can people (and casting directors) learn more about you?