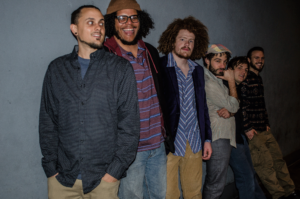 TrunkSpace: How would you describe your music?
NBL: We did an acoustic performance on Asheville FM’s Open Door Radio Show hosted by Davaion Bristol and they coined us the term Gumbo Funk. From there we’ve gone a little further to call it Soul-Punk-Gumbo-Funk, or Hip-Hop-Cosmic-Slop, but honestly we embrace sounds from many musical genres with an overtly Hip Hop overtone. Who knows, maybe someday we’ll have our very own genre.

TrunkSpace: A six person band is a lot of different points of view to digest in order to create what will become singular songs with ultimately one point of view behind the wheel. How do you manage that creatively in terms of putting everybody’s thoughts together democratically?
NBL: We usually take into account that we will each have many different thoughts going in many different directions, so we are never married to any one specific way of making the songs. The songs naturally progress and constantly evolve whether it be through practice, “jams”, or through live performance. Some songs take a week to write and others simmer on the skillet for a month or so. And we vote. A lot.

TrunkSpace: You’re not only infusing a bunch of different points of view, but also, a bunch of different genres of music. How do you marry all of those different styles into one cohesive sound?
NBL: It comes from the gut… never the brain. Since mostly everything new starts with a jam we usually take it as it comes. We all listen and play multiple styles and genres of music, but groove well on a personal level and we like to think it reflects in our music. We never set out to write a song with a specific genre in mind. Everything comes as natural as possible.

TrunkSpace: How did the band first form and what was the journey to get it to where it is today, both in the sound and the make up?
NBL: Mike and James had been playing together for about a year, and slightly over a year ago Austin’s previous project took an indefinite hiatus and we joined forces and started piecing together this project. Our original goal was to make something different than any of our previous projects. Joining next was the saxy sax man, Ben (James housemate), who added a little jazz to the equation. Then Kevin met us at random the night after our original drummer quit. Couldn’t have timed it better. Last, we had played a couple shows with Rex’s previous band and he was an absolute monster on the strings. After tons of begging him to join he finally caved. In our current and most final form we’ve been together since September of 2016.

TrunkSpace: Who is responsible for the lyrics of Natural Born Leaders songs and how important is it for you that your songs are saying something, whether it’s politically or socially, about the current climate of the country/world?
NBL: Respectively whoever is rapping or singing usually writes their own lyrics. Our two front men both have different perspectives of the world and how to approach the public with their thoughts and ideas. Sometimes even opposite ends of the spectrum ideas will find their ways into single songs. They are both revolutionaries and activists in their own rights. They wouldn’t necessarily go as far to say that they are “conscious,” that in itself kind of limits the band’s public perception and our content. They do try to bring a lot of those “conscious” thoughts and ideas to the table and maybe even push the boundaries of what that even means. However, we all do think it’s necessary in today’s world to speak out against the many injustices being carried out by and against our people nationally and worldwide. Not everyone has a voice and if we have the platform and microphone to project ours, we will do our absolute best to use it.

TrunkSpace: The band’s music is funky and brings people to their feet to dance, but how important is it to you that they’re looking beyond that instant reaction and finding those messages beneath? Or, is it a matter of music being different things to different people and taking from it what works for you?
NBL: The message is extremely important, but as you said, everyone interprets the sound differently. We can lead a man or woman to water but we can’t show them how to figure out what it all means. Same with the music. We’d hope you’d dig deeper, but at the end of the day, we can’t fault anyone for just wanting to dance. Sometimes we just want to dance too.

TrunkSpace: The country is so divided right now over so many different issues. Is it a fear that, as an artist, if you speak out one way or another, you’re instantly alienating what could be a portion of your future listeners?
Martinez: Different strokes for different folks. I write things that make me happy and for every one person who doesn’t like it I’m positive there’s another one who does. “For every action there is 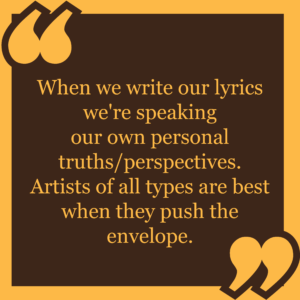 an equal and opposite reaction.”
Haynes: For me, rather than think about who I may be alienating, I think about who I’m attracting with my lyrics/delivery. In a way I’m shaping my environment and creating my reality. All music isn’t for everyone and sometimes music grows on you based on where you’re at in your life. I think artists who don’t make pop music would be lying to themselves to think that everyone would like them. When we write our lyrics we’re speaking our own personal truths/perspectives. Artists of all types are best when they push the envelope. This doesn’t always make people happy (at first), but it takes art to new heights and keeps the art progressively moving forward.

TrunkSpace: Music has long been a platform for people to discuss the issues of the day, and in many ways, reflect them to audiences who may not be paying attention to the news or other outlets where those issues are being covered. Many people have suggested that a musical revolution is happening right now where more and more artists are saying more than they have before. What are your thoughts on this as a whole, particularly from the point of view as artists yourselves?
Haynes: I think that’s a very valid observation and I personally agree that musicians are becoming less afraid to discuss current issues. You can see it in Hollywood as well, as more and more actors and actresses speak out on political and social matters. I would even go as far as to say that there is a collective rising of consciousness happening around the globe in general right now. And I think it’s an inevitable effect of the power of the internet/technology and a sign of the times when you consider how fast information spreads in general now.

TrunkSpace: In your opinion, what can music accomplish and provide for the end user (listener) that other entertainment mediums/platforms cannot?
Haynes: Live music especially can provide a sense of interconnectedness. When you see artists/musicians live, who are masters of their craft, you can usually witness a strong sense of community within their fan base. I think this is because live music has the ability to touch all of people’s senses at once; from listening to the music, to watching the music being played, to feeling the bass notes resonate through your body, to smelling the collective environment around you and tasting the various treats of the collective. Music not only brings people together but also creates the sense of community for fans to feel at home amongst one another.

TrunkSpace: What can fans expect from Natural Born Leaders in 2017?
NBL: This year you can definitely expect an album, many collaborations, and lots of travel! We’ll be seeing y’all!