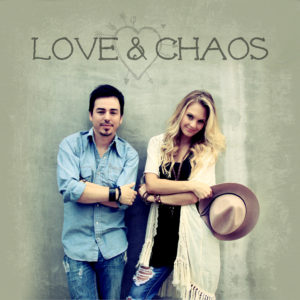 TrunkSpace: How would you describe your music?
Beard: Rock/roots Americana

TrunkSpace: How does the songwriter aspect of what you do work in terms of the mathematics of it? In that we mean, you’re a duo who shares vocals and musical duties… do you also share the songwriting, both musically and in the lyrics?
Vallejo: It varies from song to song. Sometimes Kendall will come up w/ a cool song concept & other times I will. Most of the time lately we’ve been more effective writing in the studio together bouncing ideas off of each other and come with something really strong. Our standards for what we’re looking for in a Love & Chaos song seems to constantly progress so we’re always pushing each other harder when we write.

TrunkSpace: In a band atmosphere there tends to be a democracy where everything is put to a vote. How do big decisions, creatively and professionally, work in a duo where two different opinions essentially wash each other out?
Vallejo: We’ve been working together so long & have such a similar vision of where things go musically with this project, so we usually communicate pretty thoroughly about whatever subject/issue comes up. We’ve butted heads a couple times ha, but so far the work process we have works well.
Beard: We’re constantly pushing each other not to settle for something that is just “Okay”. When you are writing alone, often it’s easy to settle for lyrics that are good. We push each other not to settle. Two heads are better than one and we work to make our songs the best they can be.

TrunkSpace: How did you two come together musically?
Beard: A mutual friend introduced us and AJ ended up producing my ‘All Around Girl’ album, then played guitar in my live band. We started pretty much working together around the clock musically. As far as our sound, it’s probably a combination of singing together for so many years, as well as our natural tone that we have together, that make our sound and harmonies uniquely blend.

TrunkSpace: We’ve heard that you two are very prolific together when it comes to songwriting. Is it true that you wrote 17 songs together in the span of two months? 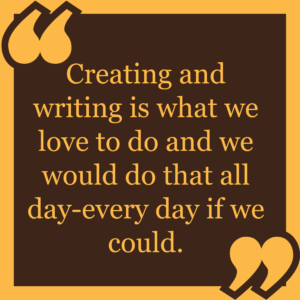 Vallejo: Ha, yeah, a label buddy of ours saw us perform at a venue one night separately. We ended the night duetting on a handful of songs. After the show he was like “Your acts are both great, but something magical happens when you two sing together & perform onstage, you two should maybe capitalize on that..” We were both like “Does that mean he thinks we suck separately??” haha! We came back from the holidays that year and started cranking out all kinds of songs together in my studio. I suppose he was right. We’re somewhere around up to 50 songs at the moment.

TrunkSpace: Does that breakneck pace you achieved in that span put pressure on you two to do that every time you sit down to write now?
Beard: Yes and no. We’re artists. Creating and writing is what we love to do and we would do that all day-every day if we could. We actually often have to stop ourselves and take a step back and say, “Okay, we need to work on the business side of our music. Or, we really need to go back in the studio and perfect some of our songs before we move onto the next.” Id say the hardest part is trying to keep all sides of our music, performing, and artistry moving forward simultaneously. We’re always working towards that perfect balance.

TrunkSpace: Your lyrics are poignant and relatable, often times in a way that seem to transcend any particular demographic of your listening audience. How important is it to you that your music is as inclusive and relatable to as many people as possible, and in addition to that, do you ever scrap a song because it may be too narrowly focused?
Vallejo: Hmmm..that’s a good question. We pretty much write about our personal life experiences, some brutally honest, others more tongue-in-cheek. I think that, in itself, is very relatable to our listeners. We want them to hear a song and maybe relate to it personally or think of someone they know that it reminds them of. We’re hoping it’s thought-provoking enough so that maybe emotionally they get something out of the song. As far as a reason for scrapping anything, if we think it sucks, we scrap it! haha

TrunkSpace: Do you ever think about turning your songs over to other artists and writing in that sort of classic Nashville songwriter role
Vallejo: Yeah, we talk about it a lot, and would definitely entertain it, we’re just focusing right now on writing better songs and getting our live show as strong as possible. Austin is a very competitive city. If you wanna stand out here, you really have to be firing on all cylinders to make a splash here.

TrunkSpace: For Kendall, how much of your experience on “American Idol” has played into how you’ve approached your musical career since?
Beard: “American Idol” was a great platform for me at the time to get my musical career off the ground. However, the show was on for so many seasons that most people don’t really even remember who was on what season and when. I think it gave me a little bit of leverage and a solid national following for about a year or so, but after that, it was all up to me to keep building my fan base and music. It was a great experience but there have been so many music reality shows that I think people have grown a bit numb to them.

TrunkSpace: Has their been a conscious attempt to distance yourself from the show and build your music career on the music itself as opposed to the attention the show brought?
Beard: The first year after the show was the most challenging as far as getting people to accept me for the type of artist I really was, versus the artist they made me out to be on the show. I was really branded as the “young bubblegum country singer from Texas.” Not that that was a bad thing, but it wasn’t really who I was. There was a lot more depth to me as an artist and a person and that’s what I really struggled with trying to make people see. Like I said before, music shows are a dime a dozen now, so I felt over time, the association faded on its own.

TrunkSpace: For AJ, what was it like to go from guitarist to the more front and center role you’re in now as part of Love & Chaos? Was being more of a front man something you preferred and or anticipated in terms of your musical path?
Vallejo: I’ve actually been performing as a front man/guitarist for my band w/ my brothers, Vallejo for many years now. If anything, sharing the center role w/ someone else is actually new to me, but very challenging because balance is important in a successful duo. We definitely have a competitive attitude on lighting up the stage when we perform but it never feels to me like one is trying to upstage the other. I don’t know, ha, we just get up there and do our thing. Working together for close to a decade now has almost become second nature. We both have the same agenda for what we need to do with this project.

TrunkSpace: What can fans expect from Love & Chaos in 2017?
Beard: A lot of new music, more live shows, and of course more love and more chaos!