TrunkSpace: How would you describe your music?
Kulululu: It’s kind of a mess. Quite frantic. Beautiful sometimes, but mostly frantic. It has rough edges, like the hole in the toe of your shoe, or the tear in the back pocket of your jeans. The stuff that you love even though it’s beat up. It’s very smiley.

TrunkSpace: We love the visual element you bring to your music, particularly with your album art. How important is that visual branding to what Kulululu is doing with its music?
Kulululu: It’s a natural extension of the project. It’s not so much a brand as a way of thinking, or a style of creation. There have been numerous contributors to our visual aesthetic. Most notably a Portland artist who goes by Hasmood, and a Tucson Arizona artist named Noah Nixon. Both artists have made significant contributions to our visual aesthetic and our general well being. The community that surrounds the project and the contributions that are made are all very important.

TrunkSpace: Sticking with the visual element… your videos, particularly “#14,” kind of freaked us out a bit. Tell us about how you marry those visuals with particular tracks and what the goal is when doing so?
Kulululu: Ah yes, success! Most often our goal is to have fun creating. A lot of the ideas surrounding the project are spontaneous and very intuitive. We don’t spend a lot of time making plans and thinking hard about how to put on costumes and have fun. There’s a lot of improvisation and a lot of accepting the unexpected outcome.

TrunkSpace: We saw that the band recently played a gig with Gold Casio, a former TrunkSpace alumni. That is a band that also focuses on the visual elements of the art it is creating. Is it more important for a band to align itself with other artists who have a similar mindset or with those who have a similar sound?
Kulululu: Gold Casio is a great band! I can’t keep my body still when they play.

Sound doesn’t matter. I think the most important thing is that you align yourself with other artists who you believe in and trust. People you know stand for good, and make art that you appreciate.

TrunkSpace: The band is planning to embark on a tour of the west coast this July and has reached out to fans to help it all come together. How much does the band look forward to hitting the road and putting miles 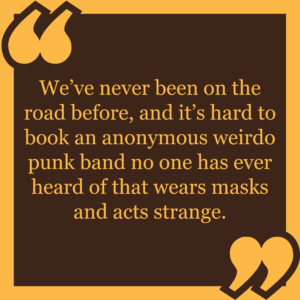 under its collective belt?
Kulululu: There’s excitement! But mostly we just need all the help we can get to make it happen. We’ve never been on the road before, and it’s hard to book an anonymous weirdo punk band no one has ever heard of that wears masks and acts strange. If we can’t book the tour we’re just going to go camping and crash open mics. We’ll pay for gas by busking.

TrunkSpace: The band isn’t afraid to make its political leanings known, recently raising money for Planned Parenthood. In a time when everyone in the country seems so divided, do you worry about losing fans (or fans-to-be) if they don’t agree with your point of view?
Kulululu: It’s important for people to know what we believe. If they don’t like it that’s fine. Worried about fans? No. Worried about the country? The Earth? Our kids? The future? Hell yeah!

TrunkSpace: In your opinion, how important is it for artists to say something with their music, even if the messages being delivered aren’t obvious ones?
Kulululu: It’s up to the artist. Some of my favorite art is meaningless. But on the other hand, if you’re not trying to say something, or make people feel something, why are you writing music? That being said I think it’s crucial that artists recognize the opportunities they have to speak out against injustice. It’s not always the time or the place, but right now, with everything that’s happening across the world, our communities are being divided and performers especially have regular opportunities to speak up for what they believe and to offer a supportive voice to others who share their concern.

TrunkSpace: A lot of times music can be perceived in a much different way than the songwriter intended. On the other side of that coin, songs can sometimes take on a different meaning to the songwriters themselves. Has something Kulululu created taken on a different meaning for you now as opposed to when you first created it?
Kulululu: My relationship to my music is constantly shifting. It’s ever changing. I do have a specific song titled “Freak Out” that was originally written about someone freaking me out. But now the song feels like us freaking out the listeners, in a really fun loving kind of way.

TrunkSpace: As far as marketing the band is concerned, what is the best way you have found in terms of getting your music and name out there into the world and to attract new fans?
Kulululu: We play a lot of shows and make a lot of art that we share often. It’s a lot of work. But it’s fun and therapeutic.

TrunkSpace: When you look towards the future of music, are you optimistic that new generations will continue to find their own unique voices in a world where the mainstream offerings get more and more streamlined and similar?
Kulululu: I’m sure that young people will find their own unique voices. The question is will we be able to find those young people?!? As the world gets more complex, so does the world of music. I am regularly astounded by the creativity of human beings and I have no doubt that it will remain ubiquitous amongst artists. I imagine music making will continue to become easier through the aid of technology. My fear is that people will forget how to appreciate the time and dedication that it takes to build the skills necessary to make great music.

TrunkSpace: What can fans expect from Kulululu for the rest of 2017?
Kulululu: We will soon be releasing a slew of media on the internet. We will be putting out an album along with a music video, and a series of live sessions filmed and recorded in Portland Oregon by Banana Stand Media. Maybe a children’s book.

Mostly you can expect us to keep writing exploratory art rock, having way too much fun, and attempting to travel the world in the name of all that is great and wonderful!