Very few people with aspirations of Hollywood greatness end up booking a starring role on a major television series as their very first credit. Even fewer people do it on a series that is produced and directed by a legend in the business. Angela Ko did just that, serendipitously landing the part of Cheena Lin in John Singleton’s “Rebel” for BET.

We recently sat down with Ko to discuss how the series came into her life, how Singleton fought to cast her in the role, and why Cheena is an extension of Angela.

TrunkSpace: “Rebel” is your first major TV or film gig, which seams like a really big and bold way to jump start your career?
Ko: Absolutely! Yes it is the first thing and it’s a blessing. It’s crazy! (Laughter)

TrunkSpace: Have you seen it directly influence your career in other areas thus far?
Ko: Absolutely. I would say that my whole life changed. Literally last year this time, I had absolutely no idea about “Rebel.” No idea at all. I was still just praying for it, thinking about it, and from here I’ve come across being able to do things like this, interviews, going to events and just meeting different people and talking about collaborating and making my own content with other producers, writers, and directors. So yeah, absolutely… it has completely changed.

TrunkSpace: What was the experience of learning that you had landed the part like and what went through your head when you found out?
Ko: Oh my goodness! First of all, the whole journey of getting it is a completely unique story. I’ll give you the long short version. This Saturday will mark a year of me going to a Natasha Ward casting workshop in which I put up a piece and she mentioned “Rebel” to me and said to put myself on tape. They had already done the casting and callback process but something in her sparked her to say, “Put yourself on tape. You got that energy.” So I put myself on tape, sent it in by that following Monday and didn’t hear anything back. I forwarded it to my mentor for reviewing and the next day I get call from Kim Hardin and my mentor that I was going to chemistry read in front of John Singleton. And I was like, “WHAT?!?!” I had never done anything like that before. I was absolutely blown away, but I knew I was prepared. Flash forward, I did the chemistry read and it went amazing. That was a Thursday. On Saturday I get a call, including from John himself, saying I got the part and my mind was blown. Instantly, within that second, I was in tears.

TrunkSpace: So had you not taken that workshop, the show never would have found its way into your life?
Ko: Absolutely. It gets even funnier. It’s divine timing. It’s about making a choice and moving forward in that choice, even if it doesn’t seem a part of the plan. I tell you, I was moving to New York when I was coming to LA to take the workshop.

TrunkSpace: What’s so awesome is that you can hear the excitement in your voice about being involved in “Rebel.” So often it feels like people are promoting projects just because it’s a part of their contract, but you genuinely seem to love your place in it.
Ko: Yeah. I loved it! I’m blessed. We just had the season finale two days ago and it was bittersweet. We had the viewing at a theater and it literally hit me then because it happened so fast. Everything was new to me. This was my first thing ever. First time shooting a pilot. First time shooting a series. First time being out in LA by myself. It was just a lot of firsts and it happened kind of fast and you have to just kind of pick up and do it. You have to be professional and go to a super higher power version of yourself. Towards the end I started enjoying it a little bit more. During that finale, I had a friend who has been with me since the get go of when I took a turn and started pursuing this and training hard at it, and he was next to me and had been through the process and I was like, “Oh my God, my head is going to be so big on the screen!” (Laughter) I’m funny like that. And then the next sentence was, “Oh my God, this is the first time I’ve ever seen myself on the big screen.” I just started getting flashes in my head of my mom and I going to the movie theater and of just literally, a week ago, going to the movie theaters. It was like, “This is real!” I just got emotional. It’s incredible.

TrunkSpace: You mentioned going through a lot of the firsts on “Rebel,” but as you look back over your time on the series, what was the highlight for you in terms of the acting itself that, if you 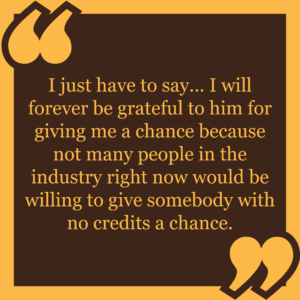 were putting together a new reel right now, you’d splice in there?
Ko: Oh, man! You know what’s funny, I’ve been thinking about that recently because I’m like, “I’m going to have to add this to my reel.” It’s hard to just kind of be objective.

I think Cheena had a moment with Rebel in episode four where her and Rebel kind of had a moment where she just said, “Take me seriously.” That’s kind of something, but I also see a different side of her. Cheena is really the comic relief and I definitely want to show aspects of that and I think that was shown quite well in the pilot. There was a moment with Mykelti and I, Rene and Cheena, at the table where it’s kind of that first thing and snapping back. That would be one.

The other one would be the scene with Cheena and TJ (Method Man) where she is kind of protecting Rebel and she’s like, “Back up!” I think it shows a different layer of her that is a little tougher. It’s like, “Whoaaa… Cheena can snap back too!”

I think those would be my top three to choose from.

TrunkSpace: Most actors are also fans of the industry itself, so we’d imagine that being directed by John Singleton, particularly as one of your first jobs, must have been pretty exciting?
Ko: Oh my goodness! It was! He is so supportive and he is all about authenticity and bringing the real voice. Initially Cheena was Chinese but he learned that I was Taiwanese and Philppina and he was like, “Well, Cheena is Taiwanese then!”

I’ve trained. I’ve been in the arts for a long time. I’ve always had a passion for it. But, as far as being on camera, God, I was on stage. Being on camera is a whole different beast. I’ve been told growing up that, “Oh, you’re funny!” and I’m, “I’m not funny. I’m not trying to be funny.” I always took it offensively. And he, kind of throughout the process, just basically told me what I don’t even know about myself. He was like, “You have an innate comedic timing. Really nurture that. You take it offensively when people are laughing, but they’re not laughing at you. You’re funny.”

And what an honor to be getting a phone call or a text from John Singleton that says to watch Woody Allen movies or to watch the Marlon Brando documentary. That process is incredible. And he let us play. We really just… we had fun. We had fun! And a lot of time times, he let us do some improv. Like the scene in the pilot, the dinner scene with Mykelti, Danielle and I… my goodness! Mykelti is just a brilliant actor. But, he (Singleton) would put the camera in front of me and he’d be like, “Just react!” To feel special as an actor… to feel comfortable and to feel like you’re able to play that… it’s the best thing ever.

And away from that, I just have to say… I will forever be grateful to him for giving me a chance because not many people in the industry right now would be willing to give somebody with no credits a chance. We just all feel so incredibly blessed that we had somebody like John Singleton willing to take a chance and not give a crap about status quo.

TrunkSpace: Well, and that’s something he has been doing his entire career, all the way back to “Boyz n the Hood.”
Ko: His whole career! And he’s confident about it. He gives people a chance and he believes in people, especially musicians and artists. At the end of the day, he believes in telling an authentic story from people who came from those kinds of backgrounds who fit the character. That’s it. It’s about telling an authentic story and I respect him for that because trust me, they definitely say, “Oh, we want a name for this!” And he’s like, “No! Danielle is Rebel. Angela Ko is Cheena.”

TrunkSpace: That must give you all of the confidence in the world to go in on your first day and own Cheena.
Ko: You know, yes and no. (Laughter) I’m still an actor and an artist and it was my first thing! So honestly, even throughout when I got the script, I read it and I was like, “Holy crap, this is me!” Your first thought is to overthink it. I thank God that I have a great support system because my friends are like, “Ko, this is so close to home for you. Just be you! Be the best you that you can be!” Do you know how hard that is? You go in to be an actor to be everybody else, so it’s actually a little more difficult, at least for myself, to give as much of me and accept all of me and bring all of MY self all to the table. So yeah, there’s a level of confidence, but there’s so much work to be done to get yourself prepared to relax and to just be you and to show the flavor and to show the sass.