For actress Lisa Marie DiGiacinto, who stepped into DC’s Legends of Tomorrow during its 5th season as Ali, the love interest of Mick (Dominic Purcell), sometimes waiting for the perfect part means missing out on some of those that weren’t meant to be.

“I think the most important thing I’ve taken from this is that the right role will be there waiting for you, and only you… when the time is right,” she said in an exclusive interview with TrunkSpace. “All the other ones that you thought were the ‘right one’ were just someone else’s ‘right one’!”

We recently sat down with DiGiacinto to discuss her Legends-ary welcoming, tapping into such a big fan base, and what it means for Vancouver to say goodbye to Supernatural.

TrunkSpace: What has been the most legendary part of your Legends of Tomorrow journey thus far?
DiGiacinto: I love the cast and crew! Everyone is so great at their jobs, always happy and welcoming on set and extremely well organized. I felt right at home every time I walked onto the set, even though I didn’t come in until the 5th season. I’m so grateful to work with such an amazing team. I couldn’t have dreamed up a better role or team or show! Also, I absolutely love that there’s time travel involved, it makes for so much more creativity for everyone involved, from acting in different eras and genres, to wardrobe, hair and makeup, the writers, directors, editors! Pretty hard to get bored when you get to do something new very episode.

TrunkSpace: When you’re stepping onto a set for the first time that already has established tone and way of doing things, how do you find your sea legs, especially when many of the people you’re acting alongside of have already built their rapport on camera and off?
DiGiacinto: I was extremely welcomed by everyone in the cast and crew; Dominic was such a pleasure to work with and I enjoyed improving with him – he’s hilarious. Tyron Carter, one of the series writers, welcomed me immediately and assured me that I was the only actress for the role, as well as the director, Alexandra LaRoche, who was so positive on set and excited about the chemistry between Dominic and I on screen. The whole cast in my scenes were all so easy to work with, very open, friendly and down to earth. It’s much easier to be authentic and do a great job when you have such a positive and supportive team.

Also… I spent the whole weekend before I was on set re-bingeing the first four seasons for prep.

TrunkSpace: How did you celebrate your debut on Legends of Tomorrow when it aired? Are you someone who can watch – and enjoy – your own work?
DiGiacinto: I had the chance to celebrate with family and friends with bottle of champagne. My friends and family are so supportive and happy for me. I’m very lucky. This is by far my favorite role, and I enjoyed celebrating with all my favorite people!

TrunkSpace: A show like Legends of Tomorrow has a vast catalog of characters who have journeyed in and out of the narrative over the 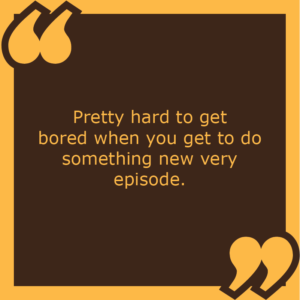 course of its five seasons. What is it like being a part of that sort of character yearbook, especially when it’s on a series with such a loyal fan base behind it?
DiGiacinto: It’s pretty surreal, actually! It still hasn’t even really hit me yet. I guess it’s a bit nerve racking and exciting at the same time.

TrunkSpace: For fans, the final product of a film or series is always the most memorable part, but for those involved in a project, we’d imagine it goes much deeper than that. For you, what is something about your time working on Legends of Tomorrow thus far that you’ll carry with you through the course of your life/career?
DiGiacinto: I think the most important thing I’ve taken from this is that the right role will be there waiting for you, and only you… when the time is right. All the other ones that you thought were the “right one” were just someone else’s “right one”! It makes this competitive industry a lot less daunting and the “rejection” doesn’t really feel like that to me anymore. It just reminds me that in life, everything happens for a reason.

TrunkSpace: You also appeared in an episode of Supernatural in Season 8. That show is now coming to an end. How important has that series been to the acting community of Vancouver over the course of its 15 seasons?
DiGiacinto: Wow. I’m pretty sure it’s the landmark of all shows filmed in Vancouver. It was actually the first larger principal role that I ever booked! I was so excited and very nervous to be on set with these huge stars. It was pretty intimidating, but I held my own. They were unbelievably nice! Also, I would say that about 80 percent of my colleagues have been on the show at least once. Many twice or more. Definitely helped us all pay the rent at some point. It also gave us such a wonderful opportunity to work on a show with such a huge fan base and production quality and value.

TrunkSpace: You’ve appeared in a number of series over the course of your career. Who is a character that you wished you had got to spend more time with and why?
DiGiacinto: This is such a tough question, I wanted more of all of them. When I only get one episode for my character, I always dream of ways to be written in again. 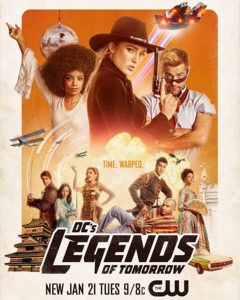 TrunkSpace: What do you love most about being on a set?
DiGiacinto: The magic that happens once the camera rolls, as well as the teamwork with the crew in between. Also, the camaraderie with the others while we’re waiting in the green room. Oh, and of course, there’s crafty… mmmm. I guess I like everything about being on set.

TrunkSpace: Where are you hardest on yourself as a performer and how do you overcome those self critical insecurities?
DiGiacinto: As a woman, it’s difficult not to compare yourself to all the gorgeous movie stars that you looked up to growing up. Also, I’m not a naturally skinny gal. I work out a ton and eat pretty healthy but I definitely have curves and build muscle easily. I actually wrote a short film called Bully, with the message that the biggest bully is the one in your head. I should shoot that, I actually forgot all about it as I started working on different projects.

TrunkSpace: Time machine question. If you could jump ahead 10 years and get a glimpse of what your career looks like a decade from now, would you take that journey? If not, why?
DiGiacinto: No way! As they say, “Life is about the journey, not the destination.” One of the best gifts this career has taught me. Also, to be present is such a gift, so how could I possibly live in the moment knowing exactly what happens in the future?!

DC’s Legends of Tomorrow airs Tuesday on The CW.