These are some weird, emotionally-draining times. For many of us, escaping into the fictional worlds of our favorite pop culture mainstays remains the only viable method of holding onto our sanity. One of our favorite binge-worthy broadcasts is Chilling Adventures of Sabrina, and just prior to lockdown, we spoke with series star Lucie Guest, who herself was a fan of the show before being cast as Circe.

“I think I couldn’t help but feel more invested in the character having watched the show and knowing the world that these characters live in already,” she said in the exclusive interview with TrunkSpace.

We recently sat down with Guest to discuss the positive vibes on set, walking on spoiler eggshells, and her career behind the camera.

TrunkSpace: We read that you were a fan of Chilling Adventures of Sabrina before being cast as Circe. When you’re working on a project that you have a personal stake in as a viewer, does it alter the experience for you at all?
Guest: Yes. I think so. I think I couldn’t help but feel more invested in the character having watched the show and knowing the world that these characters live in already. My character comes from a different world but she interacts with their world in such a fun way. I was a fan of the show and also a fan of the team behind it. Roberto is someone I think has a specific and detailed vision and I wanted to bring that same level of detail to the character.

TrunkSpace: The series has a massive following and the fans take to the socials pretty quickly when a new season drops. What is it like being on a show that has so much buzz surrounding it? Is it a bit infectious and does it carry over onto the set?
Guest: It’s exciting. The set is such a fun environment despite it being a dark show. The cast are beyond sweet and so fun to be around. It’s the best coven out there.

TrunkSpace: On the opposite side of the coin, when you’re on a show with so much buzz, everyone must want to know what’s going to happen next. Are you in a constant state of fear, worrying about accidentally revealing spoilers, because frankly, it would be too much pressure for us to carry around in life?! 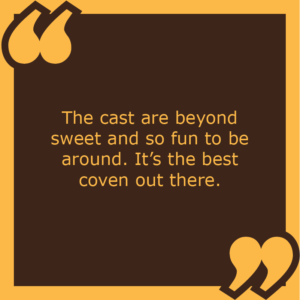 Guest: Ummm, Yes! I was so afraid to accidentally post anything that might spoil a new character or storyline or accidentally reveal someone dies… I almost posted a photo from the set and I zoomed in on the background and realized it would be a major plot spoiler!

TrunkSpace: For fans, the final product of a film or series is always the most memorable part, but for those involved in a project, we’d imagine it goes much deeper than that. For you, what is something about your time working on Chilling Adventures of Sabrina that you’ll carry with you through the course of your life/career?
Guest: I really loved the environment the cast created on the set of this show. I wish all shows were like this. I’ve talked about it before, but it’s so rare to be on a show where the cast is so welcoming and inviting. It makes such a big difference when you’re working on something and you look forward to going to work. It makes the long hours go by faster. I really think this has a lot to do with how amazing Kiernan is – she really sets the tone. All hail queen Kiki.

TrunkSpace: Can you tell us a little bit about Take Off to Love, which you co-wrote and will be directing?
Guest: It’s a feel good type of movie. It’s a romance about a girl who has to unexpectedly go back to her hometown to help her Aunt run her marina-side bed and breakfast and while she is there she starts to fall for the seaplane pilot who flew her over.

TrunkSpace: Does working behind the camera – writing and directing – fulfill a different part of your creative brain that acting can’t?
Guest: Yes. It is so nice to be a part of the creative process from the beginning to the end. I really feel like the years of acting experience has shaped my directing style.

TrunkSpace: Where are you hardest on yourself as a creative and how do you overcome those self-critical insecurities?
Guest: I think it’s part of the creative process to have a critical eye, but what helps is having a deadline. Sometimes, I need to just walk away from something because I could rewrite it or tweak the edit or do another take. For me, it’s hard to fully feel like the creative process is ever really “finished” so that’s when it’s good to have a deadline.

TrunkSpace: What has been the highlight of your career as a whole thus far?
Guest: I am most proud of a movie that I wrote and directed and acted in called Never Better – A Closure Comedy.

TrunkSpace: Time machine question. If you could jump ahead 10 years and get a glimpse of what your career looks like a decade from now, would you take that journey? If not, why?
Guest: Yes! The best is yet to come. Wink.

Chilling Adventures of Sabrina is available on Netflix for your binge-watching pleasure!