Although an urge to make people laugh has always been front and center for Sherry Cola, the comedian-turned-actress feels spoiled to have been able to venture into drama as one of the stars of the Freeform series Good Trouble. Not only has it been a career-changer for the multi-hyphenate, but being on set has helped to shape her future industry goals because she has been able to absorb the creative energy from the many talented actors and directors she has worked alongside of.

We recently sat down with Cola to discuss her character journey, social media synergy, and why you have to put in the hours to get better at stand-up comedy.

TrunkSpace: Chicken or the egg question. You wear a lot of hats in the entertainment industry, from actress to writer to comedian, but what was the springboard for sending you down this path? Which platform cemented your love for a creative career?
Cola: I LOVE HATS. Life’s too short for just one hat, ya know? I’d say my comedian side was the loudest from day one. In high school, I hosted talent shows and created funny videos in film club. Making people laugh has always been my #1 passion. From doing radio to doing stand-up, and everything in between, my sense of humor is old faithful.

TrunkSpace: You’ve spent nearly 30 episodes playing Alice on Good Trouble in the life of the series thus far. What is it like spending that much time with one character? At what point in the process do you start to feel like you know her as well as yourself? 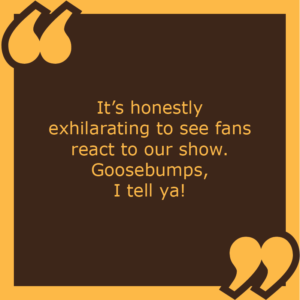 Cola: It’s been such a fun journey, portraying the adorable and apologetic Alice Kwan. I love discovering things about her, as if she’s a real person. In the beginning, I thought Sherry and Alice were practically synonymous – but the deeper I dug and the more I explored, I found new qualities in Alice that actually set us apart. It’s super cool being on a TV show and getting to spend so much time with a character. She’s a major part of me now. I can just turn Sherry off and turn Alice on. It comes so organically, to the point where I can actually improvise as Alice, in her sweet little nervous nature. It’s a treat.

TrunkSpace: In a day and age when viewers can not only react in real time, but interact in real time as well, what is it like being on a series that has such a big social media following? Is it odd to see how a particular storyline is perceived WHILE a show is airing for the first time?
Cola: Social media is a blessing and a curse, but I can’t get enough. I do enjoy tweeting with our dedicated viewers. It’s nice to be accessible and do an “ask me anything” online just to keep it spicy. A little goes a long way. It’s honestly exhilarating to see fans react to our show. Goosebumps, I tell ya!

TrunkSpace: Where has Good Trouble impacted your life the most? How has it altered your path?
Cola: I love that our show reflects on important social issues. We’re not afraid to speak up. Being on Good Trouble has opened my eyes more and more to Black Lives Matter, gentrification, trans rights, etc. On top of that, I’ve felt really empowered to represent my queer Asian community. It’s all about opening minds and starting conversations on how important it is to feel seen, and how a character like Alice has been invisible for years. I hope to continue making an impact in all of my work. These cheekbones won’t be ignored any longer!

TrunkSpace: For fans, the final product of a film or series is always the most memorable part, but for those involved in a project, we’d imagine it goes much deeper than that. For you, what is something about your time working on Good Trouble thus far that you’ll carry with you through the course of your life/career?
Cola: It’s dope that I got to dip my toe into drama. Before Good Trouble, I was squeezing rubber chickens and squirting water out of a flower. Another perk is constantly observing directors, studying our scripts and absorbing creative energy from my fellow castmates. Things like that stick with you and ultimately benefit your career. Being on this show has taught me many lessons and tricks, and I’m grateful for that. I’m spoiled.

TrunkSpace: As far as your stand-up career is concerned, was comedy always in the cards? Were you a “funny” kid, even at an early age?
Cola: I was voted “funniest” in marching band, “most spirited” in pep squad, and “most outgoing” in my senior yearbook. At a young age, you could count on me to say the darnest things. I’m not sure if I was born an extrovert, but I sort of found my voice in high school and I ran with it. I did “bits” in class and those class clown moments were such a thrill. I knew that this was my calling!

TrunkSpace: When did you decide to pursue stand-up comedy and did you make a plan for how you would attack things?
Cola: There’s no plan, exactly. Even now, I’m kinda going with the flow with a bunch of short-term goals. Stand-up isn’t overnight. With acting, you might book your first role ever and that immediately changes your life. With stand-up, you gotta put in those hours. There’s no faking it. I finally did stand-up officially (not counting the dabbles in high school) when a co-worker of mine at the radio station put on a comedy show. Everyone knew it was at least a bucket list sitch for me, so my boss convinced me to do it. The rest was history. That was March of 2016. Now I’m still doin’ the damn thing, grinding and getting better at my craft every day!

TrunkSpace: What is your most memorable stand-up performance experience (good or bad!) that will stick with you and why?
Cola: I recently opened for Ronny Chieng’s Netflix special taping and that was one for the books. It was a legit theater, so it was my biggest audience to date. All the Asians seriously showed up and came to support. I felt so proud to perform in front of my community and see their faces light up. People I’m inspired by, like Randall Park, were giving me compliments backstage. What a dream.

TrunkSpace: What has been the highlight of your career as a whole thus far?
Cola: There’s been lots of epic moments. I’ll say that working with Jon M. Chu is up there. He directed the pilot of Good Trouble and it was a huge deal for me. This was before Crazy Rich Asians even hit theaters, but it was so highly anticipated. My mom still brags to her friends and shows them photos I took with Jon. I can’t wait to hopefully work with him again!

TrunkSpace: Time machine question. If you could jump ahead 10 years and get a glimpse of what your career looks like a decade from now, would you take that journey? If not, why?
Cola: Tough one! I often say “ignorance is bliss” so let’s just stay in the present and find out what happens when I get there in 10 years. (Laughter)