TrunkSpace: How would you describe your music?
Showcase: Joy/sex/dance music, absurdist psychedelic soul/funk.

TrunkSpace: When we first saw your video for “Love is a Mystery” we thought to ourselves… “What the hell are we looking at?” Less than one second later we were singing and dancing along. What have you done to us?!?!
Showcase: Yes, babies! I think you know exactly what we did to you.

TrunkSpace: In all seriousness, that song, like most of your songs, is extremely catchy and latches onto your brain in ways that successful songs are supposed to. Our question is, how much of what you do is performance art and how much of it is writing songs that are going to resonate with people? What is the balance that you’re creating when you create?
Showcase: I think the two aspects should combine to make something brand new. You can’t just write a song just to write a song… it can’t just be a funk jam in E. It has to move the people and reflect a moment. And though performance is paramount, if the crowd doesn’t walk away with the music in their head and their hearts, we aren’t doing our job.

TrunkSpace: There’s not a lot of originality in music. What’s done has been done and then done again. We don’t think the world has seen a Johnny Showcase before. Agree or disagree?
Showcase: They’ve seen bits and pieces of us in everything they grew up with. We are just classic showbiz, drawing on elements and influences that turn us on… plus our own bizarre leanings. Song + funky dance + mystical owl + sexy clowning + Rhode Island expatriation. It’s cookie cutter stuff, really.

TrunkSpace: When you peel back the layers of the onion, who is Johnny underneath all of the glitz and glamour and who are you performing alongside of?
Showcase: It’s actually quite simple: Johnny Showcase is a jazz crooner from northern Rhode Island, now a South Philadelphia freak funk folk hero. He is the lips and the hips. His Spiritual Adviser, Rumi Kitchen, is a cosmic space/time traveler and rockroller. Backup vocalists, The Truth, flank and funk, never speak, and get real mad when Johnny makes them spit out their gum. The mystic ticket is the machine… the hip ship.

TrunkSpace: We have yet to see a Johnny Showcase show, but it’s on our bucket list now. Explain how you translate what we’ve seen in your videos to the stage? We envision it being some big 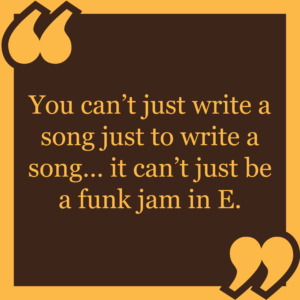 party where everyone gets liquored up and makes out in industrial strength foam… and we want in!
Showcase: TrunkSpace babies, you gotta get with us. The live experience is THE THING! We bring crowds to the height of ecstasy… the foam is actually just coming from the sides of their mouths. Still industrial strength, though. Liquor optional. It’s really just a joyful happening. Our live show is a big, sexy, sweaty, love joy fest.

TrunkSpace: It seems like there are a lot of moving parts to what Johnny Showcase is, both musically and in terms of the stage show. Is it difficult to manage just from a logistics standpoint?
Showcase: It’s a mess. I don’t know how we even do this.

TrunkSpace: This country is more divided than ever. Is it possible that Johnny Showcase is the man who could bring us all back together?
Showcase: That is kind, but I don’t know what is going to bring this thing back together. Getting #45 out of power would be a start, and his sycophantic enabling cowards in congress. And then some listening and understanding. Anyhoo…

We will keep on with a message of peace and love, but it’s a musical message… and won’t always reach the tone deaf.

TrunkSpace: What can fans expect from Johnny Showcase in 2017?
Showcase: New songs and touring our live show outside the tri-state bubble: DC, Baltimore, and up north to sweet New England. Also, got a kids album and show in the works. Just you wait… that shit is gonna be killer.