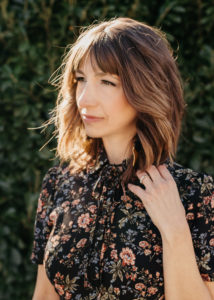 TrunkSpace: Your latest album “The Driveway” dropped in August. As you gear up to release new music into the world – and ultimately relinquish control over it – how do you prepare? Is it easy to let the universe have the art you have created or can it be difficult to say good-bye to it?
McNeal: I never really feel like the music I create is mine to keep. In fact, one of my deepest joys as an artist is having the opportunity to share my work, and getting to hear how my songs speak to people. And thankfully, I don’t feel like I really have to say good-bye. As I share my songs live I feel like I get to continue to hold them, and watch them take on a life of their own. I love watching a song find its way in the world!

TrunkSpace: You were raised in a very musical family. As you listen back to “The Driveway,” can you hear where your roots – particularly those early influences from your mom and dad – have directly impacted your songwriting?
McNeal: My parents had artists like Emmylou Harris and Vince Gill on repeat on the record player in my house growing up. And most evenings my dad had a guitar in his hands. Stories, melody and old-school country were the soundtrack of my youth. It just feels like home, and as I found my voice as a songwriter, I think it was just a natural outpouring – something I never really thought too hard about. Emmylou remains a huge inspiration to this day, and I can absolutely hear that influence on a song like “When the Fire Came.” When I was sending early mixes to my dad and he heard “Radio Station,” he said, “Finally! A country song!”

“The Driveway” has a bit darker color palette, but those country roots are absolutely still there, and it’s so much fun to get to share that process with my parents.

TrunkSpace: You have said that, as a teenager, you moved away from the genres of music that your parents listened to and performed in, and now you have found your way back home, so to speak. Do you feel like, as a songwriter, it was important for 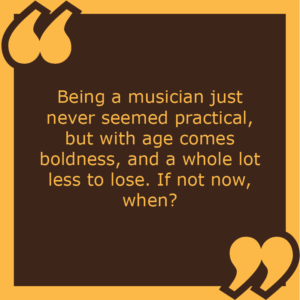 you to experience everything else that you experienced musically before you could fully invest in the sound you’re currently writing and performing in?
McNeal: For sure. My biggest musical hero as a teen was Prince (and honestly, he still is!), and while most people would consider his genre to be the complete opposite of where I landed, I see it differently. He was probably one of the most prolific writers of our time – he took risks in every aspect of songwriting, and I learned a lot about melody, improvisation, and storytelling from his work. Beyond Prince, some of my favorite artists in my late teen and college years were Edie Brickell, Sarah McLachlan and Sting. So I while I wasn’t listening to Americana or country, I don’t feel like I wandered too far. All of those artists were at their core, storytellers, and regardless of genre, I think that’s what I’ve always been drawn to.

TrunkSpace: If someone unfamiliar with your music sat down and listened to “The Driveway” front to back, what would they learn about you as an artist and person?
McNeal: I think they would hear someone who’s not afraid to sit with grief and hardship, and hopefully within some of that melancholy they would also hear someone who is bent toward hope. As an artist I definitely love songs that have an achy, moody feel both sonically and thematically. However, as a person, I’m actually pretty light-heated and upbeat – hopefully that comes through on a song like “Little Log House.” Overall, I hope that people will hear a bit of themselves in these songs, and feel less alone in what they might be going through.

TrunkSpace: What are you most proud of with the album?
McNeal: I’m really proud of the process with the team, especially with my producer Ryan McAllister. When I write a song, just voice and guitar, I quickly hear all of the sonic possibilities in my head. I often have a pretty good idea of where I’d want to go with it in the studio, but because I only play one instrument it can be hard to articulate exactly what I want. I feel like Ryan hears the same things I do, and he knows exactly how to make it happen. Same thing for the players – they all connected with these songs right away and seemed to know instinctively what to play. I’m just really proud of what we all created together.

TrunkSpace: What would 12-year-old Jessi think of your musical journey thus far? Would she be surprised by the path you have taken?
McNeal: Oh, I think she would be giddy, and so would 20-year-old Jessi! I’m a late bloomer for sure, but this has always been a deep-seated dream. I think the younger version of myself never thought I’d actually make it happen. I was always a strong student and became much more career-minded during college and the years after. Being a musician just never seemed practical, but with age comes boldness, and a whole lot less to lose. If not now, when? I’m so glad I took the leap.

TrunkSpace: We love great lyrics… the kind that stick with us well after the song comes to end. What’s a favorite lyric of yours that you have written and why? 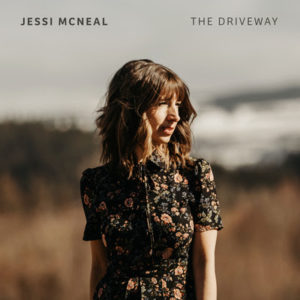 McNeal: I think my favorite lyric from this album is “Now you’re a shadow up against a pink sky” from the title track. I just love lyrics that have visual beauty, and there’s just something about the imagery of an airplane in a sunset sky. To me it’s a symbol of both adventure and loss, hello and goodbye. That’s a big part of what this album is about – the in-between, and that particular song is about the hope of reunion and reconciliation. I love that this lyric holds both beauty and ache – it just feels very true to me.

TrunkSpace: Are you someone who can shut off the creative brain or is the porch light always on? Are you constantly processing melodies and lyrical snippets?
McNeal: I am almost always in a creative mode of some sort. In fact, in one of my past jobs my boss called me “the singing bookkeeper” because I was always humming or singing! And even if I’m in a stretch of time where I’m not actively songwriting, I’m always taking in ideas and mental notes. I’m a painter as well, so in addition to stories and melodies, I love gathering visual inspiration. I’m grateful to be in a season where I can do both full-time. It’s such a gift to have the time and space to just grab my guitar or head to the easel when inspiration strikes.

TrunkSpace: How long did it take you to discover your voice as a songwriter, and do you think that creative point of view is constantly evolving?
McNeal: I was still experimenting quite a bit on my first album in 2013, but by my second album in 2015 I had developed a clearer sense of my genre and style as a writer. I definitely still evolving, and I don’t want to box myself in, but I think it’s safe to stay that you’ll find me in the folk/Americana vein for as long as I’m a musician. I love this genre because I feel like there’s a lot of room for me to experiment and grow, but there’s something about roots music that keeps me grounded. I love poetic language, but I also think there is a pure and relatable beauty in plain-spoken lyrics. I feel like I’ve found a sweet spot there, at least for now.

TrunkSpace: Time machine question. If you could jump ahead 10 years and get a glimpse of what your career looks like a decade from now, would you take that journey? If not, why?
McNeal: Absolutely! I recently told my producer that I plan to make records with him until I’m 80, and I feel like I am only just getting started. I am so grateful for artists like Emmylou Harris, Shawn Colvin and Patty Griffin who just seem to get better with age. They’ve paved a way female singer-songwriters to keep at it for decades, and I can’t wait to see what’s ahead.

“The Driveway” is available now.