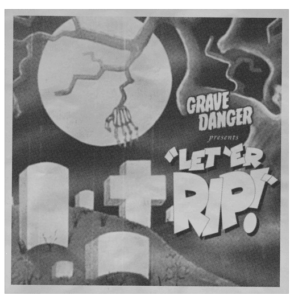 TrunkSpace: Though Grave Danger has a lighthearted, macabre persona of a “Skath” band, it’s clear that underneath that mask is a group of extremely talented musicians. How did this idea take hold and manifest from a daydream into a reality?
Schwantes: Dane and I have known each other since high school and one of our favorite pastimes was making up fake bands (when we weren’t playing together in real bands). Our shared love of wordplay led us to the idea of “skath” a few years ago, but it never amounted to anything. Then sometime last year Dane texted me, “Ok, dude. Let’s do it: Let’s write a couple of skath songs.” (Dane is very good with punctuation, even in his texts.) We started coming up with song names and I wrote most of the lyrics to “Grave Danger” that afternoon. It was a lot of fun so we brought in other people to flesh out the band and decided to see this thing through.

TrunkSpace: Which came first? The Ska or the Goth? And what other musical entities influenced your sound that you were looking to achieve?
Schwantes: I think it’s safe to say, the ska came first for us. Several of us were in a ska band called Captain Supreme back in college. Ska is such a light-hearted genre that it was a lot of fun to mix in an element of 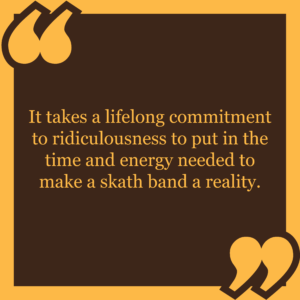 One of the first artists we thought about when finding a sound and style was Oingo Boingo. Danny Elfman is obviously a brilliant composer and musician and Oingo Boingo’s stuff just has a great reckless weirdness to it. Reel Big Fish was certainly a big influence for the type of goofy ska we wanted to write and I was listening to a lot of Streetlight Manifesto when writing horn parts. They were a big reason why I was insistent on having a four-piece horn section.

TrunkSpace: What blew our minds like a zombie on the receiving end of a head shot was that Grave Danger is comprised of a group of family and friends. This isn’t your Branson family band, but how is it that you all are so musically inclined? Does the musical vein run deep in the family? Or did you simply make a deal with a cloven-hoofed figure on a dark road in the middle of the night?
Schwantes: It turns out that you can get a much better deal with the devil if you’re willing to go in on a group rate, plus Satan spent most of the ‘90s following Less Than Jake around on tour so he has a soft spot for ska.

TrunkSpace: When we were digging up info on how Grave Danger came to be, we couldn’t help but identify with the story of using gym class to come up with creative endeavors instead of taking a dodge ball to the face. Do you feel that those early creative endeavors laid the ground work for what would later become Grave Danger?
Schwantes: Sure. Grave Danger came into existence because some old friends wanted to keep making fun music together and the kind of music we made was really shaped by our shared appreciation for well-executed preposterousness. Back in high school, our fake death metal band, Throbbing Reaper, actually played a few shows. An impressive feat, considering we never practiced or wrote any songs. 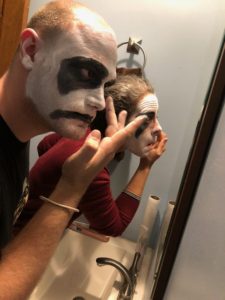 It takes a lifelong commitment to ridiculousness to put in the time and energy needed to make a skath band a reality.

TrunkSpace: Another interesting morsel to us was that Grave Danger came together only after founding members David Schwantes and Dane Erbach moved apart from one another. What was it about being cleaved apart that made you guys come together to form Grave Danger? And what was that long-distance creative partnership like?
Schwantes: I think that living a few thousand miles away from each other made us really miss making music together in the way we were able to in the past.

The collaboration involved a lot of emails, phone calls, and texting. I’d record demos and send them to Dane for feedback. We’d have long email and text threads about potential band names and song ideas.

As we started doing the final recordings, we worked in a similarly distributed way, sending isolated tracks and mixes back and forth.

It was actually a pretty weird way to make a record. In the past we were always in the same room while playing or recording songs so working like this resulted in a much longer feedback loop. It was an interesting way to work but there were certainly times where it would have been nice to just sit down and work through an idea together.

TrunkSpace: Dave, you played guitars, bass, keys, tenor sax, bari sax and backing vocals for “Let ‘er Rip!”. We picture you looking like the guy in the Hormel Pepperoni commercials playing six instruments at once and singing, which is beyond impressive! How did you come to be so well-versed in so many instruments? And do you have a favorite that you enjoy the most?
Schwantes: I had a TON of fun playing lots of instruments on this record. I’ve always enjoyed learning new instruments and a ska band is a great place to use a lot of them. I probably had the most fun with the bass and saxophone parts.

Ska bass is always fun to play and with the style of this band I was able to build some cool little lines around simple minor scale ideas. 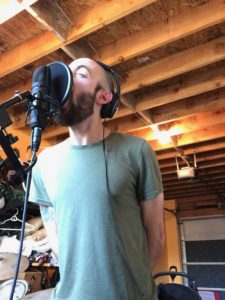 The saxophone work was great because I had been away from the instrument for a long time and I really enjoyed getting back into it. I spent a lot of time hanging out in my garage getting my saxophone chops back up to snuff and just getting reacquainted with the instrument. Doing the bari parts was particularly rad just because I really enjoy blatting out those loud low notes. I actually had a hard time tracking down a bari for this record and ended up having to drive about an hour out of Berkeley to rent one.

TrunkSpace: What has been most rewarding about putting together not only your EP but the creation of Grave Danger in and of itself?
Schwantes: It’s been fantastic to get to make music with old friends again. We went out of our way to involve lots of people. (My 1 1/2 year old son does some vocals in one of the songs!) Working together and hearing these songs come together has been really rewarding. We all have kids and jobs and lots of other things in life that require our attention and I love that we were able to take the time to try something crazy and weird and made it a reality.

TrunkSpace: Halloween is nearly upon us! What sort of frightful festivities will fans find Grave Danger doing on this night?
Schwantes: On Halloween night I’ll probably be eating all the Twix that I should be handing out to neighborhood kids and then I’ll be hosting a record release/late Halloween party this weekend.

TrunkSpace: What’s next for Grave Danger now that you’ve released your EP into the dark of the night? Are there more new songs or a tour in store for all the ghastly boils and ghouls out there that dig your groovy Ska and Goth brew?
Schwantes: I really want to just enjoy the release of this EP. We all put a lot of work into making it happen and it’s fun to get it out into the world. That said, I’ve started laying down the bones for some new songs. I’d love to do a full length record. I think now, more than ever, the world could use more skath.