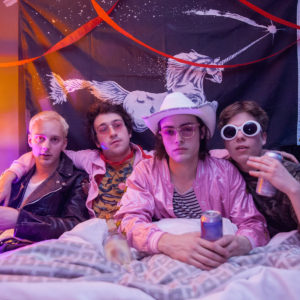 TrunkSpace: How would you describe your music?
Goodbye Honolulu: We describe our music as garage rock. It has a really fun and party vibe to it, mixed with a classic rock feel, and it’s super loud!

TrunkSpace: You guys ran a record label while you were still in high school. Are you able to apply what you learned in those days to what you’re doing currently with Goodbye Honolulu?
Goodbye Honolulu: We’re still running that label now! Fried Records started as a way for us to release our own music, collectively and separately. All of us write in the similar vein of garage rock, so we wanted an outlet to get it into the world. In the last year and a half, it’s really grown. We have about 12 artists on the label, putting out music, as well as visual artists from Toronto and Montréal and videographers. The thing we’re most proud of is the scene we’ve created. When we throw all ages shows with Fried Records presenting them, we always manage to bring out hundreds of kids, who are really into the music our artists create. On top of that, we’ve managed to create a safe environment for people to come see awesome shows and not feel uncomfortable or threatened in any way. At all ages shows, you always run the risk of kids being vulnerable to some form of harm, but we’ve been able to avoid those pitfalls. We have a great, supportive, understanding, diverse crew of people on Fried Records, and the response to this little idea we started in high school has been incredible.

TrunkSpace: Your new single “Mother To A Brother” has a vintage feel to it, without it feeling forced. The chorus in particular has a very raise-a-drink-in-the air singalong vibe. When you guys are writing new songs, do you go in with a concept of how you want something to sound or just let the songs become what they become?
Goodbye Honolulu: When we first start working on a song, we have a general idea of what we want it to sound like, and where we want it to go. When everyone starts playing on it, and adding their own touches and ideas, we end up with something better than we had in mind. We’re at our best when everyone is a contributing force. “Mother To A Brother” was the first song we really came up with all together. It just started as a chord progression and Jacob singing that verse lyric. When everyone joined in and put their spin on it, the party vibe totally came across.

TrunkSpace: Goodbye Honolulu has released a number of singles. What is the thought process behind releasing single tracks as opposed to an EP or LP? It’s a nice throwback to the earliest forms of commercial rock, but does it serve a benefit to the band?
Goodbye Honolulu: We put out one album at the end of 2015, called “Heavy Gold.” It’s a solid collection of songs, recorded at Orchard Studios, produced and mixed by John Switzer (producer for Jane Siberry) and we did have some singles come off of it. We like to put out singles just to build the hype around an album, or a bigger group of work. Making videos to coincide with the singles we release is always really fun! Ultimately though, releasing a full album is what we’re working up to. We have an album ready to go, produced and mixed by Mike Turner (former Our Lady Peace guitarist), recorded at his studio, The Pocket Studios, as well as Noble Street Studios, and we hope to have that out very soon.

TrunkSpace: When it comes to getting the word out about who Goodbye Honolulu is, what have you found to be the best way to reach people with your music at this stage in your careers?
Goodbye Honolulu: Social media is a really great way to reach people for us. Lots of people discover our band from other places, besides Canada, just by seeing our Instagram or Facebook posts. We opened for Hinds last March on a portion of their American Leave Me Alone Tour, and that literally started by them sending us an Instagram DM and asking if we wanted to go on tour with them! Besides that, just playing a lot and always being at shows around other musicians, or people who enjoy our type of music seems to draw people in.

TrunkSpace: Rock as a genre has taken a hit in the mainstream for a number of years now. It comes. It goes. But it never seems to enjoy the same level of mainstream success as it once had. Do 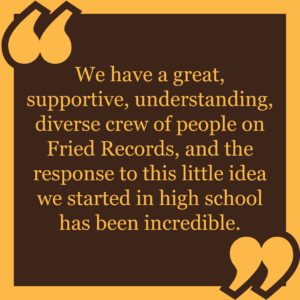 you think this is bad for future generations or do you think kids of tomorrow will still find rock regardless of where it’s coming from?
Goodbye Honolulu: When we host our own shows through Fried Records that are all ages, and we sell out venues with hundreds of kids there, it’s clear there’s a demand for rock music. While it may not be what’s on the charts right now, it’s obvious that it’s still very important to people. Kids will still seek it out at their local venues, or go to see their friends’ band’s shows, or host their own shows.

TrunkSpace: What does Goodbye Honolulu’s music… in terms of creating it… do for the band specifically? Is it an outlet for something that the outside/regular world can’t provide?
Goodbye Honolulu: We’re just four dudes who love to play music together. We’ve been playing music for most of our lives now, and it’s our absolute passion. It’s certainly a way to express what we feel and how we think, but we can’t picture doing anything else!

TrunkSpace: As a band, do you have specific goals in mind as far as what you hope to accomplish
Goodbye Honolulu: Our specific goals right now are to get our album out, and above all to tour! Our favorite part of being in a band is playing shows, and playing lots of them! We want to go all over and just keep playing to as many people as we can.

TrunkSpace: If the Goodbye Honolulu hit it big tomorrow and became a household name, how do you think the band would be able to handle those pressures?
Goodbye Honolulu: Since being a successful band has been our dream all along, since we were kids, we’d definitely be able to deal with any pressure. If we were lucky enough to be successful and make a living off our band, that’d be a dream come true and there’d be nothing that would discourage us from losing that.

TrunkSpace: What can fans expect from Goodbye Honolulu in 2017?
Goodbye Honolulu: We’ll hopefully be releasing our album very soon, definitely this year. Besides that, shows, shows and more shows! We want to play as much as we can, go to new places we haven’t been before, in Canada and the U.S. Europe would be a dream, and hopefully we make it there very soon. Just keep looking out for us, we’ll be in a town near you very soon!