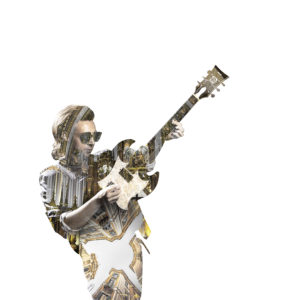 TrunkSpace: How would you describe your music?
Gold Casio: A gold VR headset is placed on your head and you are immediately transported to another world. A world where it’s always night and the music never ends. Amongst the glitter and gold streamers you discover that here, magic is real, the party does go on, and the Gospel of Disco reigns supreme. At every turn the ecstasy of ego-death awaits you.

TrunkSpace: Gold Casio’s music seems to be at home in the studio, but at the same time, the beats easily suggest a party at every live show. How does the band translate the sound to the stage?
Gold Casio: Our music is usually formulated in the studio and then reverse-engineered for the stage. It’s dance music but we take pride combining a live band performance alongside the electronic element of our music. And, yes we aim both visually and musically to make every show a party.

TrunkSpace: Speaking of stage, there seems to be a lot of gold throughout when the band takes to it. Where did the idea of dressing the stage in all that glitter come from and how has it grown?
Gold Casio: We like the idea of our art-form transcending music and so we conceived of Gold Casio as an experience that is both auditory and visual. We wanted a way to distinguish our live set, and we don’t really have a knack for subtlety.

TrunkSpace: Showmanship and band branding is something that seems lost on a lot of acts these days. Gold Casio on the other hand seems like a throwback in that regard because you have established a look and feel to the band as well as the music. Was that a decision from the outset?
Gold Casio: Yes.

TrunkSpace: Your first full length album is due out soon. Does the album have a title and what can we expect from it as a whole?
Gold Casio: We’re experimenting with new ways to curate the release of our music in the digital streaming landscape.  The one thing that you can expect for sure is that we’ll be rolling out art and music in some form every month of 2017.  We’re going to keep you in the dark about the specifics for now.

TrunkSpace: Did we read correctly that the album was recorded in a church? If so, how did that come to be? 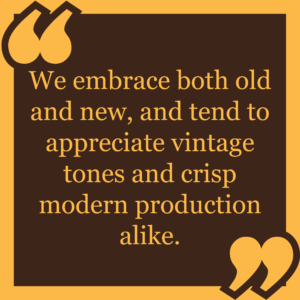 Gold Casio: Cosmic intervention and fortuitous timing.  Several of us live in a repurposed church and we set our studio up in the sanctuary.

TrunkSpace: Your music is a throwback to the sounds of decades past, particularly in the instrumentation. At the same time, the songs themselves sound modern. How much focus does the band put on writing music that is nostalgic, yet at the same time, doesn’t sound dated?
Gold Casio: It’s never a conscious choice, we just tend to gravitate towards these sounds because of our range of inspirations. We embrace both old and new, and tend to appreciate vintage tones and crisp modern production alike.  We really like dance music but these days a lot of that starts to feel the same, so we’re trying to change that.

TrunkSpace: Gold Casio features both male and female vocals. How does the band decide which voice fits for a particular song, and, do you try out both in the development stages of new tracks?
Gold Casio: It can really depend from track to track and happens pretty organically. It’s kind of just our band dynamic;  we all write parts, sometimes we write parts for each other, and ultimately choose what sounds most magic.

TrunkSpace: How does the band anticipate supporting the new album in 2017 and what can fans expect as the year rolls ahead?
Gold Casio: You can expect to see us in cities along the west coast and beyond, we’ll be on the road a lot this year. We hinted at this a little, but you can be on the lookout for something new from us every month of 2017.