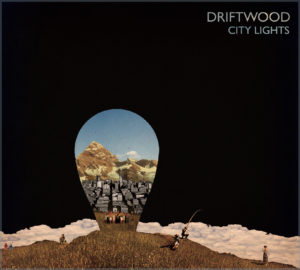 TrunkSpace: How would you describe your music?
Byrne: Our music is a blend of so many things. At the heart of it, our music is rock and roll but we are all influenced by so many different artists and that really comes out in the songs. I think a large part of what makes our sound is that we play pop and rock tunes on acoustic/bluegrass instruments.

TrunkSpace: Driftwood seems to experiment in the blending of musical genres and do so in a successful way that makes it all seem so organic. At its inception, was the idea always to bring varying sounds and tastes to what the band was doing creatively?
Byrne: That was never the idea for the group. The original idea had been to take these acoustic instruments and play folk music and travel the country playing venues and the streets. As we started adding our original tunes into the mix though it slowly became clear our style of writing and arranging was different from folk and bluegrass.

TrunkSpace: Does that blending of sounds bring diversity to your audience? Are fans drawn to certain genres finding themselves standing next to fans of another genre while sharing the same space at a Driftwood show?
Byrne: I think that does happen quite a bit. The first thing that comes to mind for me is that we get the guys who are hardcore metal fans at our shows telling us they usually hate bands with our instrumentation.

TrunkSpace: The band is packed with songwriters. How does having multiple bus drivers in the bus work in terms of all of them agreeing on the location/direction you’re ultimately driving in? 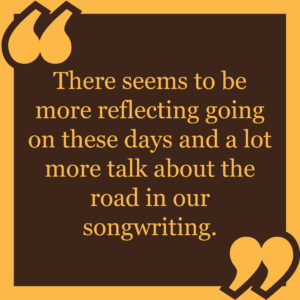 Byrne: Having three songwriters does make it tricky to maintain a cohesive sound and it is something we do consciously think about. We all have different writing styles and we all do try and write some tunes specifically with the band in mind. I think one thing that always makes it fit together are the arrangements. A song can sound like one thing and then end up having an entirely different sound once it is arranged.

TrunkSpace: “City Lights” is your fourth album. Musically, what are the biggest differences you personally hear when looking back on your first album to where you currently are with this particular album?
Byrne: We have definitely all become better musicians and our voices have developed/matured over time as well. I think the topics we write about has changed the most though. There seems to be more reflecting going on these days and a lot more talk about the road in our songwriting. That makes sense considering we’ve spent the last seven years on the road.

TrunkSpace: Do the recorded tracks differ in any way from how you perform them in a live setting?
Byrne: Often they will differ a lot. It’s a really difficult task to capture the energy of a live show in a studio album. We have been working on trying to do so for years now and I think we came very close with “City Lights”. When we are in the studio we are thinking a lot about how it will be to perform what we are recording and sometimes it requires playing two different versions of the song. It’s a challenge we all like though.

TrunkSpace: You’re currently on tour. Is space an issue when you’re traveling with a double bass?
Byrne: We’ve got it figured out in our current van! We are searching for a new vehicle and that is certainly one of the biggest factors we have to take into consideration.

TrunkSpace: What is the ultimate goal for Driftwood as a band when it comes to the music itself?
Byrne: I don’t know if we can really nail down a goal musically. I think, as simple as it may sound, the goal is to always be improving and bettering ourselves and musicians, songwriters and performers.

TrunkSpace: What can fans expect from Driftwood in 2017?
Byrne: It’s been a really rockin’ year thus far and we are excited for all of the festivals etc. we have coming up!