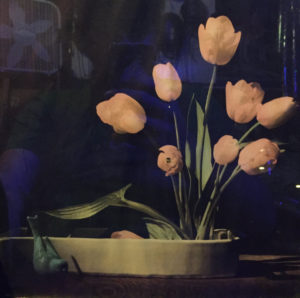 Members: There’s a rotating cast, but the most recent line-up was myself, Cat Hoch, Eric Sabatino, Thomas Malbus, Chris Hoganson and Andy Rayborn

TrunkSpace: How would you describe your music?
Cone: Goth Soul Jazz Art Pop

TrunkSpace: You seem to take the term artist to a different level, mixing both music and art into a singularly blended experience. Was that always the intention with your music or has the approach changed over the years?
Cone: I went to (f)art school for a million years and that definitely informs my approach to making music and being a musical artist. I just want to make a visceral, visual, sonic world to hang out in. I think a lot of people who are visual artists or “artist” artists before they make music can end up in that position. All of my favorite musical artists were more than just songwriters or players and had some insane OCD, fanatical relationship with their esthetic that made them recognizable visually, not just aurally. My goal is to make my own version of something like that.

TrunkSpace: When it comes to lyrics, are you always trying to say something with your music or are there instances where a song just sort of writes itself and there’s no underlining message involved?
Cone: Sometimes my lyrics are really psychological, heavy, emo doo-doo that probably seems pretty trite to other people but is genuinely a form of real psycho-therapy for me. I really do care a lot about storytelling but not necessarily in a linear way. I jump around between perspectives, characters and situations (sometimes mid verse) to try and make things more coded and interesting. Other times, I’m just trying to rhyme with the coolest, funnest-sounding words I can think of. In the end, I find that the shallow stuff is usually the most appealing as a song… at least to myself.

TrunkSpace: It seems like the music is 100 percent you. Does that make the songwriting a solitary experience and does that process keep you at a creative distance from other people? In that we mean, do you have to shut yourself away from others in order to create?
Cone: I don’t have to shut myself away in order to create, but I do frequently end up going that route. I almost always get really obsessed with an idea and will want to work on it for so long that other people don’t always stick around. I have tunnel vision and won’t even realize that I’ve been redoing the same overdub for three hours. My cat Apollo is always there though, so he keeps me company. Collaborating is always really inspiring and refreshing, but usually it happens after I’ve already laid out a foundation of a song and then invite someone in to play a part or make something up.

TrunkSpace: What inspires you? And we don’t mean the influences covered above, but instead, the ideas or experiences that strike you in any given moment. What feeds your creativity?
Cone: Feeling miserable, being bored, being tired, being sad, feeling fear, being happy, being horny, watching a really good movie, hearing a really good record, looking at a painting in a box with a fox wearing sox ripping a solo that rox — a bit embarrassing to admit but I was once in the middle of using my jada stevens pussy and inspiration came to me. I can honestly find inspiration anywhere. More: daydreaming, night dreaming, forgetting, remembering, transcending, my girlfriend, my friends, my enemies, the feeling of going crazy if I don’t work on something…

TrunkSpace: When it comes to writing songs, do you tend to start with a sound or beat and then add from there? Is there a linear process for you? 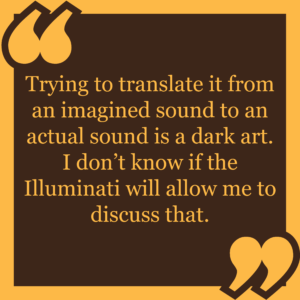 Cone: My favorite way to start is playing my Wurlitzer. It usually forces me to write better chord changes and think more clearly about it as a ‘song’, instead of a random lofi-hifi overdub collage on my laptop (which I also love doing). Either way it eventually becomes an overdub party on my computer. Sometimes I’ll also start by having an idea of a hook or a sound effect or sound on a synth I’m hearing in my head. Trying to translate it from an imagined sound to an actual sound is a dark art. I don’t know if the Illuminati will allow me to discuss that.

TrunkSpace: What seems really interesting about the music that you create is that you’re sort of capable of playing anywhere, right? You could play a small coffee house or a large amphitheater and still be able to have either crowd follow you on the journey. Is that versatility a benefit to you as a musician?
Cone: I hope so. I try to keep myself open to whatever the opportunity is. I’ve been doing some improv shows lately where we make up songs as we play and it’s super fun. I live in a really good city for that because there are a lot of incredibly talented people around and we all just want to get loud and put on a show.

TrunkSpace: You’re based in Portland, a city well established for its creative core. With so many other artists and musicians creating in a relatively small space, does it become more difficult to rise above given that everyone is competing for the eyes, ears and minds of those who live there?
Cone: I’m not sure. I don’t really have that figured out yet. It’s great to have opportunities for exposure and for people to find out about what you’re doing, but promotion is its own skill to have which is pretty confusing and takes time. Portland’s music scene is incredibly supportive. I love my friends and the music they’re all making. There’s always something new and interesting going on and I appreciate moments when it feels more like family, not competition.

TrunkSpace: What do you hope to accomplish with your musical career?
Cone: I just want to make music and be creative full-time. It’s the same thing everybody wants, I think. We all just want to figure out how to replace our day jobs with being creative. Other than that I really want to keep meeting other artists and be inspired to make as much stuff as possible.

TrunkSpace: Separate from career goals, what do you hope people take from the music itself?
Cone: Tough question! I don’t usually think about what I want other people to think when I’m making music. I guess I want people to be inspired and to feel emotions and to hear my scream in the big, weird, crazy, scary universe we’re sharing.

TrunkSpace: What can fans expect from Bryson Cone in 2017?
Cone: Hopefully, a lot! More music, more shows, more stuff… I’m working on a full length album right now that I hope to be complete in a couple of months. I’m also about to make a music video for “Desire” with a dear friend and badass female artist named Misha Capecchi. We haven’t started yet but she’s awesome and I bet she’ll make it amazing. Google her, she rules!