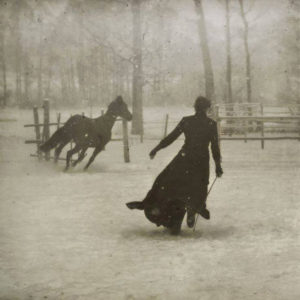 TrunkSpace: How would you describe your music?
Bakshis: I guess indie pop/rock would probably be the easiest way to describe it, but we try to change things up as much as we can.

TrunkSpace: In terms of a member headcount, the band seems to grow, reaching as high as 10 members at times. Is there a core to the band or is the lineup ever fluid?
Bakshis: At one point, there were 14 regular members, and over the years, we’ve had roughly 40 people play with us, coming in and out as needed. For this release, we trimmed it back to five of us.

I do most of the writing, and my brother [Scott] helps out with some of the arranging and getting me over writer’s block when I run out of ideas. Chris, our drummer, has been with us for a few years… we actually went to high school together and used to teach out of the same music shop after college. Phil (guitar) hasn’t been with us long and will be moving back to France later this year. And Andrea (cello) has been playing with us for a year or two since we started developing this acoustic lineup. They’re all truly amazing. I think we’re going to keep this sort of pared down acoustic lineup for a little while, see where it takes us.

TrunkSpace: “Across the Open Field” was released on March 4. What did the band hope to accomplish with the EP and now that it’s out of your hands, do you feel as though you achieved those goals?
Bakshis: We’ve been around for quite a while now, in some form or another, but hadn’t actually put out a record. A lot of it was just “let’s get something out there already.” We’re not really the kind of band that plays out every weekend at the bars, so a lot of our exposure comes though promo and publicity, and you can’t do a lot of that without something to promote.

TrunkSpace: You recently hosted your record release party. What was that experience like and did it feel like a coming out party for the EP and the music featured on it?
Bakshis: The release show was great! We held it at The Hungry Brain in Chicago, which is one of our favorite spots to play. Unfortunately, due to some extenuating circumstances, we weren’t able to get the actual physical CDs printed in time. But the EP went up online and we sent out the links and have been getting a lot of great response to it so far.

TrunkSpace: Your music is very melodic. How does that sound, which seems so at home it the studio, translate to the stage?
Bakshis: I think it works out pretty well. Our recordings are all done live with as few overdubs as possible, so what you hear on the recording is largely what you’re going to hear at the show. Like I said, we’re fortunate to have some pretty great players!

TrunkSpace: Outside of your own original music, are there any covers that have become staples of your live sets and what was it that drew you to performing those particular songs? 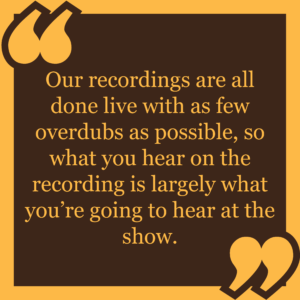 Bakshis: I know some bands shy away from covers, but I love them. With the bigger 13-piece lineup, we had maybe 30 or 40 covers we’d do, including stuff by Morphine, Nick Cave, Mr. Bungle, St. Vincent… really a giant range.

With this lineup, we’ve got, I think, four regular covers we do so far:

“Watching the Wheels” by John Lennon

They’re all songs that I just really enjoy. I think they give the audience a nice little touchpoint, something they can maybe identify with a little more readily that helps them put your original stuff into context.

TrunkSpace: There is a lot of wonderful instrumentation highlighted in Belleisle. Are you continuously trying to see what you can bring to your sound from an instrument/musical standpoint to further enhance your melodic sound?
Bakshis: For sure. We started with the intention of being a three-piece recording project, but every time I got a new idea to add something to the arrangement, I had to go out and find someone who could play that part live. Then it became a challenge to see if I could (or should) arrange that instrument for the other songs, or if there was maybe something else that fit a bit better. Brass, strings, keys, backing vocals… there’s no reason not to try it out. Maybe it works, maybe it doesn’t, but you never know until you give it a shot.

TrunkSpace: Everyone says that promoting music, at least self-promoting, is easier now than ever thanks in large part to social media. However, when everyone is doing it, it muddies the water. How does the band view promotion and, how do you attempt to stand out in a landscape that is dominated by bands and artists all trying to bring as many eyes and ears to their music?
Bakshis: Promotion is huge, but I don’t know that self-promotion has gotten any easier. I’m not sure how things are in other areas of the country, but in Chicago, it’s hard to get anyone’s attention unless you have some sort of in, or relationship with them already. Or you need to already have some buzz going around yourself before anyone will take you seriously. It makes it all terribly confusing and weird.

I work in advertising and marketing for my day job, though, so I’m starting to be able to apply some of those skills to my band. Mostly it takes a lot of time and patience to get through to anyone who can help you out, and with two kids and a day job, I don’t have a lot of time (or patience!). You can always try and hire a publicist, but sometime they, too, won’t work with you unless you have a certain amount of buzz going.

TrunkSpace: The band’s home is Chicago, a city known for always having a great music scene. Where does Belleisle fit into that scene and is it a supportive/nurturing scene or a competitive one in its present 2017 form?
Bakshis: I’m not entirely certain where we fit in the scene, truth be told. I mentioned I’ve got two kids, and that kinda takes you out of things a bit. That said, I’ve been playing music in Chicago with dozens of bands over the last decade or so, and there’s a lot going on all over the place. Everyone I’ve met is very supportive, and there are usually quite a few opportunities on any given night to go out and meet people to play with.

TrunkSpace: What can fans expect from Belleisle in 2017?
Bakshis: We’re nearing completion of a full-length album that I’m pretty excited about. The plan is to keep promoting the “Across the Open Field” EP on the radio and in the local press as much as we can over the next several months, with some select shows we can try and plug the hell out of. Then we’ll bring out the new singles toward the end of the year in anticipation of another release in either late 2017 or early 2018.