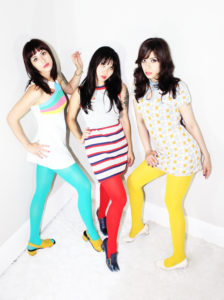 Influences: Influences range from The Ramones and Slade to Chuck Berry and 60’s Motown girl groups.

TrunkSpace: How would you describe your music?
Baby Shakes: We’re a rock ‘n’ roll punk band from New York City.

TrunkSpace: The band formed in 2005. What is the biggest lesson you’ve learned in your decade plus together?
Baby Shakes: We’ve learned so much, but probably one of the most important things is how to maintain our relationship as a band and as friends, and to respect each other. That and how to take criticism. Not everyone is going to like you but it’s important to remain unaffected by negativity and to let criticism be the fuel for your own perceived success. We’re happy with what we’re doing and we really enjoy doing it. If you’re genuine and passionate about your music it’ll come across and enough people will appreciate it and enjoy it as well.

TrunkSpace: Many people say bands are like marriages, only with more points of views involved. Baby Shakes has actually lasted longer than many marriages. What has been your secret to band longevity?
Baby Shakes: We’ve always been very diplomatic regarding every decision within the band. We realized early on when working close together that not everyone is going to agree and you can’t be sensitive about it. We consider everyone’s opinions and decide together what’s best for the band. There’s no room for egos. We also share responsibilities equally, that way no one is burdened with doing all the work on their own. Even when things get stressful or we’ve spent way too much time together, we’ve learned how make it work. Guess that’s the secret… or maybe we’re just really lucky that our different personalities balance out.

TrunkSpace: Your home base is New York City. With so much going on in the city on any given night, how does a band cut through the noise and get people out to a show? How do you engage in an era where people are more easily engaged with their cell phones?
Baby Shakes: Actually the cellphone has been a helpful tool for getting our band more exposure. When we first started we would literally split up the chore of posting flyers for our shows around record stores, clubs and on telephone poles in different neighborhoods of NY. That’s hard to do, especially without a car! It’s great that anyone can share our flyer or take a live photo or hashtag #babyshakes, then it’s instantly out there for all the world to see. We rely a lot on word of mouth and social media. Naturally, we can’t extend ourselves to every group with so much going on in this city but we try to play with diverse bands so we can reach out to different crowds. There’s a tightly knit rock ‘n’ roll scene that we’re lucky to be a part of, not just in NY but around the world. We have our usual suspects at every show too that help spread the word and we love them. They’re always in the know about everything and they create such an awesome atmosphere for us and anyone who hasn’t seen us before.

TrunkSpace: On the opposite side of that coin, what’s nice about being in New York City is that you don’t have to be as worried about overexposure. How often does Baby Shakes play out live and 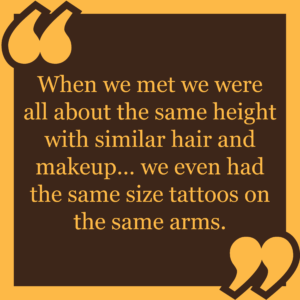 do you worry about limiting how much you put yourselves out there within a certain span of time?
Baby Shakes: We try to spread our shows apart just to keep things exciting for fans. It really depends on our tour/recording schedule, but we average about one show every 4-6 weeks locally and we try not to play more than that. We like to keep our schedule flexible so we can work on other projects like new music, music videos and anything else that might come up.

TrunkSpace: You’ve toured the US, Europe, and Japan. How are music fans in different parts of the world different, and, how are they the same? Do those in different countries react differently to Baby Shakes?
Baby Shakes: The reaction is different in every place that we play, but in general, we find that people in large cities that are more exposed to live music aren’t always as excited about seeing shows as people who live in smaller towns. Maybe because they don’t have as many bands coming to their towns. A show in the middle of nowhere, in a city you’ve never heard of can be the best show of the entire tour sometimes. Although the audiences in Tokyo and Gothenburg are always so excited and energetic. Some cities in different countries are better than others, but we really love playing in Spain, Japan and Sweden because they have similar taste in music as us and they love to dance and sing along. Puerto Rico was really fun too. We’ve been having great shows in NY since releasing our last LP in 2015 and we enjoy playing Atlanta, although we haven’t been in a few years. Can’t wait to see what the West Coast will be like, we haven’t been in so long.

TrunkSpace: We ask the question above, particularly the same portion, because music truly is a universal language. It can set a mood. It can destroy a mood. Or it can pull someone out from a particularly dark mood. What has music done for you specifically, and, does it feel like you’re paying it forward a bit by creating music of your own and sharing it with the world?
Baby Shakes: We can’t imagine a life without music just as we can’t imagine a life without words or thoughts. Being able to create and share something that people can relate to is more special to us than anything else in the world. Guess the old saying has truth to it… rock and roll saved our souls. Don’t know where we’d be without it. Life would be so bland.

TrunkSpace: The band has a look… a unified style. Was that a conscious decision, to make the look of the members part of the Baby Shakes brand?
Baby Shakes: Sometimes we wear matching outfits on purpose, but we like to think the look just evolved organically. We compare photos of each other from High School growing up in different parts of the country before we met each other and we still looked and dressed similar like we could’ve been a band together back then too. When we met we were all about the same height with similar hair and makeup… we even had the same size tattoos on the same arms. Guess it was meant to be.

TrunkSpace: What can fans expect from Baby Shakes in 2017?
Baby Shakes: Everything!! But not a new drummer. (Laughter) New record, music videos, planning some exciting shows, national/international tours and other new projects. We’re working hard and you’ll be seeing a lot of us this Spring/ Summer. For now we’re going to tour Japan in March. Locally we have some exciting shows coming up with some cool bands like Protex and Giuda. (Some secret ones too that we can’t fully disclose yet) We’ve got a new LP on the way slated for release late Spring. Burger Records will be releasing the cassette and we’re playing Burger Boogaloo this July in Oakland, CA with Buzzcocks, Guitar Wolf, NRBQ, X, Iggy Pop and a bunch of other awesome bands. Our goal is to try and venture out and play shows in some places we’ve never been like Australia or Russia. But we’re planning on touring some of our favorite cities too so… see you soon, friends!