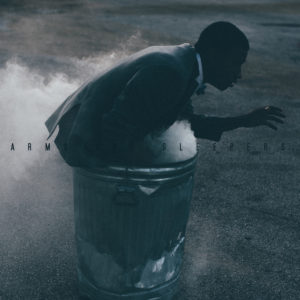 TrunkSpace: How would you describe your music?
Ramic: A healthy mix of sadness and hope.

TrunkSpace: “Life is Everywhere” is your sixth official release, though you’ve amassed some 26 albums and EPs in your 10-plus year career. As artists, creative is ever-changing, but the way in which art is created is not always different. How do you keep the process fresh, particularly after that many recordings?
Ramic: I think the process indeed remains more or less the same, and that’s quite okay because it means that the technical aspect of music-creation that is supposed to transmit our ever-changing feelings and emotions is in place and ready to fulfill its duties. So to be quite honest, I don’t think we even try to keep this technical process fresh – we are okay with the familiarity of creating art because the influences and motivation that lead us to that point are so drastically changing all the time that it would be way too confusing if everything was always chaotic (aka if we recorded new music in different ways each time).

TrunkSpace: When you’ve produced as many releases as Arms and Sleepers have, especially in such a relatively short period of time, does it mean you’re already discussing the next album while in the process of completing the current one?
Ramic: I would say yes – we’re always processing in our heads what we can do next, and how we can challenge ourselves even more. We get bored with music very easily, so we never make the same album twice. At the end of recording this last album, we already started discussing recording a more folk-inspired album next summer.

TrunkSpace: Do you experience any stress or anxiety on the eve of releasing new music? As an artist, do you concern yourself with how it will be received, both by existing fans and by those who have yet to be exposed to your music?
Ramic: I think a bit, yes. It’s natural to feel some anxiety and self-doubt when you put something so personal out in the world. After doing this for over 10 years, we’ve become accustomed to negative comments and the fact that not everyone will be satisfied. So we’ve learned to take everything with a grain of salt, but I’d be lying if I said reading a negative review/comment doesn’t affect me in some way. I just don’t lose any sleep over it.

TrunkSpace: When you look at the Arms and Sleepers body of work as a whole, from the first track to the latest track, where do you personally see the biggest evolution musically?
Ramic: That’s difficult to answer now because a natural tendency is to say the latest record. I do think our most recent album is a step in a very different direction, especially since we’ve never had actual rapping on any of our songs. I think we’ve matured a lot as musicians (I would hope so at least, after 10 years) and that’s, in my biased opinion, illustrated on ‘Life is Everywhere’. But I also think our last album. ‘Swim Team’, was a pretty big step forward. And I would say our 2009 album ‘Matador’, where we really challenged ourselves to focus on composition and instrumentation in a way we hadn’t done before. But if I had to pick one, I’d say the latest record.

TrunkSpace: Does the Arms and Sleepers genre of music make it more difficult to market an album or a tour, as opposed to say, a pop rock band? Is the process different or more focused?
Ramic: Yes, very difficult. For one, our sound is constantly changing which is not good for branding and forming a cohesive identity. Our identity has become to always surprise our listeners with a new sound, which I think is welcomed by most of our audience, but it has also meant losing some listeners. Then, the genres that we dig into are all fairly obscure, so that doesn’t help. Finally, doing all these different styles of songs live can be difficult – some people want to hear loud guitars, others more electronic sounds. We try to do a little bit of both, but someone is always bound to go home disappointed.

TrunkSpace: You were a refugee who fled Bosnia with your mother in 1992. As someone who has a voice and the ear of people willing to 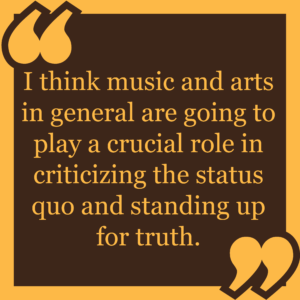 listen to that voice, do you feel it’s necessary to speak out about what is going on in this country… a country that took you and your family in and is now closing its borders to many in a similar set of circumstances?
Ramic: For sure. Lately I’ve had a lot of arguments with people, including our own listeners, about the connection between arts and politics. Some folks feel like music should stay out of politics, which I completely disagree with and don’t understand at all. For us, it’s not so much politics per se, but the world and society in which we live. If in that place there is injustice, whether it’s related to politics or not, we as artists—but most importantly as human beings—have a moral obligation to address it. And if we have a moral obligation as human beings to address injustice, then naturally that’s going to influence our art. If it doesn’t, then we’re being dishonest with ourselves. The connection between the matters of the world and art is very obvious to me – just like a movie or a conversation with someone or a country might influence our music, so might what we see happening in front of our eyes. And in front of our eyes right now, we see some incredibly negative things happening in the US and elsewhere, which we absolutely feel like we need to mention through our platform, which is art.

And specifically with regard to immigration, it hits very close to my heart. I posted something on my Facebook page recently which I want to share here because it’s directly related to your question:

“I arrived to JFK airport a little over 20 years ago as a Muslim refugee. Seeing the news of what’s going on there right now is absolutely sickening. To the folks claiming that music should be detached from politics and social issues, wake the fuck up – there ain’t gonna be no music or independent culture when the human rights of fellow human beings are taken away. Arts are about humanity and truth, and this is our time to stand up for precisely that. Follow this logic – if I was turned away from America in 1996 as people are being turned away right now, Arms and Sleepers would never fucking exist and the music we’ve created over the last 10 years would simply not be there. We must hold on to our moral compass, no matter what. If there is one lesson I learned fleeing war as a kid and seeing adults turn into complete savages, it’s that.”

So yeah, I do feel like I have an obligation to say something because those of us that have experienced the process of being refugees, immigrating to far-away countries, and assimilating to new cultures, we need to speak up against stereotypes and generalizations.

TrunkSpace: At the same time, does it fill you with hope to see the thousands of people showing up in protest at airports and in cities around the country?
Ramic: It does, though I worry about protest-fatigue, especially since this is happening within the first two weeks of Trump’s presidency. But it does feel good to see people reject what they feel is morally wrong and make the effort to go out into the streets to exercise their right to protest. Unfortunately I am out of the country at the moment, but I look forward to joining in when I return home in a few weeks.

TrunkSpace: While the world seems more divided politically than ever before, music remains one of the things that can bridge the gap between different types of people with different types of views. Two people could be standing next to each other at an Arms and Sleepers show and share nothing in common other than a love for music. In your view, as someone who found music and now has made it a career, how important is music? We know that’s a big, loaded question in a lot of ways, but as protesters sing in unison in the streets and at airports, it seems more important than ever.
Ramic: I think music and arts in general are going to play a crucial role in criticizing the status quo and standing up for truth. I think that’s always been the case throughout history, and I think that needs to continue to be the case. Artists simply cannot turn a blind eye to the injustices, scapegoating, and lack of empathy that seem to be penetrating the moral fabric of our society. I often talk about current issues at my shows, and not everyone wants to hear that. But I insist on it, because it matters to me and playing through a show without saying anything just seems empty and dishonest. Of course, standing up for what you believe in is not a walk in the park – I fully anticipate criticism, arguments, and Facebook “unlikes”. And that’s already been happening. But we have to live in truth ourselves or otherwise history will continue to repeat itself. And history repeating itself is fucking scary – I’ve already been thrown out of a country because of my religious and ethnic background, and I don’t intend on making that a tradition.

TrunkSpace: What can fans expect from Arms and Sleepers in 2017?
Ramic: Probably not post-rock, but definitely lots more music.