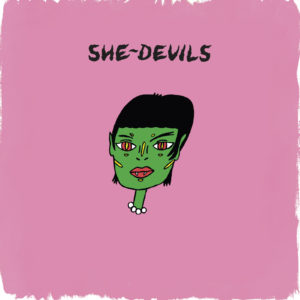 If the devil is in the details then the details themselves are in the She-Devils. At least in their music, which goes well beyond the piecing together of a creative puzzle to also include an almost mathematical formula. The Montreal duo, whose sound is a hypnotic trip through a small town fun house that you want to continuously ride, are set to release their self-titled debut on May 19th.

We recently sat down with Audrey Ann Boucher and Kyle Jukka to discuss how their vision came together, sampling their own music, and where they hope their devilish details take them.

TrunkSpace: You guys met while you were both living in a sort of jam space. How quickly did you guys find that creative connection amongst yourselves?
Boucher: It took me a couple of years.
Jukka: Yeah. For a while we weren’t necessarily doing anything except for occasionally jamming together.
Boucher: Yeah. It took a bit of time before we could kind of understand what our strengths were and what we could bring to each other.
Jukka: And also just sort of feeling motivated to do something, kind of…
Boucher: More serious.
Jukka: Yeah.

TrunkSpace: So what did that path to where you are today look like? What was it that ultimately led to She-Devils?
Boucher: I guess when we started using samples. I think that really helped. Especially, in the beginning, we were using samples from 50s and 60s songs and for me… because I had listened to so much of that music… it felt extremely natural for me to just start singing in that kind of palette. That definitely really helped me. I guess in the past when we tried to jam, I’d just completely freeze and I couldn’t sing at all. I couldn’t even talk or anything because I would be way too shy. I kind of got over that and was able to do stuff on my own too instead of in front of Kyle.

TrunkSpace: So when you started to tap into that 50s and 60s sound, was it difficult to use that music to not only play off the sounds of the past, but at the same time, make it all sound modern?
Jukka: It’s not really like retro music completely. It’s not like we’re recreating that sound. I think, at least for me, the way I put sound together… before doing this I made music that didn’t really sound as inspired by 50s and 60s stuff, but I kind of just have my own algorithm in terms of how I piece sound together and how I work on sound. So I guess it’s now just about feeding that fabric into the way that I work on music, so it just kind of gives it a more modern context pretty intrinsically.

TrunkSpace: You mentioned the algorithm. It does seem like there is a mathematical side to music that people often don’t consider or completely overlook. 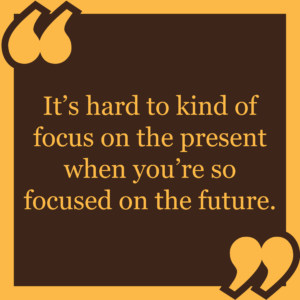 TrunkSpace: Do think that mathematical side of things applies more so to what She-Devils is doing compared to some other bands out there today? Instead of just using the creative side of the brain to write songs, do you tap into the analytical side as well?
Jukka: Yeah. There are places where it’s more upon your imagination and there are aspects of sort of creating music that’s a bit more, at least where I subscribe to, of kind of a vision of where you sort of manufacture it. You just kind of get into a pattern.

TrunkSpace: There’s always stumbling blocks with any creative endeavor. What was the biggest stumbling block for She-Devils in terms of bringing it all together and getting ready to release your self-titled debut?
Boucher: I guess we were trying to get out of the sample world. For a second there, it was kind of scary. It was like, “Oh… what do we do?”
Jukka: Yeah.
Boucher: Then once we got into the studio, it felt like we could just do that… we could still record instruments, but then still apply that kind of samply feeling by just looping the instruments rather than recording a full track.
Jukka: And also the guy we recorded with kind of specializes in recording gear pre-1975, so just the way he records… it just kind of all came out sounding a bit from that era texturally.

TrunkSpace: So it sounds like you guys kind of started sampling yourselves?
Boucher: Yeah.
Jukka: Exactly!

TrunkSpace: Was that a daunting process when you got started… knowing that it all sort of fell on your shoulders?
Jukka: I think once we got going, it actually was just really fun and creative.
Boucher: Yeah.

TrunkSpace: Has it altered the way you guys do things in a live setting now as opposed to when you were starting out sampling mostly other artists?
Jukka: I guess so, yeah, because now instead… it just gives me more freedom. I can sample even more and peel more parts away and sample just the bass or just the guitar and just have more ability to layer things differently.

TrunkSpace: So as you’re gearing up to release the album, do you feel any pressure either creatively or from a standpoint of your own expectations of how you’d like it to be received?
Boucher: Yeah, I guess. I’d say we’re both that way, but we’re already kind of thinking about the next thing. It’s hard to kind of focus on the present when you’re so focused on the future. I think that’s just a bad habit that we need to break out of.
Jukka: I wouldn’t consider that a bad habit. I think it’s pretty natural.

TrunkSpace: It’s certainly difficult for creative people to spend so much time on one creative endeavor and then expect them to continue to focus on it once it’s finished. As creators, you create… not necessarily nurture after the item is created.
Boucher: Totally.
Jukka: And there’s something kind of nice about that because it means you’ve worked on something and you’re really engaged with it at the time that you’re working on it, but then after you’re done with it… you have new goals. You can kind of just release it into the world and it feels kind of casual.
Boucher: Yeah. True.
Jukka: You’re not necessarily feeling like super precious about it because it’s something you’ve already made.

TrunkSpace: So where do you find yourselves drawing that new inspiration from these days?
Boucher: Well, when we wrote the first songs I was really into Annette Funicello and Brigitte Bardot and now I’m more into dirtier rock like The Cramps. Something that’s just a bit more mean.

TrunkSpace: Does it ever hit you that while you’re finding your own inspiration in places, somebody somewhere may be finding inspiration in the music that you’re creating?
Jukka: I think that would just be ideal. It means you’ve done something that fulfills it’s purpose in a sense. It almost doesn’t really matter if you sell records or if the critics like what you do, what’s most important is that it in some way gives back into that cycle of inspiration.

TrunkSpace: So as you’re putting the album out into the world and creatively putting it behind you and as you look towards the future, what’s on the band’s bucket list? What do you hope to accomplish?
Jukka: I personally just want to make better and better albums and hopefully be able to get a little more money to make them and work on the sounds more. I’m really sort of like a sonic head. I really like a lot of music that’s been engineered, so I’m really into that side of things… just working something.
Boucher: I’m definitely really into the other aspect of the project, which is kind of the branding. I’m excited to just get better at making music videos and just seeing how my art evolves with time as well.

She-Devils arrives on May 19th via Secretly Canadian.