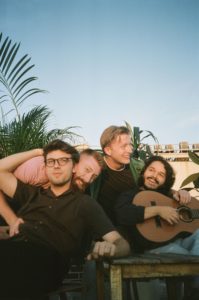 New York, the city so nice they named it twice, has inspired many artists over the years, but for indie rockers and recent Arkansas transplants Brother Moses, the Big Apple served as the culture shocked-springboard for their latest album, the beautifully-crafted masterpiece of chill, Destination Pop.

“You can hear the struggle but you can hear also the excitement and the persistence of it,” said guitarist John-Lewis Anderson in an exclusive interview with TrunkSpace.

The band’s latest single, “What Does It Take?”, is available now.

We recently sat down with Anderson and guitarist Moses Gomez to discuss the pop of pop culture, getting Goldblum, and why the album is a perfect combination of their past and present.

TrunkSpace: The new album, Desperation Pop, drops on March 6. What is the period leading up to a release like for the band? Are you in a bit of a creative lull?
Anderson: We have definitely not been in a lull. It’s been a very crazy period. We are just getting everything ready for the rollout and we’ll have one more single coming out before the album drops. So yeah, we’re keeping pretty busy.
Gomez: I would say that, as far as music-wise, each one of us has things cooking. But creatively though, we’re taking up a lot of space with different ideas for ways that we can present the album.

TrunkSpace: What could someone learn about the band as a whole in sitting down to listen to Desperation Pop front to back?
Anderson: Well, I think it’s a very New York-centric album. We moved up here about two years ago now and I think you hear a lot of that in the music. You have a song like “What Does It Take” that just focuses a lot on the things that you have to do to not just survive but to try to do something special out here. There are a lot of little things like that, which I think you hear. You can hear the struggle but you can hear also the excitement and the persistence of it.

TrunkSpace: So would you say that the city itself, New York City, was one of the biggest influences on the album?
Anderson: Yeah, I think that’d be accurate.

TrunkSpace: One of the other things we noticed was the connection to pop culture that was present. Is that a conscious decision when it comes to writing or is it more of an influence by osmosis thing? 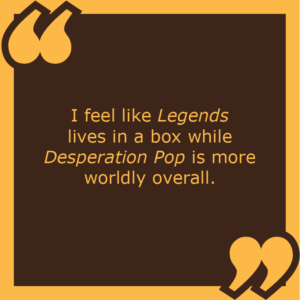 Gomez: I mean, I think it’s definitely a little bit of both. I think it just happens to go with what is happening at that time in our lives – where and what we’re into at that time. The lead singer, James, just for an example, in Sam & Diane, he wrote about that show because there was a time where we stayed up and we’d just sit there on the couch watching Cheers over and over again. And so it definitely has to do with a little bit about what’s going on in our lives and then we’re pulling from other places just to fit the specific tone of the song.

TrunkSpace: But… even Jeff Goldblum appears?
Anderson: (Laughter) Yeah, that’s something that we’ve been sitting on for a while. When we recorded our EP, Legends, we are out in Los Angeles, and he had a residency at this jazz club. And so we went to see him one night and it was a really cool experience. Afterwards he was just kinda walking around, talking to some of the audience, and we went up to him and we just kind of told him what we were doing there and asked him if he would be interested in saying a few words for the EP. Well, we happened to be on a small label at the time and they kind of got freaked out by that and didn’t want us to put it on there. So, we were just kind of waiting for the right time. We knew that was something fun and special and we felt like it really went hand in hand with what we were trying to do here.

TrunkSpace: You mentioned your EP, which leads us to our next question. No one knows your music better than you, so where do you hear the biggest differences between Legends and where you are now creatively with Desperation Pop?
Gomez: Creatively, I think we’re at our highest point yet. I think we’ve just gone so far into not limiting ourselves on what we can do. I think what we’ve tried on Desperation Pop, we would have never thought to do any of that stuff on Legends. I feel like Legends lives in a box while Desperation Pop is more worldly overall.
Anderson: And I think thematically, on Legends, you would hear a lot of us striving for kind of the more pop influence – bright sound. And then, with Magnolia, we kind of dove into the more desperate side of things and a kind of raw energy. I feel like we’ve really been able to meld them and bring them together with this new record. 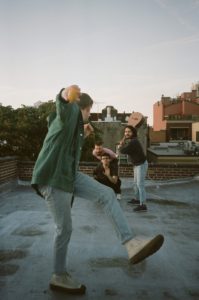 TrunkSpace: There’s also a great production quality to Desperation Pop. How does that carry over into a live setting in terms of what you’re able to do with those songs on stage?
Anderson: That’s a good question.
Gomez: Yeah, and that is a good question.
Anderson: It’s a constantly evolving process, but I think the main difference you’d hear is there is so much energy when you come to a Brother Moses show and each one is a little bit different. We like to feed off of the crowd and try to make it a special experience. But I think the main thing you’re going to see is so much energy and excitement. We also try push ourselves to have all these interesting sounds and create just a sonically rich atmosphere for that energy to live in.

TrunkSpace: What are you most proud of with the album?
Anderson: Ooh, that’s a tough one. Oh man. Moses, do you have anything that pops out immediately?
Gomez: I think the sound, specifically, I think the record sounds better than anything that we’ve ever done before. What helps that is the specific composition or the specific arrangement that we landed on with these songs. I think that’s what I’m most proud of, is just how they specifically sound whenever it’s coming out of your car speakers or wherever.
Anderson: I already kind of touched on it before, but I think we were able to get a balance of emotional impact with a polished product that we’ve been trying to make for a while. A lot of these songs we ended up reworking several times and even rerecording, and when I listen to it I’m just really, really proud that we were able to do that and have that patience for it because I think it really, really paid off.