The pandemic that has served to lock most of us indoors is a global issue that we’re all facing, and while some of us are handling the new normal better than others, creatives like singer-songwriter Glenn Thomas have found themselves more musically-prolific than usual.

“It’s funny, I’ve been more productive during this lockdown than I usually would be,” he said in an exclusive interview with TrunkSpace. “I guess that makes sense – you’re sort of forced to face your time without life’s usual distractions.”

For those of us who absorb the creative works of others, we’re in luck, because Thomas’ debut album, Reassure Me There’s A Window, drops this Friday.

We recently sat down with Thomas to discuss promoting an album during a worldwide health scare, breaking out from the comfort of a band, and dreaming beyond talent shows.

TrunkSpace: Your new album, Reassure Me There’s A Window, is set to drop on May 15. What kind of emotions do you juggle with when releasing new material into the world, and is the experience different this time around given that the entire world, essentially, is under some version of quarantine?
Thomas: I think regardless of the quarantine, releasing a new album is a mostly exciting but certainly terrifying venture. Here is a body of work you poured a lot of yourself into, from the personal revelation of songs and the time and money spent actually making the record. Add in the months of planning and you have a big sense of relief and accomplishment. The uncertainty comes in with regards to how people will react to it. Will they like it? Will it reach listeners or fall on deaf ears? I think as an artist you write songs for yourself, and you record songs for other people. The only difference now is people are home, and listening to more music.

TrunkSpace: Normally you would tour to support a new record release, but that is not something that is possible right now. How has – or will – promoting the album change? How do you get the word out when people can’t get out? 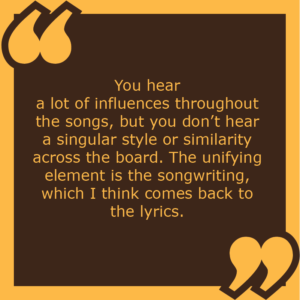 Thomas: I was really looking forward to the full band release show at The 5 Spot in Nashville, and the following tour, but of course those are canceled. The show goes on as they say, and I’ll be able to perform the album and talk to the virtual audiences with live streams. I enjoy doing live stream shows – they are intimate, and feel close, even though the audience isn’t visible, you have real-time comments and interaction. In terms of promoting, you aren’t going to geographically get in front of new audiences like a tour would, so the focus on selling tickets in a given region turns to, “How can I get more people to listen to this album around the country and internationally.”

TrunkSpace: As we understand it, the album sort of grew out of a batch of songs that you had written, but that didn’t necessarily fit the vibe of your band, Wild Sun. What was the process like for you, stepping out from the band and being able to take full creative destiny over the album? Was it exhilarating? Terrifying? A combination of the two?
Thomas: It was honestly exhilarating. I love playing with a band and likely always will need that outlet, but there’s something about giving more personal songs a completely different type of attention. This process was about giving each song the best possible sound for each song, rather than shaping songs around the band’s sound. Also, my biggest focus is usually writing lyrics. It’s a lot easier to get lyrics across clearly with acoustic-based music than it is where you are semi-shouting in front of an alt-rock power trio.

TrunkSpace: If someone sat down to listen to Reassure Me There’s A Window front to back, what would they learn about you both as an artist and as a person?
Thomas: The first thing they’d say is probably, “Gee, this guy is in his own head too much,” or “I need a tissue.” (Laughter) I think – and this is based on the reactions largely so far – people take away what was put into the songs, which is a careful approach to both the lyrics and the music. You hear a lot of influences throughout the songs, but you don’t hear a singular style or similarity across the board. The unifying element is the songwriting, which I think comes back to the lyrics.

TrunkSpace: We love a good lyric here… the kind that makes us curse that we didn’t come up with it ourselves. What’s a favorite line or snippet from Reassure Me There’s A Window that you’re particularly proud of and why?
Thomas: It’s hard to pick one line or song, because they are all so personally reflective, so here’s a few. In “All You Can Do,” I’m proud of the line, “Prayers will be said, but they work too slow when you have to fix the things that someone else broke.”

One song on the album that is entirely lyrically-driven is “There’s Not A Thing,” which imagines a phone conversation with an ex whom you haven’t spoken to in years. I really like the line: “Does that hydrangea bush still tower over you? Do you still still see that old ghost in the yard? When you called me up I did not know where to begin — I figured that was a good place to start.” To me if you are imagining that scenario and conversation, where do you even begin?

If I’m picking a sad lyric it would be, “I used to be a dreamer that no alarm could wake, now I’m facing facts that I don’t want to face,” in “When You Are Gone.” 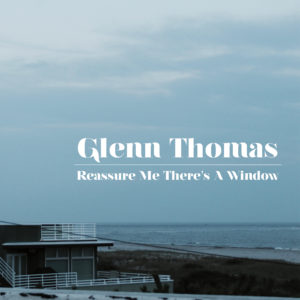 TrunkSpace: We have all been in lockdown. How much of your time spent social distancing has also been spent creating? Have you experienced a creative jolt during this period – and will it lead to another album?
Thomas: It’s funny, I’ve been more productive during this lockdown than I usually would be. I guess that makes sense – you’re sort of forced to face your time without life’s usual distractions. I’ve been writing a lot of instrumental songs without lyrics, partially because it is a fun mindset to be in and a different way of thinking, but I also don’t really want to complete songs that I wind up becoming more attached to than this album before this album is even released!

TrunkSpace: Where are you hardest on yourself as an artist and how do you overcome those self-critical insecurities?
Thomas: I think I’m pretty hard on myself in the sense of always trying to write a better song than the last one. It’s a good benchmark to have, but there are also songs I’ve written that I look at and wonder how I even came up with it at the time and there’s no point trying to best it. So I think I partially overcome it by looking at songs I love to listen to by other artists. Not all of them are life-changing, amazing songs… in fact, most of them are just plain fun to listen to. If you can complete a song and it’s fun to play and sing, and some people resonate with it – hey that’s great and an honest day’s work in my book.

TrunkSpace: If you sat down with your 10-year-old self and gave him a glimpse of his future, would he be surprised by where his musical journey has taken him thus far?
Thomas: When I was 10 I was playing the drums along to songs on my boombox, imagining myself in my school’s auditorium stage during a talent show or something. I thought if I could play on the same stage we have assemblies on, in front of my friends, I would hit my dreams. So if that same kid were to see where I am at now, the stages I’ve played, the experiences I’ve had and this path I have followed… well I’d hope that kid could take a shock well or at least be wearing a diaper.

TrunkSpace: Time machine question. If you could jump ahead 10 years and get a glimpse of what your career looks like a decade from now, would you take that journey? If not, why?
Thomas: No, definitely not. Life and pursuits are about the journey for me. There is no singular apex of achievement that eclipses the sum of all the little things that went into it. Say I sold out a huge venue and had the best show of my life. What happens the next day? If you’re doing this or living for those momentous, massive highlights, what’s the point of the day to day and the process of it all? If I could see the future it would reframe how I approach living.

Reassure Me There’s A Window is available May 15.