Edibles for the ears?

That’s what Kyle Forester hopes people will discover when sitting down to listen to his latest album Hearts in Gardens when it’s released on February 21.

“I hope they’d have at least a few moments on the album where they’d hear an instrument play something and they’d be, like, ‘Ooh, tasty playing,’” he said in an exclusive interview with TrunkSpace.

We recently sat down with Forester to discuss vulnerable explorations, album to album growth, and why he’d like to find himself an outlet other than music.

TrunkSpace: Your new album, Hearts in Gardens, drops February 21. What kind of emotions do you juggle with as you gear up to release new music to the masses?
Forester: Ha, well, I’m not positive this music is gonna reach the MASSES, but I’m excited for people who like this kinda music to hear it. It’s always a bit vulnerable to put your stuff out there, so there’s a little bit of that kind of nervousness, but, yeah, mostly just excited, relieved to have made it to this point, that kinda thing.

TrunkSpace: Are you someone who has a hard time letting go of what you create? Can it be difficult putting so much of yourself into something and then leaving it up to the universe to decide how it is perceived and accepted?
Forester: Hmmm, not really? I actually prefer to work kinda quickly, once I have the ideas together. I’m not someone who, for instance, goes back and forth forever in the mixing process. I have a few people whose opinions I trust who I’ll play things for and if no one says it’s terrible I’m pretty much ready to let go of it.

TrunkSpace: Hearts in Gardens is your second solo album. No one is closer to the music than you, so we wonder what you view as the biggest differences – both thematically and sonically – when lined up against your 2016 self-titled debut? 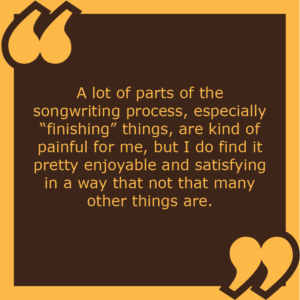 Forester: Kind of a lot! The songs on the first album go back to some really old ideas. It’s also mostly stuff I worked on at home with no idea of what form it would eventually take, and I sorta pieced it together from home recordings and stuff I did at a friend’s studio, etc. This one was written with the band I play with now in mind and recorded in a nice studio with the band playing. And, yeah, thematically, I don’t know if my lyric writing has changed so so much, but my life is way different than it was four years ago, so I’m sure there’s some different themes in there!

TrunkSpace: If someone sat down to listen to Hearts in Gardens front to back, what would they learn about you both as an artist and as a person?
Forester: I hope they’d have at least a few moments on the album where they’d hear an instrument play something and they’d be, like, “Ooh, tasty playing!” And I guess I hope my singing makes me sound like a nice and mellow guy to hang out with?

TrunkSpace: What are you most proud of with the new album?
Forester: Well, I guess, back to the last answer, I think it’s a nice album musically, there’s some good playing on there.

TrunkSpace: What is your main objective as a songwriter? Is your creative output for you? Is it for us, the listener? Is it for a combination of the two?
Forester: I always just say I try to make the kind of music I like to listen to and that I wish there were at least a little more of in the world? A lot of parts of the songwriting process, especially “finishing” things, are kind of painful for me, but I do find it pretty enjoyable and satisfying in a way that not that many other things are.

TrunkSpace: Can you envision a day where music is not a part of your life? If you weren’t writing, would you need another outlet to find an internal balance within yourself?
Forester: I always sort of fantasize about having a totally different path at some point in my life and getting really involved with something other than music, but that seems unlikely at this point, and it’s probably true that I like playing music more than just about anything else. And, yeah, I would need something for internal balance cause I am a wreck.

TrunkSpace: Over the course of your songwriting career, have you written songs that you weren’t particularly happy with at the outset, only to end up learning to appreciate them more later down the road?
Forester: Yeah, totally. “Strange Vision” on the new album is probably the best recent example of something I wrote that ended up, you know, exceeding my expectations.

TrunkSpace: If you sat down with your 10-year-old self and gave him a glimpse of his future, would he be surprised by where his musical journey has taken him thus far?
Forester: Ha, I would! I was already pretty into music at that age, but I don’t think I had any idea what kind of life you could lead revolving around it. At that age, I believe my ambition was to be a sports writer for the Bergen Record newspaper.

TrunkSpace: Time machine question. If you could jump ahead 10 years and get a glimpse of what your career looks like a decade from now, would you take that journey? If not, why?
Forester: In the words of Doc Brown, knowledge of the future can be very dangerous, Marty, you must not tell me anything!

Hearts in Gardens is available February 21.