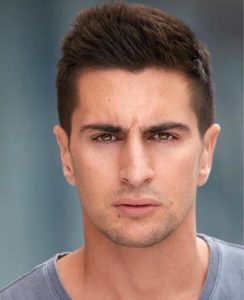 This week we’re taking an extended look at the new movie “Glass Jaw,” chatting with the creative minds responsible for bringing the gritty drama to life. Arriving in select theaters and on digital HD today, the film is a story of redemption set in the world of boxing and stars Lee Kholafai, Korrina Rico, Jon Gries, Mark Rolston, Jaime Camil, Malcolm David Kelley, Vernon Wells and Steven Williams.

Next up we’re chatting with Lee Kholafai to discuss the seven year journey he made to ensure that the film become a reality, why it takes teamwork to make the dream work, and the reason you can’t have a glass jaw in Hollywood.

TrunkSpace: From what we have read, you stared down a lot of obstacles in order to see “Glass Jaw” become a reality. How big of an accomplishment was it to call wrap on the film and how much of your life have you invested in it from conception to completion?
Kholafai: Oh man, if you only knew. Making a film is harder than I ever imagined. I’ve easily invested seven years of my life into “Glass Jaw,” if not more. I am still working on “Glass Jaw” even, so who knows what the total number might be. (Laughter)

First of all, writing it took a while. Each time, I thought we had a final copy, we would receive notes – even notes received the day before shooting. (Laughter) Then there was the task of raising money. I hate asking for money honestly, so that was really hard. Then dealing with lawyers, another learning step there as well. Then pre-production was a monster. Then production I was so mentally and physically exhausted, that I don’t think I slept at all. My mind was in a million places, which is the one thing I regret. I wish I could have just shown up on set as an actor but I had a lot of responsibility since I was the hub of information and if anything went wrong, the fingers would point at me so the pressure was on. Not to mention we ran out of money a couple of times during production. I never told anyone but I was literally raising funds for the film while shooting. Long story short, I ended up getting a lot of credit cards and maxing them all out. Then came the post, which was more complex than I imagined. VFX was a beast that we had no idea about. Then came selling the film. Everyone thought “Glass Jaw” was too commercial for the festivals so we had to deal with that and now we are in the marketing stages, which is pretty fun.

So yeah, a lot of long nights and early mornings with the belief that one day it would all make sense.

TrunkSpace: We would imagine there are a lot of parallels between boxing and filmmaking, especially on the “never give up” front. How much of seeing your dream become a reality has been a bare-knuckle, take-no-prisoners brawl, at least from an emotional standpoint?
Kholafai: Great question. It’s every similar, honestly. First of all, everyone doubts you. Secondly, you can’t take no for an answer and literally have to fight your way through every obstacle and stand up right away if anyone puts you down. I really love the quote, “Winners never quit, quitters never win.” That quote alone helped me because I thought, “How could I lose if I never give up?” Consistency, focus, and action is how, 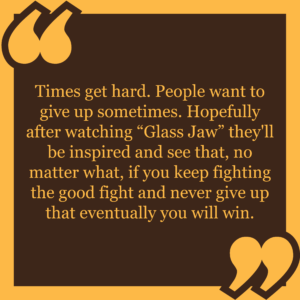 honestly, “Glass Jaw” was made. Also respecting the team. There are so many components to “Glass Jaw” and I am more than honored to have the great team that we had. Teamwork for the dream work, baby!

TrunkSpace: There is a rich history of inspirational sports stories that have found their way to film. What makes “Glass Jaw” unique, but at the same time, still delivers on that inspirational vibe that will make us all want to go down into the basement and hit the dusty, old punching bag a few rounds?
Kholafai: Well, the story of “Glass Jaw” is simply to never give up. Times get hard. People want to give up sometimes. Hopefully after watching “Glass Jaw” they’ll be inspired and see that, no matter what, if you keep fighting the good fight and never give up that eventually you will win.

TrunkSpace: Beyond starring in the film, you also wrote and produced. Was the experience of wearing so many hats a bit like a high where, there’s ups and downs, and when it wears off, you instantly want to go out and do it again – in this case, run out and make another film?
Kholafai: That was honestly the hardest part. My head was in so many places from wearing so many hats. I wish I could have just shown up as actor and focused on my scenes. As I mentioned before, we ran out of money a couple times, so that was stressful not knowing how I would be able to afford the next day or be shut down. We had locations cancel on us last minute and also I was the mediator for everyone to make sure everyone got along, and so on. It was so mentally exhausting and I didn’t sleep at all. The responsibility was heavy because if anything went wrong, I was the one to blame. I don’t ever want to wear that many hats again. I did it because of budget constraints, but I learned my lesson. I am thankful for the learning process I have now though because I can’t be taken advantage of due to my experience from doing it. The dream scenario would be able to create content, get a good team together, and have enough money in the budget where I can just show up as an actor and focus on my scenes for the day rather than everything else that could go wrong that a producer has to deal with.

TrunkSpace: Did producer Lee and actor Lee ever butt heads in terms of what one knew was possible to accomplish and what one hoped was possible to accomplish? How do you find the middle ground between the creative wants and the day-to-day needs?
Kholafai: Honestly, they were both on the same page. I am a dreamer and I go for the stars always. I will say this, “Glass Jaw” turned out better than I ever imagined. It all started with this crazy idea of wanting to make a movie and, seeing it done and a reality is still unbelievable to me. It still probably will not really hit me until it hits theaters on October 26th. I will say, I was realistic in an indie budget. I knew I didn’t have the money to do transformers, etc., so I tried to make the script as relatable and real as possible.

TrunkSpace: What are you most proud of with the film?
Kholafai: To be honest, the team we had come on board that gave “Glass Jaw” their best. I am also forever thankful to our investors because without them “Glass Jaw” would still just be an idea in my head.

TrunkSpace: Do you have a personal history/tie to the sport of boxing? Was there a personal interest/investment in the story itself?
Kholafai: I love boxing but I don’t have much of a history with it professionally. I still box often and it does wonders as my stress relief on frustrating days. I learned to respect boxing more as well because honestly, it’s a very disciplined sport. The stamina you have to have is insane. Also there is something awesome about being in a ring and seeing what you are made of. I’ve never fought professionally but I think a real fight would be cool to do one day.

TrunkSpace: You started your career as a model. Was it difficult to transition into the world of acting and convince people that you were an actor and not “a model who wants to be an actor?”
Kholafai: That’s another hard part. People don’t really take models seriously. I know people will use it against me but I suppose I just will have to keep proving myself and pushing forward.

TrunkSpace: When it comes to being an actor in this day and age, what’s more difficult – is it finding that first big break or maintaining a career that is built on longevity?
Kholafai: I think both can be difficult. Maybe the big break since it’s more sought after as difficulty goes. But you can get your big break and have not much happen after and you can have longevity but not the career you hoped for. I really respect Stallone’s career. He has the best of both worlds. He makes hit movies and has been around longer than most.

TrunkSpace: We know this is a super general question, but what’s next? What’s that next creative high you’re going to chase?
Kholafai: I thought you would never ask! (Laughter) I am actually working on a film called “Greed” now. We are perfecting the script and then will start production soon. Its message is that as fast you make it, you can lose it. So don’t be cocky, or arrogant. Always be thankful and help others.

If you haven’t noticed, I want to make films that deliver a good message and hopefully help society in some sort of way.