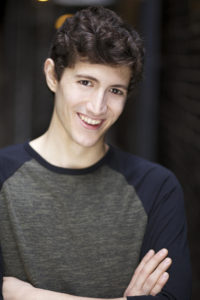 TrunkSpace: When did you know that you wanted to act for a living?
Esposito: I’ve always loved performing, but being an actor for a living had always felt like some intangible concept to me. I was in the 11th grade doing a production of “The Importance of Being Earnest,” and it finally clicked with me that I’ve been an entertainer my whole life, and there’s nothing else that I’d rather be doing. I saw a poster for The American Academy of Dramatic Arts hanging up in the music wing, and it really drove home for me that pursuing acting could be something very well within my reach and not just some impossible fantasy. It was the only school I auditioned for, and I got accepted. I’ve been a waiter ever since.

TrunkSpace: Was there a particular performance or actor/actress from your childhood that you remember being drawn to and inspired by?
Esposito: Julia Louis-Dreyfus in “Seinfeld” and Robin Williams in literally anything. They’re both comedy gold.

TrunkSpace: How did you decide to approach your career as an actor? Did you formulate a plan of how you wanted to attack what is known for being a hard industry to crack?
Esposito: I had a loose idea of how I needed to approach the industry based on what they taught us in school, but so much of my experience has been trial and error and figuring it out as I go. I feel like the industry is constantly evolving, and you just kind of have to roll with the punches and evolve with it.

TrunkSpace: When did you decide to move away from your home and pursue acting as a career? How old were you at the time?
Esposito: I was 18 when I went to school in New York, and I’ve been living away from home ever since.

TrunkSpace: Was that move an easy transition for you initially? How long did it take you to feel at home and find a good support group of friends and peers?
Esposito: I’ve been very lucky in this regard. On top of being just a train ride away from my family, I’ve always been surrounded by a strong community of actors and friends here in the city. Between my fellow alumni, my Stardust family, and the company members of Theatre 68, I’ve never had to deal with any of the craziness of New York City by myself.

TrunkSpace: What has been been your biggest break in terms of a particular role or project thus far?
Esposito: Last year I worked on “Girl on the Train.” I had no lines and I’m barely in it, but I got to blow weed smoke in Emily Blunt’s face for like four days, and personally, I think that’s worth more than an IMDb credit.

TrunkSpace: Is there a specific type of role you’d like to take on or a specific genre that you feel more at home in?
Esposito: The types of roles I’m most comfortable playing are pretty opposite on the spectrum. I’m either the goofball comedic relief or the disturbed teenager with possible mental health issues 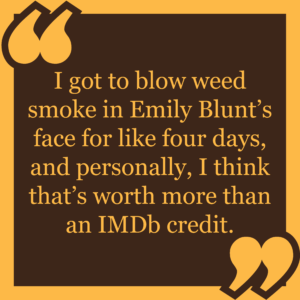 that tries to kill his mother.

TrunkSpace: What would you say is the greatest strength an actor/actress can have outside of acting ability itself?
Esposito: Perseverance and a sense of humor.

TrunkSpace: What is your ultimate dream when it comes to your acting career? Where would you like your path to lead?
Esposito: To the point where I can eventually retire feeling like I shared with the world everything I wanted to share and have nothing left to give. Also, I want to play opposite Kate McKinnon on SNL.

TrunkSpace: What advice would you give another young aspiring actor/actress who is considering moving away from home to pursue their dream?
Esposito: Do it. Do it and give it your all. Even if you fail miserably, wind up broke, and have to move back home, you’ll never have to look back when you’re old and think, “what if?”

TrunkSpace: Where can people (and casting directors) learn more about you?
Esposito: To find out what I’ve been up to acting-wise, check out itsbrianesposito.com. For shameless selfies and pictures of my hamster, follow me on Instagram! @hashtagbrianesposito