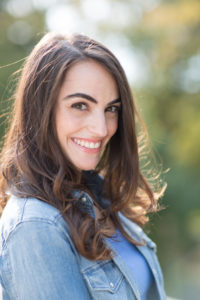 TrunkSpace: When did you know that you wanted to act for a living?
Berenbaum: I remember telling people as a kid that I wanted to be an actress when I grew up. I liked putting on shows with my cousins and making people around me laugh, but I was also a super shy, realistic child and somehow knew how crazy and difficult a career in acting was to pursue. Later on I realized that I was correct in feeling that way but was also ok with letting my passion outweigh my fear. I studied drama at LaGuardia High School of the Performing Arts in NYC but it wasn’t until I was working in fashion PR that I realized I needed to give acting a real shot. I felt like a fraud doing something that I wasn’t committed to 100 percent so I decided to take the leap.

TrunkSpace: Was there a particular performance or actor/actress from your childhood that you remember being drawn to and inspired by?
Berenbaum: Absolutely. “Wizard of Oz” for one. The world they created in that film was so enchanting and the characters so full of heart. I wore ruby red slippers for 3 years after seeing it for the first time. I truly believed if I clicked my shoes together 3 times I could always go home, ya know? I was also really inspired by all of the Abbott and Costello movies. Everything about those comedic geniuses: their dynamic, their reactions, their characterization. They kept me laughing nonstop and I felt like if I could do that for other people, I would be the happiest girl alive. Their style of humor is timeless.

TrunkSpace: How did you decide to approach your career as an actor? Did you formulate a plan of how you wanted to attack what is known for being a hard industry to crack?
Berenbaum: To be honest, I’m still trying to figure it all out, but when I first started out, I wanted to get back to the basics. I signed up for class and have been studying ever since. I think it’s really important to have technique to work with and adding different ones to my “tool belt” through studying with my incredible teachers has been invaluable. Another plan of action was to do as much as I could to a.) create a reel, which led to a few student films, and b.) become more comfortable, which led to theater as well. I’ve recently started working with representation, which has been really awesome. Ya know, it’s so easy to get frustrated with the journey, but the journey is the gold. I feel like everything I learn is only bettering me as an actress and a human and allowing me to feel more prepared and open for what’s to come.

TrunkSpace: When did you decide to move away from your home and pursue acting as a career? How old were you at the time?
Berenbaum: I luckily didn’t have to move anywhere. I’m not opposed to some time in LA though.

TrunkSpace: Was that move an easy transition for you initially? How long did it take you to feel at home and find a good support group of friends and peers?
Berenbaum: Since I didn’t move anywhere, I’m going to look at “that move” as my decision to pursue acting which felt right. It was a complete change in lifestyle, but I like to think of the bigger picture: a longterm career. I’ve felt I’ve been lucky enough to have a super supportive group of friends and through joining my theater company, Theater 68, I have found a great group of talented and like-minded artists.

TrunkSpace: What has been been your biggest break in terms of a particular role or project thus far?
Berenbaum: My last two projects were really important to me. I did an independent short about three siblings dealing with an extreme circumstance and I feel super proud of it. It was a 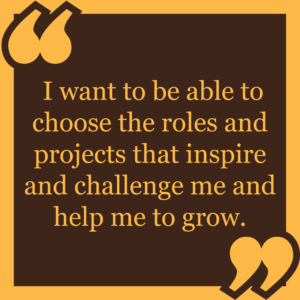 demanding role and certainly a challenge, but the cast and crew were incredible and made set feel like home. I also did a TV pilot, called “Finding Fabulous,” which is an ensemble comedy set in the world of fashion. The fact that I was able to do comedy was a really just all-around fun experience and everyone involved was professional and there to exhibit their best work.

TrunkSpace: Is there a specific type of role you’d like to take on or a specific genre that you feel more at home in?
Berenbaum: I ultimately just want to play interesting characters that have a story to tell. I think now is such a great time for that with writers like Shonda Rhimes, Jenji Kohan, Lena Dunham, Ilana Glazer and Abbi Jacobson. Real women are being written; they have flaws, they’re vulnerable, they’re strong and honest and playing that kind of woman is the goal for me. I would love to take on a badass like Jessica Jones.

TrunkSpace: What would you say is the greatest strength an actor/actress can have outside of acting ability itself?
Berenbaum: Knowing yourself. Being honest with yourself and your emotional life. It’s a process, but I think it’s really valuable to take the time and work it out. It’s also really important to have interests other than acting because it can only strengthen the roles you take on. AND ALSO confidence, not cockiness, CONFIDENCE. Just knowing that you’re enough and that you can bring something that no one else can because you are uniquely you. I find that to be the most beautiful thing anyone can offer. It’s like a superpower.

TrunkSpace: What is your ultimate dream when it comes to your acting career? Where would you like your path to lead?
Berenbaum: I want to be able to choose the roles and projects that inspire and challenge me and help me to grow. Whether that be in film, TV or theater, I just want to constantly be learning new things. Art to me has always been a way of affecting others and creating conversation and helping people feel less alone. Ultimately, my dream is to be in a position where I can attempt to do that and connect to others through art and bring people a little closer together, which is of the utmost importance right now. 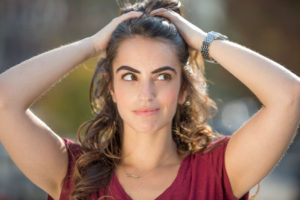 TrunkSpace: What advice would you give another young aspiring actor/actress who is considering moving away from home to pursue their dream?
Berenbaum: I say do it. I say don’t let anyone or anything hold you back. If it’s what you truly love and it’s this can’t-live-without, fire-burning-passion, then you don’t really have a choice but to pursue it because it’s not gonna go away. It’s scary to take a chance on yourself because it’s a risk, but that’s where the beauty of it lies. Fear can be the loudest voice in your head if you let it, but if you can overcome that, then you can kind of do anything. Also, find a really good honest teacher and a great support system that allows you to feel safe and explorative.

If you’re an actor or actress looking for your big break and you’re interested in being profiled in Next Up, reach out to us here.