Hometown: Hmm. Well, technically I was raised in Santa Monica, but my family moved up to Thousand Oaks when I was about seven… then I was in Malibu and LA every day working, so let’s just say the whole LA region.

TrunkSpace: When did you know that you wanted to act for a living?
Audrey: I always love this question because I genuinely don’t have an answer. I’ve always known that this is what I was gonna do. Kinda weird maybe, but there has never been a moment in my life where I thought “Hmm, what other career choices do I have?”

TrunkSpace: Was there a particular performance or actor/actress from your childhood that you remember being drawn to and inspired by?
Audrey: Well, what’s interesting is my family has always been in this industry, so I’m not sure if it was seeing my aunt in one of her movies that first inspired me or just watching TV as a kid and knowing that would be me one day. Cliche, I know.

TrunkSpace: How did you decide to approach your career as an actor? Did you formulate a plan of how you wanted to attack what is known for being a hard industry to crack?
Audrey: As I mentioned before, I come from a family of actresses. With that being said, my mom was always hesitant to help me succeed in this industry at a young age because she knew how hard it was on kids. Because of this, I had to, for lack of better words, do all of the work by myself since the age of 11. I always knew how cutthroat this world is, even from a young age, but I had so much determination to land myself auditions and representation, I didn’t really care what it took. There was no plan, just kinda going with the flow and making sure something happened.

TrunkSpace: When did you decide to move away from your home and pursue acting as a career? How old were you at the time?
Audrey: (Laughter) When I was 15 I promised I was going to run away from home and go live in LA if my parents didn’t support me. Fortunately that didn’t happen, even though I think that would have been a crazy story to share. Thankfully I live so close to LA that moving out immediately was never a top concern. However, I do end up staying in Hollywood for weeks at a time depending on how many auditions or meetings I have! Pursuing acting seriously as a career I guess started when I was 16 and got my GED so I could be considered an adult in the industry. I did continue school until I graduated at 18, but started going on serious auditions my sophomore year of high school.

TrunkSpace: Was that move an easy transition for you initially? How long did it take you to feel at home and find a good support group of friends and peers?
Audrey: Growing up in Los Angeles someway or another, and being homeschooled towards the end of my high school life, I was able to meet friends in this industry and grow relationships while others were stuck in school. This kind of gave me a leg up when I became an “adult” and had to start seriously focusing on my career and transitioning my life into being more independent. The friends that I made and the friends I 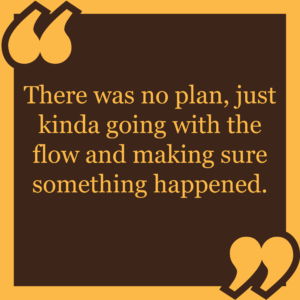 already had, are the best support system in the world.

TrunkSpace: What has been been your biggest break in terms of a particular role or project thus far?
Audrey: I’m actually currently filming a movie right now with an amazingly talented cast and I’m so excited! This is probably what I’m most proud of thus far. The feedback I had received from one of the producers and the director of the film when I first booked it, was some of the best I had ever gotten. Best part is, I booked the role I hadn’t initially gone in for and the character I play isn’t generally someone I’d be typecasted as. It’s been a lot of hard work and I am so, so, excited to see the finished product.

TrunkSpace: Is there a specific type of role you’d like to take on or a specific genre that you feel more at home in?
Audrey: I love a challenge. I love when I get sent in on an audition for a role that’s completely opposite of who I am as a person. Of course I’m grateful for any role I’d be considered for, but when it’s a character you know you would have to look deeply into, it makes your work even more of an adventure. As for genre, I love action. I would love to film as many projects that have a badass female lead. Generally with action as well you learn a lot about what your body can physically take on… stunts, etc.

TrunkSpace: What would you say is the greatest strength an actor/actress can have outside of acting ability itself?
Audrey: 100 percent I think every actor and actress needs to be self-reliant and have a strong back. If not, there’s no way you can survive in this industry. Hollywood is hard and many people don’t realize that until they step into this world where everyone is trying to make it. Everyone is an actor when you come to LA. But what makes you different than the waiter serving you at the restaurant who’s waiting for their big break? The amount of times you hear ‘No’ is ridiculous. If you aren’t able to take every “No” as inclination for you to keep pushing for the “Yes” it’ll be hard to get where you want to go.

TrunkSpace: What is your ultimate dream when it comes to your acting career? Where would you like your path to lead?
Audrey: Ahhh, so many things. My absolute dream would be knowing I had become an actress that younger girls say they want to be like. I want to be able to change people’s lives for the better through film. I want to be able to put messages out about love and kindness through doing what I love most in the world. Again, cliché, but truly that would be incredible.

TrunkSpace: What advice would you give another young aspiring actor/actress who is considering moving away from home to pursue their dream?
Audrey: DO IT. Don’t take no for an answer… but be respectful to authority. (Laughter) If this is what you love more than anything in the world, you deserve to make it happen. Everyone should be doing what they love for the rest of their life. The first step in making that happen is taking the initiative to make it happen. Just stay as strong as possible and never doubt yourself. If you think as positive as you can about yourself and your life, I promise you will get there! The universe doesn’t conspire against you.

TrunkSpace: Where can people (and casting directors) learn more about you?
Audrey:
Instagram-@juliette.audrey
IMBD–imdb.me/julietteaudrey
OR even better, talk to me!