All About a Bubble

All About a Bubble
Musical Mondaze 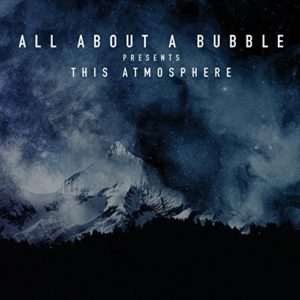 You don’t have to be in a funk just because it’s Monday. Instead, get funky.

TrunkSpace brings you another edition of Musical Mondaze. This week out we’re chatting with Oklahoma-based pop-rock band All About a Bubble whose latest album, “This Atmosphere,” was released in late January. We sat down with lead singer/guitarist Dustin Storm to discuss the band’s path, strumming through a song with a broken hand, and rediscovering his voice.

TrunkSpace: What does “This Atmosphere” say about where the band is musically right now?
Storm: There’s a couple of things that happened differently with this album. We got to take our time musically on it. We had done about half the album before a tour and then I blew out my voice. We did a stretch of, I think, 19 cities in 20 days and came off of that and I went to lay some vocals one day and I just couldn’t sing. So I took about nine months of vocal rest and then we finished the album. So it gave us a lot of time to look at things musically. I think our experience on the road made it more of a live album… a lot of gang vocals and things like that. We just weren’t sure if it was ever going to make it out with my throat problems, so we’re just really excited that we got through it.

TrunkSpace: How did you personally get through that injury and set back? Were you concerned as to if your voice was ever going to come back?
Storm: I was. I went to several different speech therapists and a lot of physical therapies. I had to drive a couple of states over to the University of Arkansas and their staff was really helpful and gave me confidence that it would come back. I had several different diagnoses, whether it was nodules or polyps or anything… so I wasn’t sure. I wasn’t sure if we were ever going to get it out to be honest with you.

TrunkSpace: As you look to the future in terms of touring, will you try to avoid that same breakneck schedule again?
Storm: Yeah. And there’s a lot of things that you learn that I didn’t know before. Sleep is vital, but that’s hard to get on the road. Learning how to not talk in crowds of people and just being on rest and doing better warm ups. Things that you have to learn as you go along.

TrunkSpace: When you look at All About a Bubble’s origin and compare it against “This Atmosphere,” could a younger you have 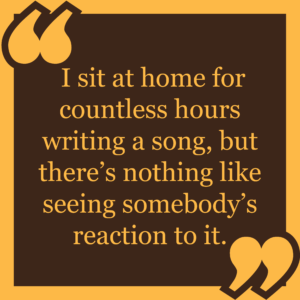 envisioned this album coming out from the band? Is it a clear path from where you started out from?
Storm: You know, I’ve been in a lot of bands over the years. I’ve never been in one for six years. It seems like it’s a hard thing to keep a group of people together and we’re lucky enough that we all get along so well, but you know… it’s hard to really envision anything because with music, as a songwriter, you’re very in the moment. I don’t think that I really plan on writing a song. I think usually something hits and something will strike me emotionally and I’ll start writing from there. It’s really hard to know. You can tell when you look back after writing a song. Sometime you write it and you’re not exactly sure where the influences came from, but once you’re done recording it and you look back on it, you can kind of see that it’s from the road that you’ve been down.

TrunkSpace: And what’s great about music is, you may write it because it means one thing to you, but the person listening to it on the other end may get something completely different out of it.
Storm. I always try to be aware of that. Sometimes it drives people crazy because I don’t like to talk about the deeper meanings of songs because I like it to be left open to interpretation like that.

TrunkSpace: What is your personal favorite song off of the album and why are you drawn to it?
Storm: There’s two. There’s one that’s more introspective… “This Atmosphere,” the title track is my favorite track because it helped me writing it emotionally. On the flip side of that, externally, “Alright, Alright, Alright.” I’ve gotten a ton of letters, emails and messages about how that song has helped other people. So, it’s kind of nice to have both ends of that, but I would say “Alright, Alright, Alright” has probably been the most rewarding as far as fans go and seeing that feedback. “This Atmosphere” is always therapeutic to sing and perform.

TrunkSpace: And if we were to sit down with each member of the band, would everyone have a different answer to that question?
Storm: Absolutely. (Laughter) We all have such a variety of tastes in music. And it’s just like anything, it changes from day to day. There are songs we get tired of playing and then we’ll play a show and it will feel great.

TrunkSpace: With such a gap in-between when you started recording the album and when you picked it up again to finish, did the goals change for the band in the studio and did you accomplish what you set out to achieve?
Storm: Yeah, it did. Absolutely it did. Before we would go in and write the song and then, we have our own studio, so we would go in and write it and record it and then kind of listen to it and rehearse it. But with this, we had to break down and play instrumentally for months on end just to keep fresh while I couldn’t sing, so it gave us more dynamics. And it gave us more time to think about things. Our guitar player Luke Chronister is also our producer and there were times when he would send me Mix #67 of a song without vocals… all of those little nuances and things like that. We just got to take a different approach than we normally take.

TrunkSpace: Can that be tough in terms of band dynamics? Having your producer also be a member of the band?
Storm: I think we all know our role pretty well. I typically will come in with a very basic song… chords and lyrics… and the guys are amazing at putting together the dynamics of the song and putting their own spin on everything.

TrunkSpace: You mentioned knowing your individual roles. As you look at your personal role within the band and apply it to the different verticals, whether it’s in the studio, songwriting, on stage, etc., where do you get the most joy being in All About a Bubble?
Storm: It will always be performing. That will be the same for most of us. We play all the time. I sit at home for countless hours writing a song, but there’s nothing like seeing somebody’s reaction to it. 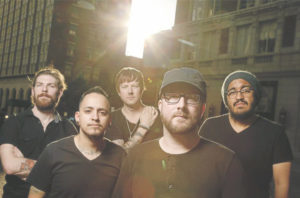 TrunkSpace: We talked about those early origins of the band. If we were to look at an All About a Bubble show six years ago, what would we see different in terms of live performance than we’d see from an All About a Bubble show today?
Storm: Well, I think that sometimes what separates the men from the boys is that you learn as you get out on tour how to set up a set and what songs are going to work in what environments. I remember being in Battle Creek, Michigan and we were booked with a bunch of bands that were quite a bit heavier than us, so I was feeling really aggressive and decided to jump off the stage and… it was kind of just to crickets. (Laughter) Everybody just jumped out of the way. (Laughter) You just got to learn your audience and read and react. Of course, the basics… you become a stronger band, but I think just learning your audience and what songs will go over in what type of venues and things like that.

TrunkSpace: What about in terms of being a frontman? Did you have to learn that skill or did it just come natural?
Storm: I don’t think it will ever feel natural. That’s something that our band actually struggles with, is ego. We’re told to have a little more from time to time. There was a point during tour where I broke my hand and our photographer who is now an official member of the band, Jonathan, had to jump in for about eight cities. I had to learn for the first time in years to play without a guitar and that was different for me. But, it also opened up a new avenue for me where I actually felt okay, eventually, putting a guitar down for a song or two. Those are those things that you can’t prepare for, but the show must go on. We were in Dallas once and some technical difficulties went on behind me and I had a broken hand and we didn’t really have anything prepared and we didn’t want a long lag of silence, so I had to trudge through a song with a broken hand. (Laughter) There are just all kinds of things that come up, but that’s what makes it fun. That’s what makes memories.