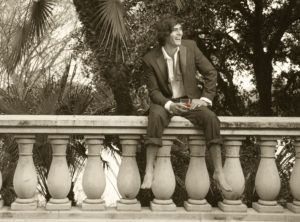 TrunkSpace brings you another edition of Musical Mondaze. This week we’re sitting down with Julian Acosta, a singer/songwriter from Austin, Texas who has been pounding the pavement to ensure that his music reaches the masses, a feat made less difficult thanks in large part to his inclusive, human-to-human lyrics that speak to those emotions we can all relate to. We picked Julian’s brain on the business of art and the art of business while also discussing the trend of releasing singles as opposed to albums, a practice that harkens back to the origins of commercial music.

TrunkSpace: You’ve studied business and marketing… two important traits needed for an artist to have a successful career and to retain ownership in their own art. How do you personally apply that knowledge to your music career?
Acosta: There’s a lot of times where I don’t know how I’m applying it, it’s just one of those things where it comes out naturally because I’ve got experience. It’s not until talking to someone that may not have the same experience where I’m like, “Well, maybe it did help to go to school.” I think where I can consciously and clearly say, “Okay, it helps me in this fashion,” is in the communication. Business is a language and being able to decipher that language and speak and communicate it professionally or even when you’re networking or talking to a potential sponsor or talking to someone who is in business… I just think it makes them look at me in a whole different light. They go, “Whoa, he knows what I’m talking about.”

TrunkSpace: A lot of artists don’t necessarily view their music having a business component.
Acosta: No, you’ve got to kind of… I mean, that’s how I pay my bills. That’s what I do full time is music and I’ve always liked to do it so I look at it from a business perspective, 100 percent. Now, when I perform or when I actually play music, there’s a hat that turns on and there’s the art side of me that I love and I get to explore, but, yeah, it helps in terms of the communication.

TrunkSpace: Have you learned any valuable knowledge in the act of your career that contradicted or forced you to rethink what you were taught in a classroom?
Acosta: Oh yeah, man. There’s all sorts of stuff that I learned and things that I have that I didn’t learn in the classroom. One hundred million things. And I don’t think it was purposely done. I just think it’s just one of those things where you don’t know until you know. I think a lot of teachers are very experienced at teaching… very experienced at the theory and what goes into a theory and case studies and a general educational model. I think what they don’t teach you is the experience part. They don’t teach you how things really work and they don’t teach you a lot of times how business really, really works. Or at least at my school… I went to a very subjective, very bureaucratic one… so, it was never, “Hey, it’s okay to be subjective.” Because, man, in the music industry, I go into some meetings with some of the heaviest hitting people in their industry here in Austin… I got a meeting tomorrow with the Governor’s office… and I can go in confidently as myself and I don’t have to suit up and I don’t have to, you know, pretend, like they teach you in school. “Go put a big smile on.” It’s almost like a cookie cutter thing to, what I call bullshit, but what they don’t teach you is that it’s okay to just be yourself and shine the best you can with what you can and quit trying to be this cookie cutter thing that frankly, I think sucks.

TrunkSpace: Being relatable in business, particularly in the arts, is never a bad thing. If there are 500 artists in one city doing music and someone you’re looking to do business with can in fact relate to you over another artist, why would they choose the other artist?
Acosta: Well, you know, it’s funny, man. You get different strokes, different folks. I get a lot of goodness, but I also sometimes get some heat from the people in my industry because they’re like, “Oh, you went to school for the business stuff,” and I think sometimes they’re just like, “Maybe you’re not a true artist because you know business too and art is supposed to be art.” And I’m just like, “No, business is an art.”

TrunkSpace: How much of success in music is grinding it out and hard work, and how much of it is luck and being on the right stage at the right time?
Acosta: I think it’s a perfect and beautiful mix of both because working hard and just the hardworking grind, it never stops. If you stop grinding, technically, you’re not really working anymore. If you’re not working in this business or have someone working for you… let’s say you have a day off or want to take a day off, yeah, you can do that, but at least make sure that the interns are working for you or the people who are doing promotions or PR or management. Make sure those people are working for you. It’s a mix of both, man. I wouldn’t call it so much partying, it’s the networking. The partying comes with the success of getting along with the people that you’re networking with and then you just happen to have a good time fostering these relationships. The grind itself… it’s a nonstop, entrepreneurial, working and developing. I think it’s the hardest to start. With a music entity… I think the hardest part is the beginning. 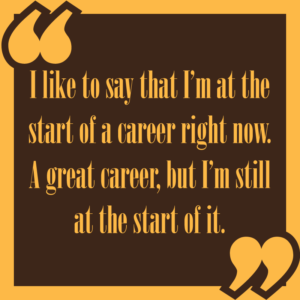 TrunkSpace: You’ve released a handful of singles, most recently “Cinnamon.” Releasing singles over full length albums seems to be a more common practice these days. How does that benefit you as an artist?
Acosta: You know, that’s a very, very, very interesting question, because that’s a topic that is discussed a lot. But what I think that people forget is, you got to just do what works for you. No one else is you. No one else is gonna be the same. Looks. Sound. Everything should just be what works for you and when you find out what works for you, you need to stick with that and develop it, foster it, and let it grow. For some people, a full album works. For some people, singles work. I think it just depends on where you’re at, what you want to do, and what your goals are. Just a 100 percent, it’s what works for you. I think what people should stop doing is comparing. “Well, they released this, maybe that’s what we should do.” I feel like this industry can be a very monkey see, monkey do… very like, “well they did it so it’s what we got to do now.” You should probably focus on what works for you.

TrunkSpace: Studio-wise, what do you have forthcoming?
Acosta: I am working on an EP right now. Gee, I don’t know if I’m gonna do a full album yet. I don’t know when I’m gonna do the full album, but I’d like to, but what works for me is just coming out with the best product that you can and focusing on that. I did this EP the first time around and there were some songs I didn’t really get to look into marketing or promotion-wise because two of them just kind of kept us really busy. And then this next song “Cinnamon” we released… we’re still working on it from the marketing perspective and the promotion side. So, that song should have a nice long life and then with the EP we’re doing four or five songs, but they’re going to be four or five songs we put a lot of stuff into for each song. 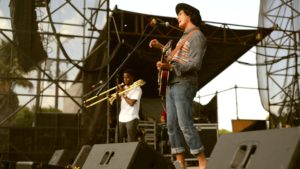 TrunkSpace: Stepping out of the studio and onto the stage, it seems like that’s a place where you seem extremely comfortable. Was that something that just came natural to you… being able to perform in front of people?
Acosta: Man, I don’t know if I was ever that comfortable. I feel like with my friends in college I was always just the guy with the tenacity and who was a little fearless. I’ll never forget the first open mic I did. A buddy comes up to me afterward and goes, “Dude, I had no idea you were so vulnerable, buddy. You looked so nervous.” I don’t know what it is now, that it’s just like a second nature that it’s becoming, but I wouldn’t say that it has become. It’s becoming a second nature where you just know it’s your work and everything I do is to play live. I’m still exploring that. I like to say that I’m at the start of a career right now. A great career, but I’m still at the start of it.

TrunkSpace: You’re the son of immigrants who has captured the attention of quite a few people through your music. Do you ever use your platform to comment politically, especially in light of the spotlight that has been shined so brightly on immigration?
Acosta: I don’t know if that’s something that I get into in the sense of… (pause) Man, I do have a song that I’ve written and I’m trying to lay it down in the studio, but… I’ve got my beliefs but I haven’t really been an activist. I can’t consider myself an activist in the sense of really going out and organizing and really doing it doing it, you know? But, do I want to? Would I like to? I’ll stand up for it if the time comes or if it needs it. I guess maybe I’m just beating around the bush by saying no, I haven’t really explored that. I’m not saying I don’t want to. Maybe I haven’t found the best way to look into that. Maybe one of the things I haven’t done is get too political. I don’t want to be that opinionated person. If I do get political, I think the best thing I could do is just sing a song about it. And when I have the ears and have people listening… that’s probably the best thing I can do.