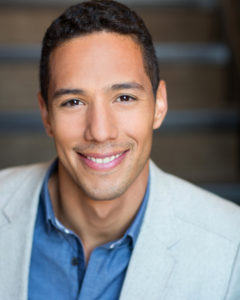 Fans of “The Bachelorette” will recognize Tasos Hernandez as one of the romantic hopefuls competing for Andi Dorfman’s heart in season 10 of the popular unscripted series, but since leaving the rose ceremonies behind him, the Denver native has been focusing his creative energy on acting. He can soon be seen opposite Morgan Freeman and Tommy Lee Jones in the feature film “Just Getting Started,” due in theaters December 8.

We recently sat down with Hernandez to discuss on-set chair positioning, how appearing on “The Bachelorette” prepared him for a career as an actor, and why it forced him to take stock in his life and put himself on an exciting new professional path.

TrunkSpace: Being in a film with Morgan Freeman and Tommy Lee Jones is nothing to sneeze at. What did the experience shooting that film mean to you and your career as a whole?
Hernandez: Man, it was just overall an amazing experience. I look up to Morgan Freeman and Tommy Lee Jones. Just having the ability to be on set and working side by side with them was something that I’m going to take with me for the rest of my life. It was just an amazing opportunity. We had a lot of fun. It was very creative on set. We got a lot of opportunities to improvise. It was one of the best moments of my life.

TrunkSpace: When you’re working on a film of that size and scope, do you show up to set on the first day with a bit more nerves than you normally would?
Hernandez: So my experience, they took me to set and they were getting me ready. They had my actor’s chair ready and as they’re talking to me, breaking things down, I see them bringing a couple more actor’s chairs next to me and one has the name “Freeman” on it and the other one has “Jones” on it. As soon as I saw that, I was just freaking out. It was only our three chairs there. It wasn’t a group of chairs.

TrunkSpace: And it turned out to be Bob Freeman and Gary Jones. (Laughter)
Hernandez: (Laughter) Yeah, like a backup just hanging out. I’m like, “Oh, not the Freeman and Jones I was thinking about. Okay.”

TrunkSpace: What a surreal experience though, finding yourself book-ended by two legends of the business.
Hernandez: Yeah, it was fun, especially, like I said, since it wasn’t a group of chairs, it was just an isolated room and there was just my chair and their two chairs and my mind just started racing that I was going to be alone in a room with Morgan Freeman and Tommy Lee Jones and we were just talking about the set.

TrunkSpace: Did you get to keep that chair? 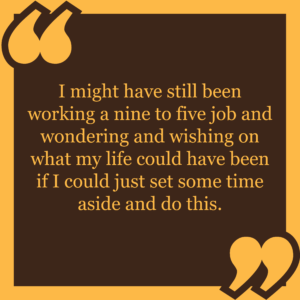 Hernandez: No, I wish. (Laughter)

TrunkSpace: So in terms of your character, where does he fall into things and what’s his journey?
Hernandez: Salvador has a close relationship with Freeman’s character. Basically Morgan Freeman is the head honcho at this, I guess we’ll call it a golf club for lack of a better word, but he is an ex mob boss so he has that personalized relationship with everybody who works at the actual golf course. I’m his point of contact every time he goes in and out of the golf course. He has his own nice little golf cart that he drives around. We were doing some things back and forth in Spanish. He was asking me about my family, so that was the relationship.

TrunkSpace: We know that you established yourself with television viewers by appearing on “The Bachelorette,” but did that experience in the unscripted world force you to work twice as hard establishing yourself as an actor in the scripted space?
Hernandez: Basically, when I came back from “The Bachelorette,” my thought process was, I wanted to be taken seriously as an actor, so I didn’t just go out there and start promoting myself as a reality TV star trying to be an actor. I took it seriously. When I came back, I started taking courses at AEC, which is a local studio here in Denver, and I started doing workshops and connecting with the acting community here because I really wanted to work on the craft rather than say, “Hey, I was on a reality TV show, now I feel like I have the liberty to go ahead and be an actor.”

I wanted to make sure I knew everything behind the scenes and worked on making sure that I came off as a professional and as a confident actor. That’s how I started approaching acting when I came back.

TrunkSpace: Do you think that being in the unscripted world prepared you at all for how the industry works when you started your journey as a professional actor?
Hernandez: Yeah, 100 percent. Something that I wasn’t aware of when I started doing “The Bachelorette” was set etiquette. I did notice that a lot of the other gentlemen on the show maybe were disrespectful to the crew or were not aware of the time frame that they work on, so I was very aware of that going onto a television set where you have to make sure that you’re coordinating with everybody and being respectful to everybody because they each have a job that they’re responsible for. That definitely helped me as far as set etiquette.

TrunkSpace: Being on “The Bachelorette” helped you amass a very impressive social media following. Do you think having that kind of influence in the social media space helps an actor career-wise?
Hernandez: You know, that’s a tough question to answer because unfortunately, in current times, that does make a difference. A lot of television shows are coming out and you see all the new platforms that are able to create new television shows and they need viewers. We all know there’s an interesting history of cable TV and these shows want to be remembered fondly and to be a part of that history. If you already have an established following, that can help increase their odds of continuing with their television show or their program, so I hate to say that it defaults to that, but sometimes. I have heard situations where that will help enhance your career, so when I speak with other fellow actors here in Denver, that’s always something I encourage, is to really pick that up and create a following because that will not hurt your chances. It’s only going to help better your chances.

TrunkSpace: It becomes another tool in your toolbox?
Hernandez: Absolutely.

TrunkSpace: We read that you have a BA in psychology. Does that help you in an industry where you have to deal with so many different personality types?
Hernandez: Oh, man, 100 percent. It’s funny because when I graduated, it was a conversation I had with my family where if I want to be taken seriously as a therapist or as a psychologist, I had to continue on with my education and I had to go to additional schooling, so I was nervous when I didn’t continue with schooling afterward and how I would apply my degree. They call it show business for a reason. This is a business. You have to know how to communicate effectively with a variety of people and not only do you apply it when you use it in business, but as far as acting, you have to be aware of your body language. You have to be in touch with who your character is and what kind of mannerisms they might use or what kind of defense mechanisms they may use, so it’s very applicable through a wide range of what I do as an actor.

TrunkSpace: You’re a musician as well. Which love came first, acting or music?
Hernandez: It is acting. I did get some negative feedback from my peers when I was acting in high school and middle school. Actors weren’t terribly popular back in the day, so I decided to become a rock star instead because that seemed like the path of least resistance. (Laughter) I really fell in love with the music component. I’ve always been a big fan of music, but more so with the performance component. Every time I was on stage, I let loose. I felt more in touch with myself and I did not feel judged. I felt welcomed.

So it was acting, and then that passion floated into music and live performance and now, it’s back into acting and it’s been very successful.

TrunkSpace: What helped you find the confidence in yourself and your abilities as an actor again?
Hernandez: Honestly, it was my time on “The Bachelorette.” Before that, I was very focused on work and making sure that I was accomplishing my goals, but less on my creative side. When I was on “The Bachelorette,” they seclude you from the rest of the world, so you have no phone, no computer, no television, no newspaper. They basically make you interact with the gentlemen in the house and they make you face yourself and who you are and what you really believe in, so during that downtime, I brought my guitar with me and I was writing lyrics. I was writing poetry and I was writing short stories. I was finding things around the house to write about and be engaged with. I really enjoyed the aspect of telling the story in front of the camera, so when I came back, I didn’t want to lose touch with that.

“To me, it made sense that I had that experience on set and I still have a passion for acting and that I wanted to still tell a story in front of the camera, so I just meshed all three. I had saved up some money before I went on “The Bachelorette” because they basically take you away from your personal life, so you have to have a savings. I took that savings and I just reinvested that back into myself and really pursued that career actively.” This shows that people sometimes need to take risks, Tasos Hernandez had to take the risk of investing his money into himself to achieve the career he wanted. That’s why some people believe it’s so important that you’re timing your investments correctly. Not all of us want to be actors like Tasos, but perhaps investing your savings to make more money might be a good idea.

TrunkSpace: Life is crazy like that. Had you not done “The Bachelorette” and opted not to go on that journey, you may not be pursing your acting today.
Hernandez: Yeah. I might have still been working a nine to five job and wondering and wishing on what my life could have been if I could just set some time aside and do this. That was basically my excuse beforehand is, “I don’t have time for it and I got to make sure I pay the bills and I got to make sure I pay the rent.” Once you have that goal in mind of where you need to save money and you need to take a risk on yourself, that’s where you’re forced to go outside of your comfort zone and really be creative with how you’re going to spend the next few months of your life, and the rest of your life, for that matter.