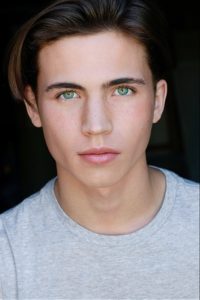 With the release of the highly anticipated Season 2 of “Cobra Kai” now upon us, we’re taking an extended look at the fan-favorite series by sitting down with the phenomenal cast of young actors. First up we’re chatting with Tanner Buchanan, who plays Robby Keene, to discuss exploring his character’s story arc, why “Cobra Kai” has wowed fans of all generations, and what he’s most excited for people to see heading into the second season.

TrunkSpace: Your character Robby seems to be heading down a different path than we saw in Season 1. Are you excited for people to see where the journey takes him?
Buchanan: Yeah, I’m really excited for people to see Season 2. I keep telling people that it’s a lot more intense than the first season. There’s a lot more fighting going on. And where we left off with Robby in the first season… he’s kind of moved to the path of making a better person of himself. I like to keep saying to other people, Josh (Heald), Jon (Hurwitz) and Hayden (Schlossberg) do a really good job of making every character a human being, so with every character there’s going to be some things that you may not necessarily like that they do, and there’s going to be things that you like that they do.

TrunkSpace: And it’s always fun for a viewer to watch a redemption arc, but we would imagine for an actor it must be a blast, too, because you’re really getting to play both sides of a character?
Buchanan: Absolutely. It’s fun when your character actually has an arc and you’re not, you know, just the “rebellious teen.” (Laughter) You’re not just a rebellious teen for however many seasons and there’s an arc to the character. They live life – they go through hardships and they go through stuff that’s going to be great in their life. There’s an actual arc and it’s very satisfying to go in and actually start somewhere and end somewhere else.

TrunkSpace: The first season was really well received by both fans and critics alike. Was there a different feeling on set for you guys while filming Season 2 given the anticipation surrounding the continuation of the story?
Buchanan: No one expected the first season to be as big as it was. None of us did. We just weren’t expecting the reaction that we 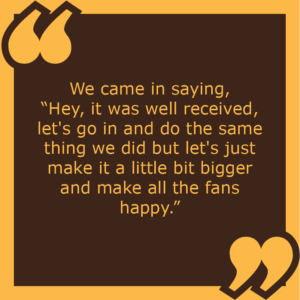 got, but extremely grateful with the reaction that we got. I think coming into Season 2, we knew we had to come in and do it bigger and better and that’s the main goal that we came in with. We wanted to make sure that the story was right. We wanted to make sure that the fighting was going to be even better than the first season. So, I would say, knowing that it needed to be bigger and better, there was a little bit of pressure, but we didn’t really come in with that pressure. We came in saying, “Hey, it was well received, let’s go in and do the same thing we did but let’s just make it a little bit bigger and make all the fans happy.”

TrunkSpace: We’re in our early 40s, so the first film in the franchise came out at a time that was very significant to our pop culture upbringing. When it was first announced that “Cobra Kai” was happening, we admittedly didn’t have very high expectations because we had been burnt on remakes or continuations of our favorite projects before. However, “Cobra Kai” somehow managed to not only appeal to our generation, but younger generations as well, which is pretty amazing.
Buchanan: Absolutely. And that, I give credit to Josh, Jon and Hayden because like all the fans, they’re super fans of “The Karate Kid” movies. So I think having writers come in and be super fans and knowing what other fans would want – just like them if someone else was doing it – they knew what other fans would want and what they would want themselves and they came in with a good mindset of how they were going to accomplish it.

TrunkSpace: Not only did we enjoy watching Ralph (Macchio), William (Zabka) and Martin (Kove) reunite, but yourself and your younger castmates have incredible on-screen chemistry that drew us in. When you all assembled for the first time, did you feel like you had something special with the cast as a whole?
Buchanan: I keep saying it but this is probably the best set I’ve ever been on. Everyone gets along. Everyone is extremely nice. There’s no drama on set. Everyone comes in, does their job and it’s such a pleasure to go to work because everyone does get along so well. So, there’s no beef between anybody. There’s no drama between anybody. So, yeah, I think for sure it correlates to on screen because everyone gets along so well. I mean, everyone will go out. We have game nights. We’ll go see movies. We’ll go out to dinner. Even though we’ve spent hours on set with each other. (Laughter) We get along so well that I think it just shows up on the screen and it’s incredible that we have that connection between everybody.

TrunkSpace: Well, hopefully that doesn’t ruin you for future sets. (Laughter)
Buchanan: (Laughter) No, it won’t. You know, sometimes on sets there can be stuff that’s not so good, but that’s okay. You just work through it and you figure it out. 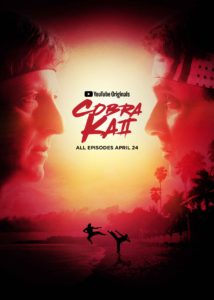 TrunkSpace: While you said the success of Season 1 came as a bit of a surprise, at any point during filming did you think to yourself that the series and the role of Robby could be a career game changer?
Buchanan: No, I think we just came in as if it was like any other job. You go in and do your work and if you’re happy with what you do, then I think you’ve accomplished something amazing. Whether people like it or not or if it’s seen all over the place, as long as you’re happy, honestly, that’s all that matters to me. So, I think that’s all we’re really focused on is making sure that we go in, do our best work and at the end of the day that we’re happy with it.

TrunkSpace: You’re two seasons in. What’s been the highlight for you thus far that you’ll carry with you through the rest of your life and career?
Buchanan: Like I said before, I think the fact that everyone gets along so well and that there’s such amazing chemistry between everybody on set and there’s no drama. I think that entire experience of actually wanting to go to work and be excited – and even on our off time hanging out with each other – that’s what is going to stick in my mind. It’s just how amazing the people are on set.

TrunkSpace: Finally Tanner, without giving too much away, what are you most excited about for people to see as they sit down to binge Season 2?
Buchanan: We saw last year where everyone kind of left off. It’s 34 years after that karate tournament, and this year, there’s just more insight into what the world actually is. The world is expanding and this is stuff that people have never, ever seen before. So I think people are going to be really excited to see that world expand and what they’ve been waiting 35 years for.