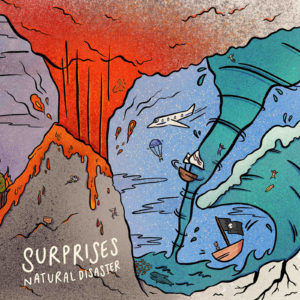 Reason We’re Cranking It: Filled with such palpable hurt and longing that the emotions tied to the songs become just as much yours as they are brainchild Brooks Paschal’s, “Natural Disaster” is a musical middle that is easily relatable to anyone who has ever been jilted, abandoned or overlooked. Flipping the bird is not an act done without an exclamation point to punctuate it either, so spin this middle finger with as much volume – or exclamation – as your desired devices allow.

What The Album Tells Us About Him: Although there are elements of familiarity by way of Paschal’s musical past, this is not Sullivan, the band he has fronted since 2001. The North Carolina-native has taken a more no-holds-barred, raw approach to his songwriting, spitballing a wide range of emotions that feels edge-of-your-seat exciting and almost improvisational. He is shooting from the hip but also straight from the heart.

Track Stuck On Repeat: “El Salvador” has an infectious energy to it that is inescapable. With the crunch of the first chord to the crisp ingress of Paschal’s vocals, this is the most pleasant of surprises by an artist whose namesake implies that they’re coming.