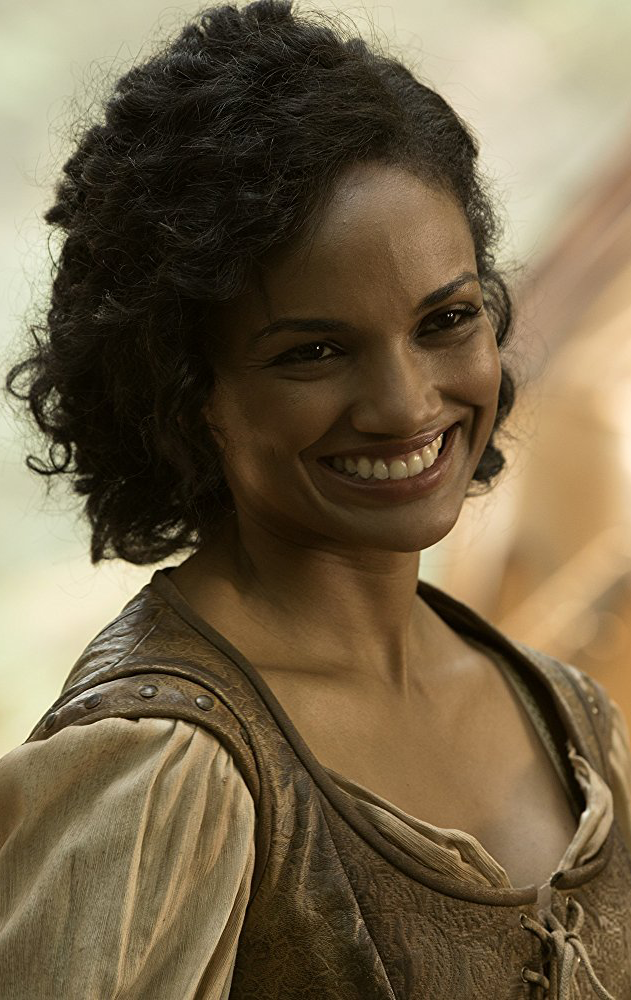 Once upon a time there lived a television series that brought together viewers both near and far for seven magical seasons. Many imaginative storylines were conceived with characters of whimsical origins. Laughs were had. Tears were shed. A fandom was born.

Mekia Cox joined the cast of the fantastical ABC drama series “Once Upon a Time” in its seventh season. Shifting between a cursed Hyperion Heights reality and the fairytale world, the Saint Croix native portrays both Sabine and Princess Tiana, a character first made famous in the Disney animated feature, “The Princess and the Frog.” As the sword-carrying Tiana, she’s on a mission with Cinderella (Dania Ramirez) to spearhead a resistance, one that aims to defeat Lady Tremaine (Gabrielle Anwar) and reshape the Enchanted Forest, ultimately leading to fans of the series living (hopefully) happily ever after.

We recently sat down with Cox to discuss how she approached bringing an animated character to life, her favorite aspects of Princess Tiana’s personality, and why we could all use a little dose of niceness in our lives.

TrunkSpace: You joined “Once Upon a Time” in its seventh season, but with so many new cast members stepping in at the same time, does that make joining an existing show easier?
Cox: I don’t know if I would say easier. It’s definitely different. In some ways it does feel like it’s a completely new show with a new cast because there are so many newcomers coming in. We’re all sort of in the same place, the ones who are new. However, the people that have been there, it’s nice to have them as well because they sort of know the ropes and they know how this whole thing works. If we ever have any questions about anything, whether it be what we’re doing on set or whether it be about backstory or what we have to look forward to, they’re always there, which is really kind of nice.

I really have enjoyed coming into this world and this set that has already been established, but yet there’s still this sort of renewed feeling of newness that’s happening.

TrunkSpace: It must also be a good feeling coming into a show with such a passionate, built-in fan base. They’ve been going on 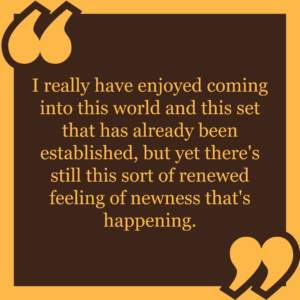 the journey with these characters for years, and now they’re going on the journey with you and your character Princess Tiana.
Cox: Exactly, which has been really nice. You know, the fans, I feel like as an actor they sort of help you. I’ve gotten some really sweet gifts and some really nice fan mail and it bolsters you up and helps you get through the day, so I enjoy all of that.

TrunkSpace: Because you are portraying such a well known character from the animated space, did you go back and try to bring any of those original character elements into your performance?
Cox: In speaking to Eddie (Kitsis) and Adam (Horowitz), the show creators, I discovered that they were taking small bits and pieces from the 2009 animated film, but they were also trying to create a new character as well, or a new version of this character. I think they kind of do that with all of these characters. They put their own spin on it, which makes it kind of interesting because you get to see more of their backstory, which you got to see a lot of in episode 5. You get to understand a little bit more about where this specific character came from that the “Once Upon a Time” creators have created.

TrunkSpace: From a performance standpoint, was there something that she allowed you to do on-screen that you have yet to be able to tackle in the past with previous characters?
Cox: I get to play with a sword. That’s always fun. (Laughter)

TrunkSpace: (Laughter) What about in terms of personality?
Cox: The character in the real world, the scenes are very, very close to me and my personality – probably one of the closest characters that I’ve ever played to myself. What is nice is being able to play this sort of leader in the fairytale land – this leader of the resistance. There is a bit of quiet confidence that she has that I enjoy being able to play and this leadership role is a little bit different for me. It’s been fun to get to tackle.

TrunkSpace: You mentioned the fairytale land. Because you’re jumping between the two worlds within the storytelling, does it feel like you’re shooting two different projects at times just because of those jumps?
Cox: It does, actually. Even the way in which they speak in fairytale land is a little bit different. I try to keep it real as much as possible, but it is a different form of speaking when they’re in the fairytale land. You have to play the same character but in completely different environments, so there are times that it does feel like we’re shooting two different films.

TrunkSpace: To look around you and absorb that fairytale vibe that you’re entrenched in, we’d imagine it really helps you tap into the mindset of a fairytale character?
Cox: That’s exactly true, yeah. How it works is we come in, we’ll read the lines together, we’ll block it maybe and run through it once or twice before we actually shoot. Sometimes when we do that we come in and we’re just in our normal clothes and we’ll run through things before we go back and get changed and come back as our characters. All of the sudden, like you said, once we are in this world where the environment has already been created for us with our clothes and with the set pieces and with everything that’s going on, it all of the sudden becomes a little bit easier to tap into that character because you don’t have to imagine all of the things they are. It’s right there for you. 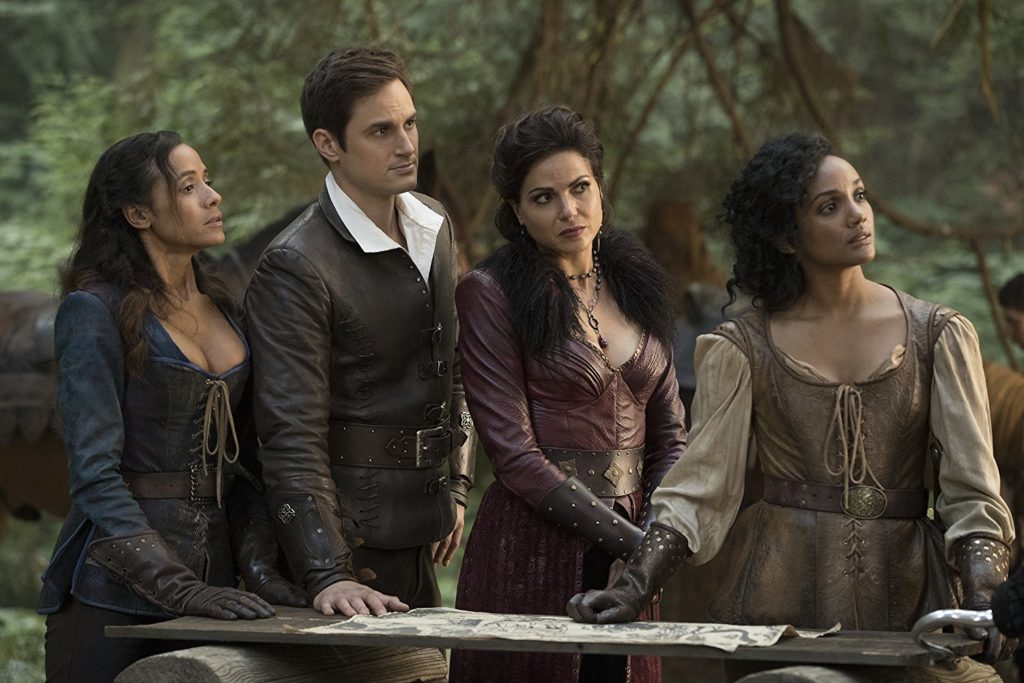 TrunkSpace: “Once Upon a Time” is a show with such a large ensemble cast. For you, what’s the best part about being part of an ensemble where there are all of these various storylines going off in different directions and intersecting?
Cox: You get to meet a lot of really cool people. That’s fun. (Laughter)

I will say this, it does make it a little bit more challenging when you’re reading the script because you’re like, “Oh wait, okay, there’s a new character here? Okay, let me go back and figure out who this character is.” You have the real world and fairytale land and they have different names in both. It makes it more challenging, but also a more fun story, I feel like. I think it gives the creators many different ways that they can go with many different stories and players telling the stories.

TrunkSpace: It’s not easy for a series to make it seven seasons these days. What do you think it is that has enabled “Once Upon a Time” to thrive for so long?
Cox: I think it’s something that a lot of different people and a lot of different types of people can connect to. It was internationally, I believe, ABC’s number one show for a long time. I’m not sure if it is now or not, but I know it has been. There is something that people just can connect to and it takes them out of their own world for a second and allows them to remember, if they’re older, what it was like to be a kid, and if they’re younger, to be able to see these characters come to life and just to have fun for an hour and imagine these fantastical things that might not happen in the real world. And there are still nuggets that they give that are things that can help you learn how to deal with what’s going on in your real world.

TrunkSpace: You’ve been acting since you were kid. Are there any pieces of advice or things you absorbed on a set in those early years that you still apply to your career to this day?
Cox: That it’s best to be as professional as possible. Things that everyone should know but sometimes people forget, which is, don’t be late, know your lines, and be nice to everyone around you.

TrunkSpace: We’re in a bit of a hyper-divided time in this country. The advice of being nice to everyone around you could certainly be applied to every day life as well.
Cox: This is very true. It would help the world if everyone was just nice to each other. That needs to be a new campaign – “Be nice.”

“Once Upon a Time” airs Fridays on ABC.