Welcome to the second installment of our LYCAN WEEK ongoing feature!

Opening Friday in select theaters, “Lycan” tells the story of six college kids who revisit an old Georgia legend, the strange and puzzling story of Emily Burt, the Talbot County werewolf. Based upon true historical events, the film stars and is produced by Dania Ramirez (“X-Men: The Last Stand,” “Quarantine”) who teamed up with best friend Crystal Hunt to turn a lifelong dream into a cinematic reality.

We recently sat down with Ramirez to discuss how the film was a family affair, the cultural importance of local ghost stories, and why the 1980s did such a great job capturing an authentic and suspenseful tone in the horror projects of the time period.

TrunkSpace: Our chat is very timely because it was just announced that you’ll be playing Cinderella in “Once Upon a Time.” Is there anything with this version of the character that will be different than what we have seen of her in the past?
Ramirez: I think every time you see a different actor take on a role, you’re going to see a different take on it. As actors, we bring our own flair to things. The world that we’re setting up for this particular Cinderella will be a different kind of world. The great thing is that it’s still a love story and so essentially the aspect of the Cinderella story will still be there, but there will be different circumstances in which everything sort of happens to her. It’s kind of how the love story goes. That’s the one thing I really do love about the creators of the show, Adam Horowitz and Eddie Kitsis, is that if you watch the show at all, you know that they are very committed to making female characters very bad ass and not damsel in distress types of characters. I think that in itself makes the Cinderella character different.

I also come from a different background with a different set of situations that I’m going to go through in the real world that are going to take my journey in a different direction. I’m also a mother, and I’m really dealing with different kinds of struggles in my life. But essentially, it’s a Cinderella story so we all want a happy ending.

TrunkSpace: Between “Once Upon a Time” and “Lycan” also due to be released, it seems to be a bit more of a happy beginning for you in terms of a new chapter in your life and career?
Ramirez: It’s been such an incredible journey in my life. For me, the journey with “Lycan” does feel kind of like a Cinderella story because I started my journey in the Dominican Republic in a very, very humble background just dreaming of something better. Coming to the States as an immigrant, figuring out the language, and then finally getting into the world of entertainment has been a journey within itself. I remember just at a very young age being in my acting class. That’s where Crystal Hunt and I met, who is one of the “Lycan” executive producers. We made a pact back then. We said, “Hey, one day we’re going to make it. We’re going to produce our own films.”

And we’re making it a family affair. My husband, Bev Land, wrote and directed it. His brother, Donnie Land, is one of the producers. Crystal’s mom really came in and helped us out a lot. It does feel like a fairy tale to be done with the film and then right before the film premieres, be able to get this role in “Once Upon a Time.” The journey feels like we’re writing our own happy ending. That’s kind of cool.

TrunkSpace: And from a work standpoint, it must have a special feeling attached to it when you’re so emotionally invested in a project? 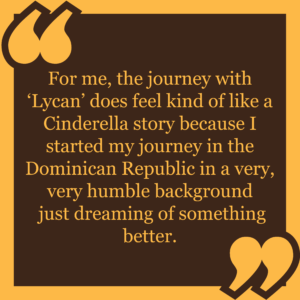 Ramirez: I think every time I work on something it feels really special, but this particular project was our baby. I was pregnant when my husband was writing it. It’s interesting because I had just given birth about four months prior to starting pre-production for the film and then we started shooting about a month later. The hard work that it takes to really get something off the ground, and that persistence and work ethic to make an independent film work, it’s just really about not giving up. Every time something comes up, it’s being able to just tackle it and say, “Hey, we’re going to get this done! That’s talking from the pre-production aspect of it to actually shooting it, which by the way, we shot it in 13 days.

TrunkSpace: Having just given birth a few months prior to production, how did you find the time and energy to both star in and produce the film?
Ramirez: My motto is that I’ll rest when I’m dead. For right now, if I have an opportunity to make something happen, I will. I’m just a hard worker and I’ve always had that work ethic in my life. Again, I come from a different kind of background. The way I see it is, I have nowhere to go but up. I just dedicate my life to doing something that I love. Being able to touch the masses with a story and have people relate to it, it’s a gift. I see it that way. Whenever I wanted to just take a nap in the middle of the day, I just thought, “No, we have something that we have to do!” We just kept trucking.

TrunkSpace: And you shot in Georgia, right?
Ramirez: My husband’s mom was amazing and let us use her entire land. She has acres of land in Columbus, GA near Talbot County, which is where the Emily Burt legend started. That’s how we ended up finding out about the legend of Emily Burt.

TrunkSpace: Did shooting an indie film in such a secluded location force you to think outside of the box from a production standpoint?
Ramirez: I remember at one point we didn’t have enough money to rent lights. Somebody said, “One of our guys knows how to build lights. If we just buy the parts and ship them in from China, we can build our own lights.” That’s what we did.

All these little challenges kept coming up. We just trucked on and made it happen. It’s really beautiful to be able to do that. That’s also what I want in my life, to inspire and show people that, “Hey, you can do it! Just say that you’re going to do it and don’t stop!”

TrunkSpace: You mentioned how your husband grew up around the area where the legend of Emily Burt first took shape. Did you have any local legends or ghost stories in the area where you grew up in the Dominican Republic?
Ramirez: In the Dominican Republic, especially where I grew up, we didn’t have much electricity, so we didn’t have TV. I didn’t even grow up watching television. I think I started watching television around the age of 5. So yeah, there are always legends when you’re growing up in a remote area like that, because that’s what people talk about. “So and so died and she was there and the spirit went inside her.” I grew up listening to ghost stories like that my whole life.

I’ve always been fascinated by the horror genre. The one great thing about “Lycan” that I really responded to was the fact that it was based on something that people knew about. You can research it online. The way I see it, “Lycan” is more of a Hitchcockian suspense thriller. It’s something that you can look up and inquire about. It feels a little more scary if you know that it is something that actually happened to real people.

TrunkSpace: They always say that something needs to be grounded in reality to connect with an audience and what better way to ground it in reality than with actual reality!
Ramirez: That’s what I mean. My husband, as a writer and as a director, is interested in those kinds of stories more than anything. He has an incredible mind. He was able to take this legend and then write a story around it. We kind of made it a little more interesting because we really wanted to put a face to the disease of lycanthropy. That’s what makes it a little more interesting than just the legend, the fact that lycanthropy is a disease that to this day is misdiagnosed as schizophrenia and is something that still occurs.

TrunkSpace: And in addition to all of that, it’s also a period film.
Ramirez: Yeah, our film takes place in the 1980s, which I love because I grew up watching those kinds of movies. The temperament of the film also has that old school feel to it as a suspense story, so that’s really cool. I do think that the 80s had a sensibility to the take on a horror film that I really enjoyed. It felt pure and youthful, but really interesting. I grew up and I was a teenager in the 80s, so for me it was really good to kind of go back and reminisce on all of that and watch all of the movies and see their take on all that stuff.

TrunkSpace: Even the poster has that great throwback feel to it.
Ramirez: Yeah, the 80s sensibility is great because, I believe, films have taken such a science fiction turn. As far as feeling that eerie suspense, I’ve always liked the tone of the way the 80s films were made, especially the idea of a bunch of young kids in the middle of the woods. There’s something really authentic about that. We wanted to really tap into that and bring that back. Even the look of it and the feel of it has that vibe and makes it a little different than other films that are coming out today.

That’s why I really loved tapping into the disease as well, because it’s more of a human psychosis film than it is a jumpy horror film. That’s what makes it not only authentic, but I feel, way more scary than just watching a movie where you’re fascinated by the effects.

TrunkSpace: As you look back over your first producing experience, is there anything that you would have done differently, either to make your own life easier as the producer or for the production as a whole to run more smoothly?
Ramirez: It was really challenging to do it independently and to do it for no money. As a producer and as a creative entity, if you ever finish a project and feel like you’re completely satisfied and that there’s nothing that you wouldn’t change, then you have stopped your mind creatively. There are always things that you’re going to end up, after the project, saying, “Oh man, I wish I did…” Not everything is going to be 100 percent exactly what you thought it was going to be.

The great part about this project is that there are things that I didn’t expect that came out even better than I thought and that’s a testament to the people that were a part of it. Not just in front of the camera either, but the people who really fought and worked in the trenches with us making sure that even after we shot the film that the look of it was great and that the color was perfect.