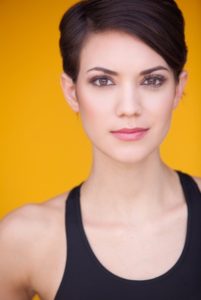 TrunkSpace: When did you know that you wanted to act for a living?
Lee: It’s very seldom that an artist gets their dream and passion be the thing that provides a living for them. I was attracted to acting from a young age. I remember being in 3rd grade and creating a stage adaptation of “The Princess Bride.” It came out to three full pages in third grader handwriting. Impressive, I know. It never went up because I wanted to play all the interesting parts. I was determined to play Westley and Buttercup; it proved difficult. (My understanding of acting as a collaborative art had yet to develop.) In elementary school I would visit the nurse’s office with fake ailments because I was bored, and Mrs. Clifford, our school nurse, always let me stay because I was entertaining. It wasn’t until I was 13 that I announced to anyone that I wanted to be an actor. I stood up and proudly declared, “I want to be an actor!” and everyone was like, “Ok.” Certainly, less of a reaction than I’d hoped for or expected. Now, as an adult, acting and writing provide me with the space to continue to create in my own unique way. If I am lucky enough to have my craft generate money that’s just gravy.

TrunkSpace: Was there a particular performance or actor/actress from your childhood that you remember being drawn to and inspired by?
Lee: I was older, maybe 17, when I saw Natalie Portman’s performance in “Léon: The Professional,” but it is work that continues to inspire me.

TrunkSpace: How did you decide to approach your career as an actor? Did you formulate a plan of how you wanted to attack what is known for being a hard industry to crack?
Lee: I was throwing spaghetti at the wall for years. And to some extent I still am, I think everyone does because this is such an individual experience. There is no handbook for being a successful artist. I take that back: “The Artist’s Way” is a pretty superb handbook for developing into a successful artist. I have been using Julia Cameron’s techniques for some time now, and I feel more in touch with my artist self. I don’t know that it is so much a “plan of attack” for this industry, but I prefer the route of “be so good they can’t ignore you” (as suggested by Steve Martin).

TrunkSpace: When did you decide to move away from your home and pursue acting as a career? How old were you at the time?
Lee: I moved to Los Angeles when I was 19. I did it in a relatively safe way, even though I knew no one here. I came out on an exchange program from Stony Brook University in New York. They offered students the chance to study for up to a year at a different school in the country… it’s one of the main reasons I chose Stony Brook in the first place. I came out here and kind of always knew that I would stay past the first year. I ended up choosing to remain in LA once the year ended and it’s been my home ever since, even though it did take me years to feel at home here.

TrunkSpace: Was that move an easy transition for you initially? How long did it take you to feel at home and find a good support group of friends and peers?
Lee: Well, my previous answer segued pretty nicely into this one, huh? Transitionally, it was harder than I realized at the time. I look back on the places I lived and the jobs I worked and I am so glad to have left some of those times behind me. I moved eight times in four years, living all over LA. It took me a good portion of those first four years to feel comfortable here and to actually begin liking the things LA has to offer. I certainly hated Los Angeles for a good amount of time. The traffic, the sprawling city, how self-involved some people can be, the plastic outward appearance people put on… it all bothered me. But eventually, I began to meet people that seemed to understand me and with whom I could connect. I met my best friend Cruz in 2009, he’s been my family here ever since. Whenever I introduce him to someone I tell them that he was my mother in another life, because I’m weird, but also because it’s true (probably). He is a comedian and an actor so he understands the stress of being an artist and he has always been my biggest fan and support system.

TrunkSpace: What has been been your biggest break in terms of a particular role or project thus far?
Lee: I got the opportunity to film an indie comedic horror movie, “Deadly Retreat,” a few years back. It was a week-long shoot; I had an amazing time. We were on location in Idyllwild, CA, which is outside of LA 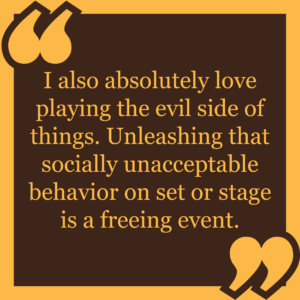 about 3 hours. It’s up in the mountains and we were filming in February so there was snow on the ground; it felt like we were far away from Los Angeles. Jonathan Bennett, who I knew from his role in “Mean Girls” (Aaron Samuels), played the lead role. And the hilarious Pete Gardner played the serial killer. Having him on set was great, we were constantly laughing.

TrunkSpace: Is there a specific type of role you’d like to take on or a specific genre that you feel more at home in?
Lee: I love working in comedic roles. Being on set when you’re filming a comedy is really special. I’ve always found my deepest connections with people that are willing to play along, and comedy lends itself to that experience. I have been studying improv at MI’s Westside Comedy Theatre, and the community there is unlike anything I’ve experienced. I also absolutely love playing the evil side of things. Unleashing that socially unacceptable behavior on set or stage is a freeing event.

TrunkSpace: What would you say is the greatest strength an actor/actress can have outside of acting ability itself?
Lee: Self-awareness. The world needs more people who are self-aware. It’s something I actively work on, because I often have found myself in situations where I see that I have not been listening to my internal voice and then I feel trapped by no will of my own… except that it is 100 percent through my own doing. When I take a moment and really ask myself, “What is going on? How do I feel? What do I want?” if I answer honestly I know I will lead myself into the right direction. Self-awareness helps us to set appropriate boundaries and goals. It provides us with the ability to develop a trusting relationship with ourselves. The more self-aware actors can be, the better they can serve their roles. When you know how you feel in your daily life, it makes acknowledging and acting on those feelings easier when you are in your craft. 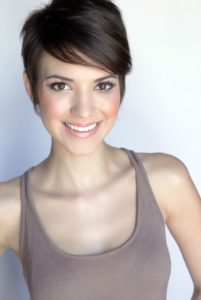 TrunkSpace: What is your ultimate dream when it comes to your acting career? Where would you like your path to lead?
Lee: I want it all. I want to write, act in, and direct a feature film. I have been irritated in the past when reading a script or watching a movie, bothered by the dialogue, saying to myself, “No one talks like this.” And so I began writing. I’ve been writing for “The dïck Plays” for several months; we receive a theme the night before the performance, and we have until 11am the next morning to write our 10 minute long play. It is a great exercise and it has helped me to develop my writing style. I also have been participating in “The Café Plays” at the Ruskin Theater for a few months. Currently, I am writing a piece I hope to film.

TrunkSpace: What advice would you give another young aspiring actor/actress who is considering moving away from home to pursue their dream?
Lee: Stay home there’s too many of us. Just kidding. Do it. If it’s what you want, then go for it. Why shouldn’t someone feel the pull to the arts and follow that feeling? It’s a beautiful life being an artist. It’s hard, for sure, but it’s a life unlike any other. Tapping into the vulnerable place, that delicate, susceptible piece of ourselves is worth all the hard work, and all the unknowing that comes along with being an artist.

TrunkSpace: Where can people (and casting directors) learn more about you?
Lee: Check out my website at DeidreLee.com