With season 4 set to drag more rotting corpses into your homes starting tonight, we sat down with series star Keith Allan to discuss his surprising journey as Murphy, why “Z Nation” is not your average zombie apocalypse show, and what his first experience directing an episode was like.

TrunkSpace: As a series, “Z Nation” takes a lot of twists and turns. How much of Murphy’s overall journey was present creatively in those early days when you were just diving in?
Allan: Well, I knew the overall idea for the character. The basic idea was that Murphy carried the cure and there was a road trip involved. That was pretty much all I knew – and that he had a chip on his shoulder, but that was the extent of it. It’s just been a thrilling surprise. You’re kind of like, “Oh, now I get to put on a pimp outfit and mind control zombie strippers?” How fun is that? And unexpected.

So, yeah, it’s great but it’s certainly been a surprise to me, every few weeks, about what’s coming up next for the old Murph.

TrunkSpace: Were there any performances choices that you made in those early days of the character that have sort of paid off 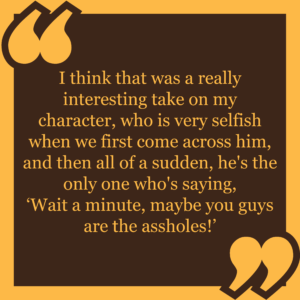 in ways that you never expected they would given the surprises you’ve come upon with Murphy over the years?
Allan: Yeah, for sure. The great gift I was given with this character was that he’s truly evolving. Not only as a human being, but as a half-zombie. He’s a character or a species that we’ve never seen before. So, luckily it’s given me a lot of leeway, I feel, in what I can do with him. We’re sort of in uncharted territory because he’s not really a human. He’s part animal. I take a lot of liberty that I wouldn’t with a regular human being.

At the very beginning of the show, I approached him as a very sort of damaged, timid animal who’s been through a lot, and certainly was not considered a force to be dealt with. But as Murphy changed and as his circumstances changed, and as he grew stronger, it was really easy for me to move into that without having to really justify a lot of it because it’s sort of built into his DNA. It’s just who he’s becoming. So that’s been a great gift because I’ve been able to morph from one version of Murphy to another fairly fluidly.

TrunkSpace: And what’s great about that is that the viewer is in on the physical change just as much as they are the emotional one.
Allan: Oh yeah. And it’s not only the color of my skin, but it’s also the texture of my skin and what my scars are doing because I have this whole series of scars on my chest from the zombie bites. So yeah, he’s morphing and changing and I, quite frankly, think that’s one of the reasons the audience has gravitated towards him, because you don’t know what’s next for him. And luckily, it’s been written in, and I’ll take some credit for it, that the audience has some partial empathy for this guy. I mean, in spite of everything, the bad decisions that he’s made in his life, he’s truly a victim of his circumstance. I think people, in a sense, see that he’s justified in being a dick. He’s kind of got the right, you know? He didn’t ask for any of this.

TrunkSpace: You talked a bit about the surprises you discover week to week, from the pimp outfit to being able to control the minds of zombie strippers, but has there been anything that has surprised you from a performance standpoint? Something where you went, “Whoa, I never thought I’d be going here with old Murph?”
Allan: Well, I have to say, without giving too much away, I get to go some places in this upcoming season that I really wasn’t expecting to go. And so that’s been exciting for me to explore a whole other side of this character that I didn’t really see as part of the overall story when I initially got on board.

The season has been interesting. There’s a couple of really powerful things for my character, and really dark things, too. And one of the things that I can talk about that was a little unexpected was Murphy’s empathy for the zombies. We hit on that early in season 1, that Murphy was the only one who’s saying, “Wait a minute, maybe they’re not as bad as you guys think they are. Maybe you’re taking everything at face value. Maybe there’s someone still in there. Maybe there’s still a consciousness. Maybe, you know, there’s some humanity left inside of these people.” He’s able to connect with them in a way that no one else was. And so, I think that was a really interesting take on my character, who is very selfish when we first come across him, and then all of a sudden, he’s the only one who’s saying, “Wait a minute, maybe you guys are the assholes!” He’s really sort of throwing up a mirror to these people who think they’re doing good just by slaughtering these people and he’s the one who’s saying, “Maybe you guys are the monsters.”

I think it’s a great social commentary in the bigger sense of in that we look at the disenfranchised and the way that they are judged solely based on what people’s perception of them is. And it’s a limited perception of them, I should say.

TrunkSpace: It’s also a classic theme, going all the way back to original Frankenstein.
Allan: Exactly!

TrunkSpace: The show is tonally so different than anything else you’ll find on television. Do you think that’s part of what’s drawn such a loyal fan base, the fact that it feels unique compared to anything else they can find on other channels?
Allan: For sure. We’re definitely bringing much more of a graphic novel feel to this show. And I hear it constantly from fans that they were prepared to hate our show, simply because they thought we were doing another “The Walking Dead” knock-off. I think they clued in early on that we were, sort of, playing in a whole different world. I mean, you couldn’t miss it. Once a giant wheel of cheese rolls over a bunch of zombies, we ain’t the same show. (Laughter) And so it certainly became part of what people were drawn to because they didn’t know what to expect from us next.

We really struck a nice balance between the humor and the horror and the drama. We get to play in all of those worlds, which is great as an actor. I’m not on a straight show – it’s got all kinds of wacky twists and turns and different styles within it. Even within some of our seasons, there’s one episode that will just be a goofball episode – the whole thing is goofy – and then there are some that are more heavily dramatic. And for the fans that I talk to often, it’s the humor. “The humor just keeps bringing us back. You guys crack us up and then you break our hearts.”

TrunkSpace: In a lot of ways “Z Nation” is the indie band that they discovered and sort of view as “their” band.
Allan: Right! For sure. I love that.

TrunkSpace: We know that you’re also a writer and a director. Is there an interest or opportunity for you to step behind the camera and helm an episode of the show?
Allan: Brother, I’m glad you asked that, because actually, I got the opportunity to direct an episode this season.

TrunkSpace: Congtrats. That’s awesome.
Allan: Yeah. I got to be in the writers’ room for the creation of the episode, and the writer who actually penned the script, her name is Delondra Williams, is someone whom I have collaborated with on a couple of zombie movies for Syfy. I got to really help shape and mold the episode, which was great for me because I really know the characters. And she’s very talented, so it was great to get to collaborate with her because I love working with her. And then to get to direct something that I had an integral part in creating – I love that. I’m already envisioning it in my head when we’re chatting about it and when we’re writing a scene, so I think it’s super helpful to have the chance to play in both of those worlds.

So, yeah, I got to direct episode 4.4 this season, and in fact, I was just looking over some of it now for the color correction and looking at the finishing touches on this thing. And of course, you’re never quite done with it.

TrunkSpace: It’s a big undertaking, especially when you’re also starring in the show.
Allan: I have to say, it’s probably one of the hardest things I’ve ever done in my life. This season, especially, we are shooting super fast. Because of budget constraints, we’re now shooting five-day episodes, which is insane for a show that has special effects, special effects makeup, fights, a substantial cast, and you know, these goofy gags that we pull off. And initially when I had been given the opportunity to direct, it was decided amongst the producers and myself that it would be an episode that I would not be heavily featured in. Well, I don’t know where that idea went out the window, because I’m in about 75 to 80 percent of this episode. (Laughter) So I’m not only acting in it, but I’m directing. I was running around behind the camera and in front of the camera and behind the camera and… it was very, very challenging.

TrunkSpace: And yet at the same time, it was probably super addicting and you want to jump right in and do it again, right?
Allan: Yeah! I totally want to do it again because now I learned so much from doing it. I’m like, “Let’s just do it one more time, because now I know what the hell I’m doing!”

Season 4 of “Z Nation” kicks of tonight on Syfy.