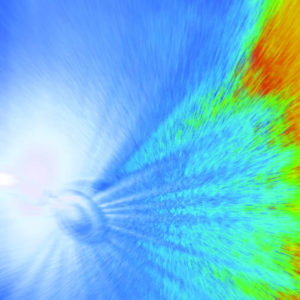 Latest Album/Release: Sleeping with the Lights On

TrunkSpace: How would you describe your music?
Grimm: It’s rock ‘n’ roll, I suppose. We started off doing a fairly straight alt country type of thing, but over the past eight years we’ve been drifting away from that sound. There’s still a country aspect to it, but I think I’ve been writing more rock songs. Then again, some of the songs on the new record sound like country. Maybe I should say that the music is authentic.

TrunkSpace: From an outside perspective, the Americana scene has grown leaps and bounds in recent years. Have you seen the same thing having been a part of the scene itself since first forming in 1998?
Grimm: Yeah, it’s funny to see that word “perspective.” In many, many, many ways the Americana scene or artists have really maintained their dignity or truth in purpose… some of it can get kind of hokey… but people like Steve Earle have really kept the quality up. Jason Isbell as well. And that’s where a bigger shift is about to happen in the mainstream with folks like Isbell and Sturgill Simpson cracking through all of the commercial junk.

As far as June Star… we’ve made some progress over the years, but it’s hard to get attention from folks. It’s harder and harder to get people out to shows. When I started writing the new bio for the SWTLO one-sheet, I started with the line, “June Star is a band that just keeps showing up.” So, from the perspective of attrition, we’re doing great!

TrunkSpace: As already stated, June Star has been writing and performing for nearly two decades. How has the band changed most in that time?
Grimm: Oh, the lineups change a lot. When the original members came and went I was kind of forced to figure out what I needed and what I wanted… since then it’s been a rotating cast. If a song is well written, it doesn’t matter if it’s two guitars, bass, and drums or one guy playing spoons.

TrunkSpace: Two decades of life is a lot of experience to play out in song. Has the subject matter of June Star songs changed since you wrote your first song to where you are now given that you yourselves have no doubt changed over time?
Grimm: As Mark Mulcahy of Miracle Legion said about songwriting, and I’m paraphrasing, “When I started writing songs I wanted to save the world. I found out pretty quickly that I couldn’t, so I decided to save myself and prove to others that it can be done.”

A lot of the early material from “Songs from an Engineer’s Daughter” (2000) and “Telegraph” (2001) was really playing off of Americana aesthetics… trains, swamps, weddings. They’re great songs, but they also tend to function as fiction and they are really disconnected from me. They weren’t my voice or a voice that sounded real, to me. That’s why, for the most part, we revisited some of those songs from previous records on our new one.

The goal in songwriting is to shape a voice to communicate an idea or an emotion, and the music is the delivery device. The music, of course, can be more than that… it adds colors, shadows, saturation…

My songwriting has really shifted to a kind of observational, everyman type of thing… or every human. Love and loss. Each song certainly has a piece of my experience. 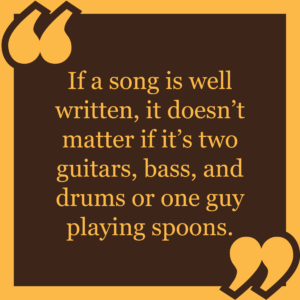 Also, I’ve ruined a lot relationships, so I tend to write about that a lot.

TrunkSpace: What is the most universal theme that resonates most with listeners? Is it love? Is it loss? Is it something else entirely?
Grimm: Many times on stage I introduce every song, “This is a song about love.” Usually loss… weird, huh? I don’t think we all just commiserate over the loss, but it’s kind of nice to know that someone else has been there too.

TrunkSpace: You sell June Star sunglasses. Who is the mastermind behind that genius merch concept and have you booked more outdoor shows to inspire sales?
Grimm: The sunglasses are my idea. I spend a lot of time thinking about how to get people to listen to the records… more and more I hear, “CDs? I don’t even have a CD player anymore!” And I thought, “What would be a dual purpose item, cheaper than a t-shirt, that we can stick a download card on and people might buy?”

We’re still paying those off.

TrunkSpace: Sticking with the merch idea, what is the best (and most outside-the-box) way to get your name and music out there in a day and age that is dominated by social media?
Grimm: You know, I have no idea.

The more I work on this stuff the more it seems that social media is one large swirling whirlpool of digital voices that are yelling at the same time. So, I’ve been reaching out to people in a more analog manner through a letter writing campaign. I have become so fatigued with social media that I tune out. The online world was a great place when we all got connected, but now with that “On Demand” ideology commanding everything, we’ve sort of morphed into a place where we say, “Yeah, I’ll listen or watch it later because I don’t have to right now.” And with live streaming and concert windows and all that stuff, it’s becoming easier to never go out or never look away from a screen. That concept or execution of experiencing music is unsatisfying and loses the point.

I’ve been working on a subscription service through Bandcamp. Junestar.bandcamp.com/subscribe will get you there. The deal is that someone subscribes and they get my entire back catalog… 14 – 15 records… and I write, record, and publish an exclusive song just for subscribers. I haven’t had huge success so far, but with anything, it will be a slow build.

TrunkSpace: Having been performing for nearly two decades, you must have quite a few stories to tell about your time in clubs and on stages. That being said, what is the craziest experience that comes to mind?
Grimm: One of the funnier things that happened was on a tour in 2004. We were playing a show at Nancy Raygun with Mike Roy and J Roddy Walston and Business (a few years before they got big), and J Roddy and Mike Roy accidentally locked their keys in their van. After some intense negotiations, we agreed that June Star should open the show and hopefully the Pop-n-Lock guys would get there soon.

Attendance was pretty sparse, it was a Tuesday I think, and to make things a little more hopeless it was raining torrentially.

About five songs in, this older woman, maybe borderline elderly, maybe elderly before her time… okay, let’s say that she had done a lot of living… she comes swaying up to the front, dragging so hard on a cigarette that the lit end seemed to burn more yellow than orange. She swirls around, making no eye contact and throws all this money at us and then lurches away.

We all look at each other and laugh, just having a good time. During the rest of the set, while playing, I started looking at the money on the stage, and I start counting it up in my head, and I start to get a little excited. I know the door is not going to make much money, and if we’re lucky, we’ll sell a CD; eventually, the set winds down, we pack up the gear, I gather the cash and count it. $100.

That pays for our gas to Alabama! Awesome. Jay Filippone, a guitarist with us at the time, and Tom Scanlan, who played mandolin with us up until the end of that year, they corner me and say, “Hey man, that woman doesn’t know what she’s doing… we should give the money back to her, it’s the right thing to do.”

Both of them felt bad for her and said that they were at least going to thank her for the tip and offer her a CD. I shrugged, “Sure!”

So, they approach her at the bar and Tom says, “Excuse me, thank you so much for the tip. We really appreciate it.”

She turns to him, squints and yells with a burst of cigarette smoke and a voice that makes you clear your own throat, “FUCK YOUR ASS!”

There was this other time we were opening for John Doe of X and he forgot something on stage. We were sound checking and he came up to me and introduced himself. As I turned to say hello I couldn’t help but be completely stunned by his absolute luminous cerulean ice gray blue eyes. I think I introduced myself as Blue Eyes.

TrunkSpace: Looking beyond your accomplishments, what do you hope to still accomplish? What’s on your creative bucket list?
Grimm: Make another record, book another show. 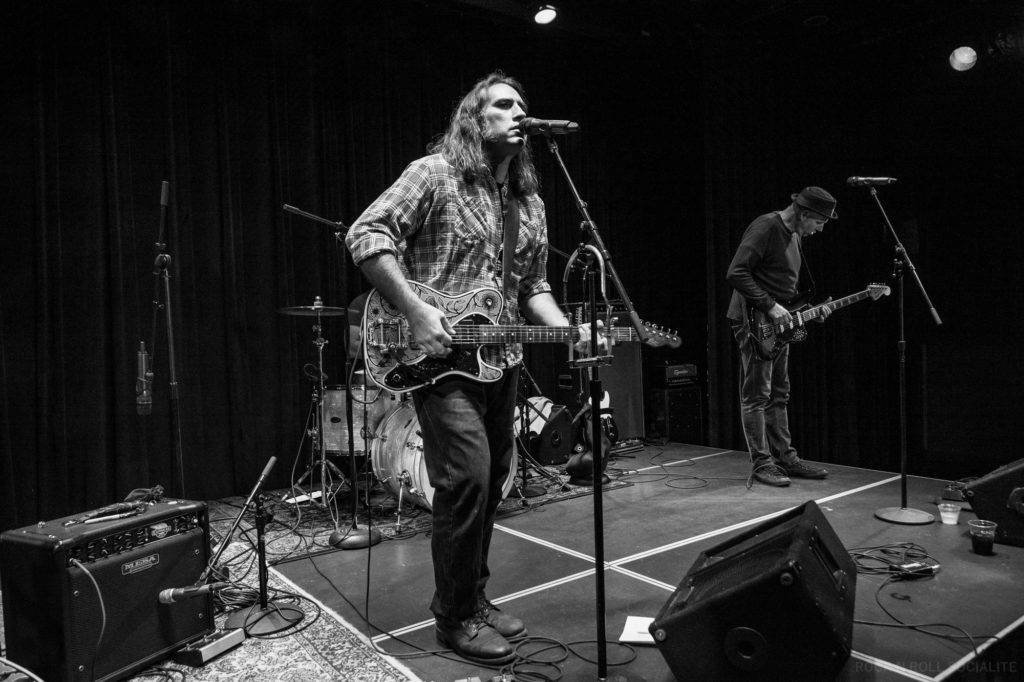 TrunkSpace: Are you someone who needs music in your life? Is it an extension of who you are, and if it was taken away, would you be able to find happiness?
Grimm: I do need music. It’s a great connector between ourselves and our world. We work out most of our problems or emotional needs through a song or a record. To be without it would be devastation.

I guess I would try my hand at writing fiction… or poetry. Maybe film. That might be fun. Or landscaping.

TrunkSpace: What can fans expect from June Star for the rest of 2017?
Grimm: Oh… we’re going to be touring… solo, duo, trio, quartet. October will find us back in the studio to record the next record, which will come out in the Spring of 2018. There may be some podcasting stuff too…

All I know is that June Star will be showing up, somewhere.