Music has many functions. People listen for different reasons. Some bind songs to memories. Others use them as outlets of emotional deliverance. For singer/songwriter and multi-instrumentalist Joey Dosik, his own journey with music became a form of therapy.

While recovering from reconstructive knee surgery, Dosik found a balance between physical healing and expressive restoration. Marrying his love for music to the pastime he’s most passionate about, basketball, the concept EP “Game Winner” was born. Recently re-released on Secretly Canadian and featuring four bonus tracks, the mini-album serves as a harbinger of the full-length he’s currently working on, one we’re eagerly looking forward to.

We recently sat down with Dosik to find common basketball ground, what it’s like promoting “Game Winner” a second time around, and why you can hear a little bit of every genre in the music you listen to these days.

TrunkSpace: You’re a big Lakers fan. Full disclosure, we’re Boston guys.
Dosik: (Laughter) Right on. That’s cool. That’s fine. You know, I used to date a girl who is from New England and I remember finding her green Celtics’ Starter jacket in the closet one day and just being terrified at the sight of it.

TrunkSpace: You heard the record scratch to a halt in your mind?
Dosik: (Laughter) Completely. I’ve got respect for Boston fans though. Boston fans are great.

TrunkSpace: When fans of two rival teams are in the same room, there needs to be a “love the game” policy taken.
Dosik: Exactly. That’s a good policy.

TrunkSpace: We just discovered “Game Winner” a few weeks ago, but for you it’s been a part of your life for some time now. Even with the re-release, do you feel like a creatively different person now than when you put that together?
Dosik: Absolutely. The EP sort of represents a moment in time that was vulnerable for me because I made it while I was recovering from reconstructive knee surgery and there’s something about that time that was… the EP sort of froze that moment forever for me. I’m a different person since then and I’m excited for some of the music that I’ll be getting out. I’m kind of finishing a full-length record here. But, yeah, I mean, you know, it was a moment in time where I tried to make the best of a tough situation and I’m so thankful for it because it allowed me to bring the thing that I love as much as music, which is basketball, kind of into my creative fold and it’s been a blessing for me.

TrunkSpace: How do you go about getting into the mindset to promote the record all over again as you’ve already creatively moved on from it? 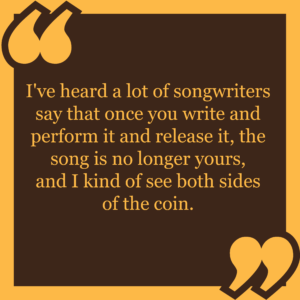 Dosik: Well, I spent a lot of time thinking about songwriting, and in songwriting I always try and see if there’s a way that I can make the songs sort of… what’s the right word… make the songs a bit adjustable to different situation. So, with a song like “Game Winner,” or a song like “Running Away,” or “Competitive Streak,” I feel like I can do the songs in a lot of different ways. I can do them with a full band. I can do them myself. I could do them in a broken down setting. I played “Game Winner” at the Garden last year. I can play it just me and a piano.

So, the crazy thing about songs is that sometimes you write them and you say, “Okay, cool. Here’s this weird basketball love song.” But now looking back on what it is that I did, I realize that it really was a sort of music therapy and the song continues to bring different meaning to me in my own life as I get older. And the cool thing about “Game Winner” is that they’re going to just keep happening. I mean, we just saw last night how the women’s American hockey team shot a game winner in overtime. So, it’s kind of that, hopefully, songs can be the gifts that keep on giving.

TrunkSpace: And the beauty of songs is that they can mean different things to different people. Five people could sit down and listen to “Game Winner” and each one of them could pull something different from it.
Dosik: Right on. Yeah, that’s the kind of thing that really excites me, man. The fact that that’s happening just kind of makes it all worth while – all the blood, sweat, and tears that goes into making a record.

TrunkSpace: So on something like your new full-length, do you have more creative freedom than you did on “Game Winner” because that was specifically a concept album? Is there more open space to create?
Dosik: Definitely. Limitation can be oddly freeing, but the album that I’m working on is not just basketball related.

TrunkSpace: Do you consciously add multi-layered meanings into your music or do you just write what’s honest to you as a songwriter and then let people find in them what they may?
Dosik: I’ve heard a lot of songwriters say that once you write and perform it and release it, the song is no longer yours, and I kind of see both sides of the coin. It’ll always be mine because it came out of my brain, and like I said, the songs do kind of mean different things to me as I get older and go through different life experiences and continue to perform them, but, yeah, I’m more than happy to hand the songs off to listeners and let them find their own meaning in their own lives. That kind of stuff always excites me.

TrunkSpace: You play multiple instruments. We know there are probably multiple ways that you go about creating new songs, but is there one instrument in particular that usually serves as the launching pad for the earliest nuggets of songs?
Dosik: It could be a lot of different things. Usually it’s chords from the piano or a melody from my voice, or just words. It’s also fun to write to a drum beat. It’s also fun to write to a bass line. I think piano being my first instrument, and the voice kind of being so close to my body, I think those are the things that usually first inspire me.

TrunkSpace: You play the saxophone. We are lovers of all things ‘80s saxophone solos here and think we need more of them like Eddie Money’s “I Wanna Go Back.” Have you ever written a pop song specifically for the saxophone?
Dosik: When I was a jazz obsessed saxophone player I wrote many songs for the saxophone, but they weren’t pop songs. My family, every time they come to see one of my shows or when they listen to a track that I’ve made, they always say, “You know, you should really take out the saxophone again.” And so I’m getting the full-court press from the family to try and come up with it, and I would love to figure that one out. So, hopefully that’s next on the docket.

TrunkSpace: You’ve mastered many instruments, but are there any that you’d still like to take up and add to your repertoire?
Dosik: I don’t know if I’d call myself a master at any instrument. I can definitely play them and I still really desire to get better at all of the instruments that I play. I guess the one that I think about a lot right now is drums. I’ve played drums on recordings of mine but it’s an amazing instrument. It’s really just a bunch of instruments combined into one and I really enjoy recording them and getting sounds out of them. So, I guess drums is one that I’m thinking about a lot.

TrunkSpace: You’ve written and performed in many genres. As you look forward in your career, are you hoping to continue to expand your creative horizons and write without musical margins? Are you an artist who is willing to go anywhere creatively?
Dosik: Yeah. I feel like genres are just there for record stores and are there for people to write about it, honestly. There will never be a substitute for actually hearing music. It’s also a way that we communicate with others about what it is that we’re hearing, but I think the interesting thing about music nowadays is that everything is so boxed in so whenever you hear something it’s usually a combination of at least three genres of music. Nothing is necessarily that clear cut anymore. When you listen to pop music you’re hearing so many different types of music. So, yeah, I hope to continue to evolve and explore all things that inspire me.